Social Change in the Perspectives of Max Weber and Karl Marx

The concept of social change is one of the most tackled and discussed topics in sociology and politics as it touches a wide area human interest. In the perspective of an average layman, social change may simply viewed literally as a change that turns the current curse of events in the society for the better. Aside from this, this can as well be seen as a change that simply occurs under the context of a social system. Politicians would often talk about social change as a catalyst of development, equality and peace.

Don't use plagiarized sources. Get your custom essay on
“ Social Change in the Perspectives of Max Weber and Karl Marx ”
Get custom paper
NEW! smart matching with writer

They would always say that social change is what the world needs in order to provide a much better life for the people. This is the general and the more external view on social change. But if people will try to look deeper into this concept, they may find that there are a lot more into it than politicians’ promises and wishes for the country. They may find that although the concept of social change had been tried to be popularized by a lot of experts over the years, there are still more to it that meets the eye such as the more intricate and complicated details of the broad social system.

The reason why sociology has been a part of the academe is that philosophers and educators from the earlier times saw the need for the people to learn about the values and interests that are significant to their lives and how these things affect their way of living.

As a branch of social science, it can be understood that sociology indeed plays a vital role in making a lot of concepts and ideas about human dealings and systems more comprehensible for the people who have the greatest concerns and interests in them.

But in the venture of digging deep into the concept of social change, it may not help to refer to popular impressions on the topic, rather, one must go for the more comprehensive and theoretical explanations. But before these exhausting and tiresome details, having an initial notion and idea may help through going through the more general explications about social change. General Explications about Social Change In the aim of understanding social change, it may first help if people will understand the nature of systems.

Systems have been known to denote complex interrelations of individual factors, pieces, members or parts (Sztompka 4). Social change having the term social as its part connotes that it indeed has a lot to do with social systems. In this connection, social change deals with systems and not with individuals. And thus, the process of social change itself can be very intricate and detailed since it can be understood that social change may not be just about people, politics and government but rather, it involves a lot of other parts and considerations.

On the other hand, change can be very subjective and relative terms. It may have so many different meanings from different minds. But once it is related to sociology of social systems, it will definitely mean an entirely different thing. Social change has been seen to be a process to start from the inside (4). It is a process that occurs from the inside and then embraces a social system. But to be more detailed, a lot of experts have noted that social change is simply the difference between two states under the same system that succeeds each other.

Experts like Strasser and Randall would further explain that: “If we speak of change, we have in mind something that comes into being after some time; that is to say, we are dealing with a difference between what can be observed before that point in time and what we see after that point in time. In order to be able to state the differences, the unit of analysis must preserve a minimum of identity – in spite of change over time. ” -Strasser and Randall (qtd. in 4) Simply, this implies that when something is not the same anymore there is definitely a change.

However, in relating this idea to social change, it may seem a lot more technical. This is because when talking about social change, a study would usually involve alterations in detailed and complex systems. But no matter how technical and difficult a subject, it has still been a popular topic of research and exploration in the field of sociology. In this process of going deep into the concept of social change, people will definitely encounter a lot of popular notions about the subject. Over the years, the topic of social change has achieved a lot of different definitions.

Macionis would define social change as a form of transformation in the organizations in the society and in the though patterns and behavior (Macionis 1987, qtd. in 6); Persell would explain that social change is when people transform and modify the way the society is being organized (Persell 1987, qtd. in 6); while Farley would explain in details that social change happens when the changes and transformations in the patterns of behavior, social relationships, social structures and institutions over time (Farley 1990, qtd. in 6).

All these popular notions say that social change has something to do with the re-organization in people’s social systems. And in this process of re-organization, behaviors, relationships and institutions are being altered as well. However it can be noticed that none of these popular definitions explained where social change roots and what actually causes it. These things may indeed be known in a much deeper exploration on the theoretical aspects of the subject matter. This understanding of social change can be applied to a lot of relationships and connections in everyday life.

In the government, knowing the nature of social change may give the world’s leaders the idea of where betterment may root and what they can possibly do to start and stimulate such change. This may be in the form of having politicians understand that social change is more than just causing mobilizations but rather, it is on how they will be able to re-organize the social structure of their territory. Among individuals on the other hand, understanding social change may let them know where and how to start a social alteration which can do a lot in changing their society for the better.

But the process of understanding social change is not ending on these general definitions; rather, it would greatly help to go into the two major clashing yet very revealing perspectives on social change, that of Max Weber and Karl Marx. Max Weber’s Views on Social Change The basis of Max Weber’s address of his perspective on social change was generally coming from his argument about Karl Marx idea of social change. In his work, The Protestant Ethic, Weber stresses that change is not entirely about “the struggle of opposites” which was the idea proposed by Karl Marx.

Weber’s perspectives have been known over the years to be coming from his religious beliefs. As a believer of God, Weber’s ideas can be observed to root from values and asceticism. He opposes most of Marx’s views on social change. In his view, it is not the economic forces alone that produce change. For him, this view of Marx is so materialistic that it fails to see the other factors such as religious convictions, beliefs, and stands.

Social Change in the Perspectives of Max Weber and Karl Marx. (2017, Mar 15). Retrieved from https://studymoose.com/social-change-in-the-perspectives-of-max-weber-and-karl-marx-essay 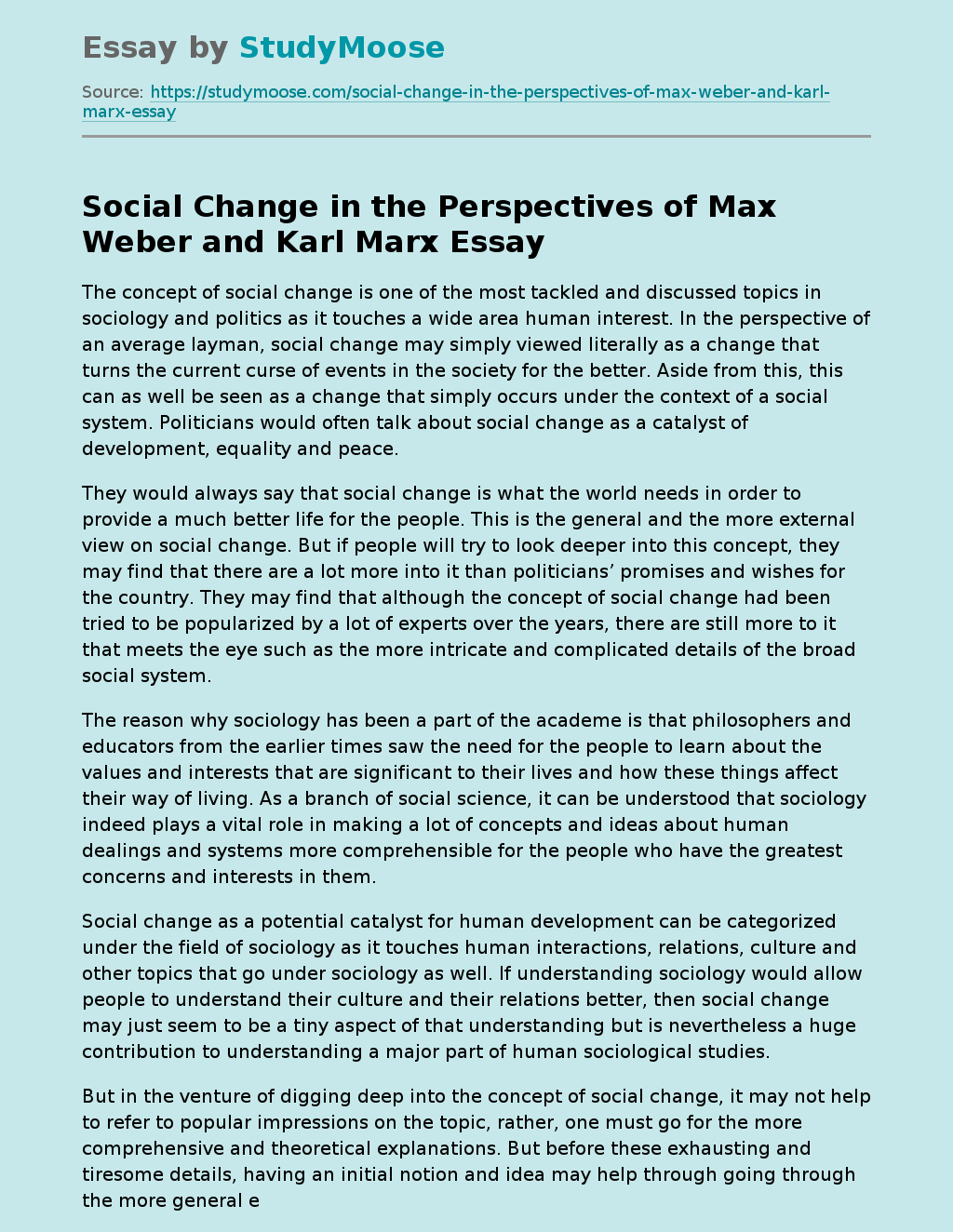