Children need to have both parents in the home to have a balanced life. Both socially and mentally but, if the parents cannot get along and the children are being raised in a constant battleground, socially and mentally this can be more damaging to them. This can lead to trust issues and other relationship problems. Parents who abuse each other will most likely have children who will become involved in abusive relationships. Children whose parents have divorced and the absent parent are still involved in their everyday life still benefit from both parents.

Don't use plagiarized sources.
Get Your Custom Essay on Social and Mental Effects to Broken Family Status Just from $13,9/Page

The reversal of the legal status of divorce will entail nothing less than a cultural revolution because American culture now embraces divorce in law and in behavior. It’s easy acceptance once rejected as scandalous.

Even if they themselves have divorced the men and women who shape popular opinion, as well as the policymakers in state legislatures who are responsible for domestic law should begin to challenge this practice. The devastating effects of divorce on children just might provide these leaders with the motivation to start such a cultural revolution, or at least to question the direction the nation has taken. The plight of children may give Americans the moral courage to overcome a fear of raising this delicate subject.

If Americans do not overcome this fear, we will lock ourselves into inaction and lock the nation into a downward spiral of weakening effects and diminishing social capital because divorce diminishes children’s future competence in all the major institutions. In family life, divorce permanently weakens the relationship between children and parents. It leads to destructive ways of handling conflict, diminishes social competence, leads to early loss of virginity, and it diminishes young adults’ sense of masculinity or femininity. It leads to more trouble in dating, to more cohabitation, to higher divorce rates later in life, to higher expectations of divorce, and to less desire for children.

* In religious life, divorce diminishes the frequency of worship of God, and recourse to Him in prayer. * In education, divorce diminishes learning capacities and high school and college attainment. * In the marketplace, divorce reduces household income and massively cuts the life-wealth of individuals. * In government and citizenship, divorce massively increases crime rates, abuse and neglect rates, and the use of drugs. * Also, divorce weakens the health of children; even their life spans will be shortened.

* Finally it increases behavioral, emotional and psychiatric risks, including suicide. The effect of divorce on children’s hearts, minds and souls range from severe to mild, from seemingly small to massive, and from short term to long term. None of the effects apply to every child of divorce, nor is it likely that any one child has suffered all the effects. Nonetheless, the one million children who see their parents’ divorce each year are affected by the trauma. There is no way to predict how any particular child will be effected or to what extent, but it is possible to predict its effects on society. They are numerous and very serious. The major issue for researchers is no longer what the ill effects of divorce are, but the depth and length of persistence of these effects on children, and on their future children and grandchildren. 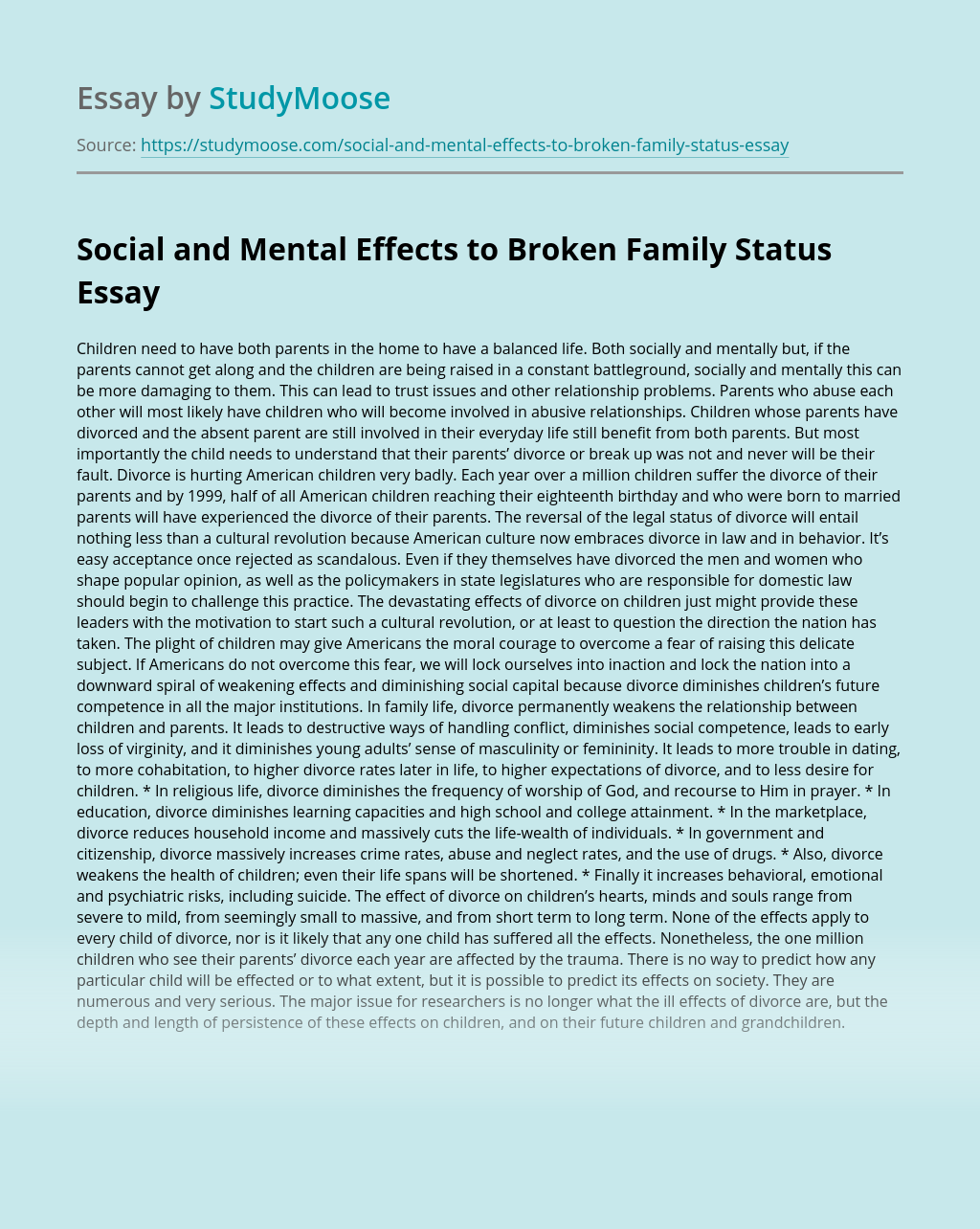 Effects of Broken Family to Students

Family is the basic components of the society. And the parents are the most important source of youth’s behavior, which effect to their outlook in life. A home is where a family lives. It may be alternated to the word ‘house’ but a house is more appropriately referring to the material structure, whereas ‘home’ refers...

Fall seven times get up eight is an old proverb my grandma and mom use to tell me. Hello, my name is Nicole and I would like to tell you some details about myself. First of all I would like to start with my family. I have a brother (age 9) and a sister (age...

Early marriages are marriages that happen between people under the age of eighteen. Such marriages are spread all over Palestine. In particular, they occur in Palestinian rural rather than urban areas. These practices take place for several reasons. One very important cause is the religious definition of adulthood which is more related to physical and...

Blended families, according to William P. Fuller the author of Preparing for Blended Families, are those comprising of at least one spouse who has a child or children from a prior relationship. These types of families “are becoming increasingly common and present a unique challenge when creating an estate plan” (Fuller 1). Similarly, according to...

The Grave by Katherine Anne Porter

The Grave “The Grave,” by Katherine Anne Porter, is about two young children’s lives and how their past affected them while growing up. Both Paul and Miranda are related as brother and sister.Paul was a twelve year old boy who really enjoyed hunting and gathering skeletons.Miranda was a nine year old girl who use to...