One of the major problems that the country faces today is the issue of broken marriages among Overseas Filipino Workers (OFW). One of the major problems of OFWs is the struggle of broken families, these are caused by the feeling of loneliness, and the feeling of freedom from the long distance with their wives or husbands. This may also be caused by a situation that OFWs encounter, which is an active extramarital relationship (Pinoy OFW, 2012). The main problem here is the necessity to work abroad.

Don't use plagiarized sources. Get your custom essay on
“ Broken marriages among Overseas Filipino Workers ”
Get custom paper
NEW! smart matching with writer

If this situation is not handled, the consequences not only affect the couple but it greatly affects the child. The parents are most likely to be emotionally, financially troubled, and the worst is being socially stigmatized. (Government of Singapore, 2006). Severe psychological and behavioral problems are two to three times more prone to children with divorced families compared to non-divorced ones, Hetherington’s study (Dowling & Barnes, 2000). The solution to this problem is to deal with the local problems of the country.

According to Dr. Clement Camposano (as cited in Susan, 2012) a migration anthropologist and senior instructor of the University of Asia and the Pacific (UA&P). The decision to go abroad is an economic choice, many Filipinos aim to invest to further their goals, professionals are paid poorly locally compared to the income opportunity that are open in different countries.

A reason why Filpinos go abroad is the fact that companies locally offer low salary. This local disruption leads to the problem on which families have to be separated and possibly destroy their marriage.

There are top reasons why Filipinos work abroad; one of them is the unstable economic situation of the country (Pinoy OFW, 2009).the climate changes, calamities and political demise are some factors that lead the Philippines into an unstable situation (Lopez, 2014). Filipinos are also in the face of struggle for employment in the Philippines, this may be the prevailing cause of why Filipinos go abroad in the first place (Pinoy OFW, 2009). According to the National Statistics Office of the Philippines (NSO, 2014) the Philippine unemployment rate averaged 8.96 since 1994 until present time, the Philippines decreased to 6.70 from 7 in the second quarter of the year. The Philippines has a high uneployment rate. These are only some of the reasons why Filipinos work from afar from their families. The solution could only be done by the country’s leaders.This paper aims to suggest only an option to solving the crisis, the solution suggested is not the only answer to the phenomenon. A broken family could be prevented by self disciline and devotion to their families (Pinoy OFW, 2012). As said earlier, this solution could only be applied to the leaders. The leaders should aim to fix the problems on a smaller scale, within local bounderies. If the suggestion is to be taken in to action, the issue of broken families could be solved. Filipinos would not have the necessity to go abroad if the opportunities in the country are upright and befitting to the professional attainment of its members.

Broken marriages among Overseas Filipino Workers. (2016, May 17). Retrieved from https://studymoose.com/broken-marriages-among-overseas-filipino-workers-essay 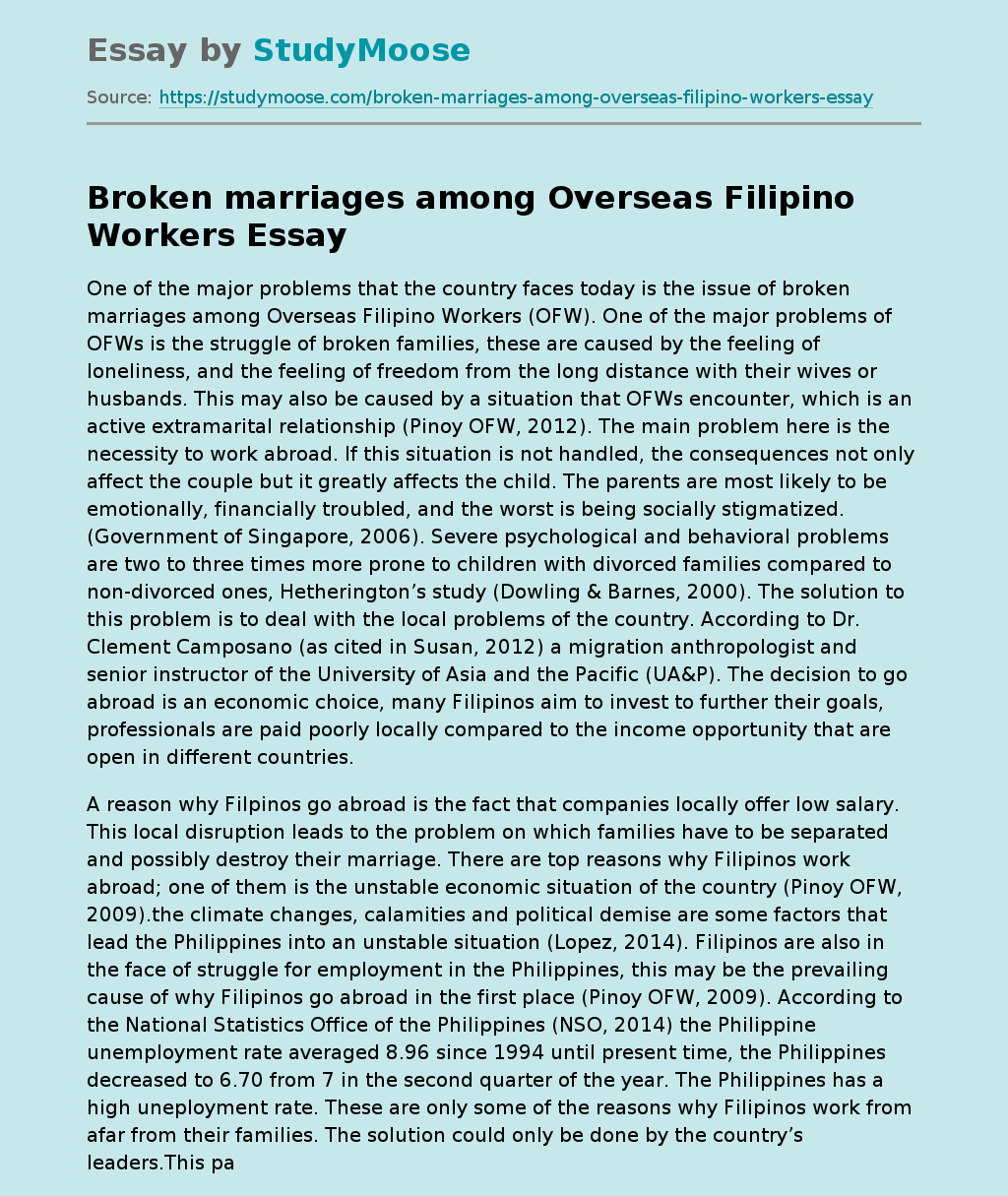