Don't use plagiarized sources.
Get Your Custom Essay on Smartphone Speech Just from $13,9/Page

The most common mobile operating systems (OS) used by modern smartphones include Apple’s iOS, Google’s Android, Microsoft’s Windows Phone, Nokia’s Symbian, RIM’s BlackBerry OS, and embedded Linux distributions such as Maemo and MeeGo. Such operating systems can be installed on many different phone models, and typically each device can receive multiple OS software updates over its lifetime.

The distinction between smartphones and feature phones can be vague and there is no official definition for what constitutes the difference between them. One of the most significant differences is that the advanced application programming interfaces (APIs) on smartphones for running third-party applications can allow those applications to have better integration with the phone’s OS and hardware than is typical with feature phones. In comparison, feature phones more commonly run on proprietary firmware, with third-party software support through platforms such as Java ME or BREW.

An additional complication in distinguishing between smartphones and feature phones is that over time the capabilities of new models of feature phones can increase to exceed those of phones that had been promoted as smartphones in the past. History Early years It was designed in 1992 and shown as a concept product that year at COMDEX, the computer industry trade show held in Las Vegas, Nevada. It was released to the public in 1993 and sold by BellSouth. Besides being a mobile phone, it also contained a calendar, address book, world clock, calculator, note pad, e-mail client, the ability to send and receive faxes, and games.

It had no physical buttons, instead customers used a touchscreen to select telephone numbers with a finger or create faxes and memos with an optional stylus. Text was entered with a unique on-screen “predictive” keyboard. By today’s standards, the Simon would be a fairly low-end product, lacking a camera and the ability to download third-party applications. However, its feature set at the time was highly advanced. The Nokia Communicator line was the first of Nokia’s smartphones starting with the Nokia 9000, released in 1996.

This distinctive palmtop computer style smartphone was the result of a collaborative effort of an early successful and costly personal digital assistant (PDA) by Hewlett-Packard combined with Nokia’s best-selling phone around that time, and early prototype models had the two devices fixed via a hinge. The Communicators are characterized by a clamshell design, with a feature phone display, keyboard and user interface on top of the phone, and a physical QWERTY keyboard, high-resolution display of at least 640? 200 pixels and PDA user interface under the flip-top.

The software was based on the GEOS V3. 0 operating system, featuring email communication and text-based web browsing. In 1998, it was followed by Nokia 9110, and in 2000 by Nokia 9110i, with improved web browsing capability. In 1997 the term ‘smartphone’ was used for the first time when Ericsson unveiled the concept phone GS88 the first device labeled as ‘smartphone’. Symbian The Nokia 9210 Communicator (Symbian 2000 model smartphone)In 2000, the touchscreen Ericsson R380 Smartphone was released. It was the first device to use an open operating system, the Symbian OS.

It was the first device marketed as a ‘smartphone’. It combined the functions of a mobile phone and a personal digital assistant (PDA). In December 1999 the magazine Popular Science appointed the Ericsson R380 Smartphone to one of the most important advances in science and technology. It was a groundbreaking device since it was as small and light as a normal mobile phone. In 2002 it was followed up by P800. Also in 2000, the Nokia 9210 communicator was introduced, which was the first color screen model from the Nokia Communicator line.

It was a true smartphone with an open operating system, the Symbian OS. It was followed by the 9500 Communicator, which also was Nokia’s first cameraphone and first Wi-Fi phone. The 9300 Communicator was smaller, and the latest E90 Communicator includes GPS. The Nokia Communicator model is remarkable for also having been the most costly phone model sold by a major brand for almost the full life of the model series, costing easily 20% and sometimes 40% more than the next most expensive smartphone by any major producer.

In 2007 Nokia launched the Nokia N95 which integrated a wide range of multimedia features into a consumer-oriented smartphone: GPS, a 5 megapixel camera with autofocus and LED flash, 3G and Wi-Fi connectivity and TV-out. In the next few years these features would become standard on high-end smartphones. The Nokia 6110 Navigator is a Symbian based dedicated GPS phone introduced in June 2007. In 2010 Nokia released the Nokia N8 smartphone with a stylus-free capacitive touchscreen, the first device to use the new Symbian^3 OS. [16]

It featured a 12 megapixel camera with Xenon flash able to record HD video in 720p, escribed by Mobile Burn as the best camera in a phone,[17] and satellite navigation that Mobile Choice described as the best on any phone. [18] It also featured a front-facing VGA camera for videoconferencing. Symbian was the number one smartphone platform by market share from 1996 until 2011 when it dropped to second place behind Google’s Android OS. In February 2011, Nokia announced that it would replace Symbian with Windows Phone as the operating system on all of its future smartphones. [19] This transition was completed in October 2011, when Nokia announced its first line of Windows Phone 7. 5 smartphones, Lumia 710 and 800.

Smartphone market share For several years, demand for advanced mobile devices boasting powerful processors and graphics processing units, abundant storage (flash memory) for applications and media files, high-resolution screens with multi-touch capability, and open operating systems has outpaced the rest of the mobile phone market. According to an early 2010 study by ComScore, over 45. 5 million people in the United States owned smartphones out of 234 million total subscribers. Despite the large increase in smartphone sales in the last few years, smartphone shipments only made up 20% of total handset shipments as of the first half of 2010.

According to Gartner in their report dated November 2010, total smartphone sales doubled in one year and now smartphones represent 19. 3 percent of total mobile phone sales. Smartphone sales increased in 2010 by 72. 1 percent from the prior year, whereas sales for all mobile phones only increased by 32%. According to an Olswang report in early 2011, the rate of smartphone adoption is accelerating as of March 2011 22% of UK consumers had a smartphone, with this percentage rising to 31% amongst 24- to 35-year-olds. In March 2011, Berg Insight reported data that showed global smartphone shipments increased 74% from 2009 to 2010.

A survey of mobile users in the United States by Nielsen in Q3, 2011 reports that smartphone ownership has reached 43% of all U. S. mobile subscribers, with the vast majority of users under the age of 44 owning one. In the 25-34 age range smartphone ownership is reported to be at 62%. NPD Group reports that the share of handset sales that were smartphones in Q3, 2011 reached 59% for consumers 18 and over in the U. S. In profit share worldwide smartphones now far exceed the share of non-smartphones.

According to a November 2011 research note from Canaccord Genuity, Apple Inc. olds 52% of the total mobile industry’s operating profits, while only holding 4. 2% of the global handset market. HTC and RIM similarly only make smartphones and their worldwide profit shares are at 9% and 7%, respectively. Samsung, in second place after Apple at 29%, makes both smartphones and feature phones and doesn’t report a breakdown separating their profits between the two kinds of devices, but it can be intuited that a significant portion of that profit comes from their flagship smartphone devices. Up to the end of November 2011, camera-equipped smartphones took 27 percent of photos, a significant increase from 17 percent last year.

Due to the fact that we carry smartphones with us all the time, smartphones have replaced some functions of Point-and-shoot cameras, except the cameras with big optical zoom such as 10x. In early July 2011 the Pew Research Center released the results of a new study. The findings show that 35% of adults own smartphones, and those phones are the main source of Internet access for 25% of their users. The trends and adoption rates continue to climb and mobile devices and connections become a bigger part of the lives of more and more people.

You may also be interested in the following: essay smartphone 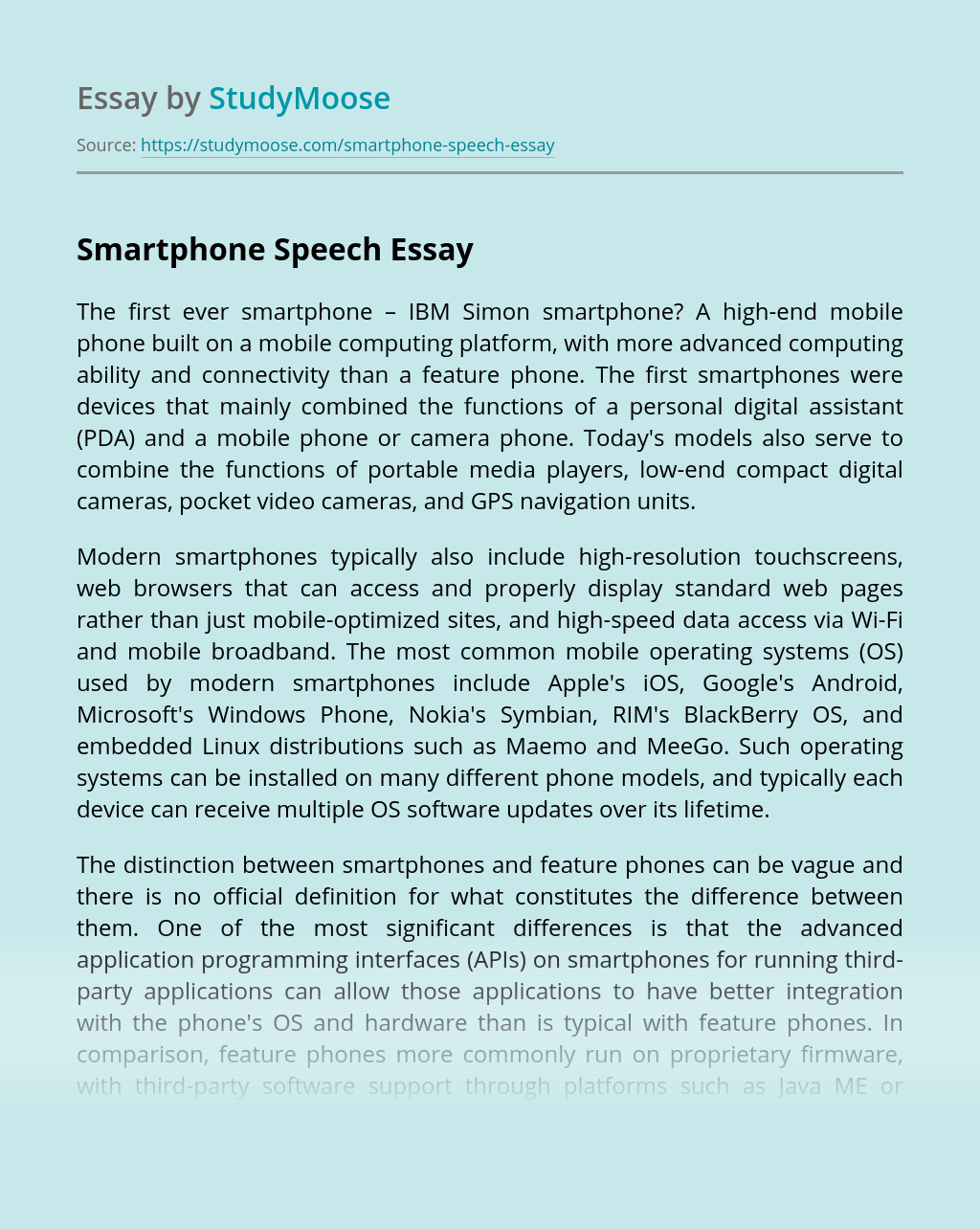