Sleep is a period of rest and revitalization, without it, a person will become very weak and start to go insane. The story of Macbeth, written by William Shakespeare in the Elizabethan, tells the tale of a man who was tempted by weird sisters to ambition and a greed for power. Macbeth killed the king to gain his throne. However after the murder Macbeth is unable to sleep properly. Sleep is one of the key images which recur throughout the play.

Don't use plagiarized sources.
Get Your Custom Essay on Sleep imagery in Shakespeare’s Macbeth Just from $13,9/Page

Sleep imagery in Macbeth is used to develop the theme of innocence, nature, conscience and guilt and reinforces the images of night, darkness, and evil.

Sleep is a symbol of innocence and goodness, one of the main themes in the play. Since Macbeth has done a deed of great evil, murdering Duncan, Macbeth is no longer innocent. And hence he is no longer allowed to sleep. Macbeth also realizes this himself after the murder and says, “[Macbeth] has murdered sleep, and therefore, Macbeth shall sleep no more” (II.

ii.39-40). Lady Macbeth is also an evil character and so she also can’t sleep properly. The actions which depict her as an evil character are beckoning evil “spirits/ That tend on mortal thoughts” (I.v.39-40) and persuading her husband to kill Duncan after Macbeth has resolved not to do it after thinking it through.

Macbeth and Lady Macbeth’s lack of sleep shows the guilt, which they are feeling and how much the murder of Duncan goes against their conscience. The lack of sleep is part of the punishment for Macbeth and Lady Macbeth for killing Duncan, as there is always a penalty for evil actions. This penalty was foreshadowed by the witches when they were plotting to punish the sailor by not letting him sleep and so “sleep shall neither night nor day/ hang upon his penthouse lid” (I.iii.19-20) meaning that the sailor will not be able to sleep in the day or night. Lady Macbeth is so full of guilt that she talks and walks in her sleep. She is always trying to wash her hands (V.i.) due to the guilt she is feeling. Guilt is also what leads Lady Macbeth to lose her mind and then commit suicide.

Sleep reinforces the theme of nature. Sleep is the natural way of healing the body. Sleep can heal the body in many ways. It can “knit up the raveled sleeve of care”(II.ii.34), which means it can solve problems by relaxing the mind. Sleep is “the death of each day’s life” (II.ii.35), meaning it is the end of the day which follows the beginning of a new day. Sleep is also able to ease the muscles and aches after a day from “sore labor” (II.ii.35). It is also the “chief nourisher in life’s feast” (II.ii.37), like food which nourishes the body. Nobody can survive without food; neither can anyone survive without having to sleep. And since Macbeth cannot sleep, he is forfeiting all of the advantages from a night’s rest. Lady Macbeth notices this and points out “You lack the season of all natures, sleep” (III.v.142)

Sleep imagery is also closely related to the night, darkness, and evil and they often work together. Sleep mostly happen at night, so there are many references of night and dark imagery when sleep is mentioned. Evil characters do not get to sleep and on the rare occasion they do, they dream many nightmares as “wicked dreams abuse/ the curtained sleep” (II.i.50). Banquo are also getting the “cursèd thoughts” (II.i.8) when he sleeps and so he resists the “heavy summons” (II.i.7) which call him to sleep.

Sleep is used in Macbeth to support many of the main themes. Sleep is corresponds to innocence and goodness as the characters who do not fit this description are not allowed to sleep as they are constantly haunted by nightmares. Lack of sleep is punishment for the evil characters, they often become mentally disturbed, “dwindle” and grow “peak and pine” (I.iii.14). One of the main causes of this lack of sleep is due to the guilt the characters are feeling. Macbeth and Lady Macbeth are feeling very guilty as the murder of Duncan totally goes against their conscience. Sleep is also the natural healer. It heals all parts of the body, the mind and the muscles and it provides the person with energy and livelihood. A person who doesn’t receive these advantages will grow unstable and unhealthy physically and mentally. 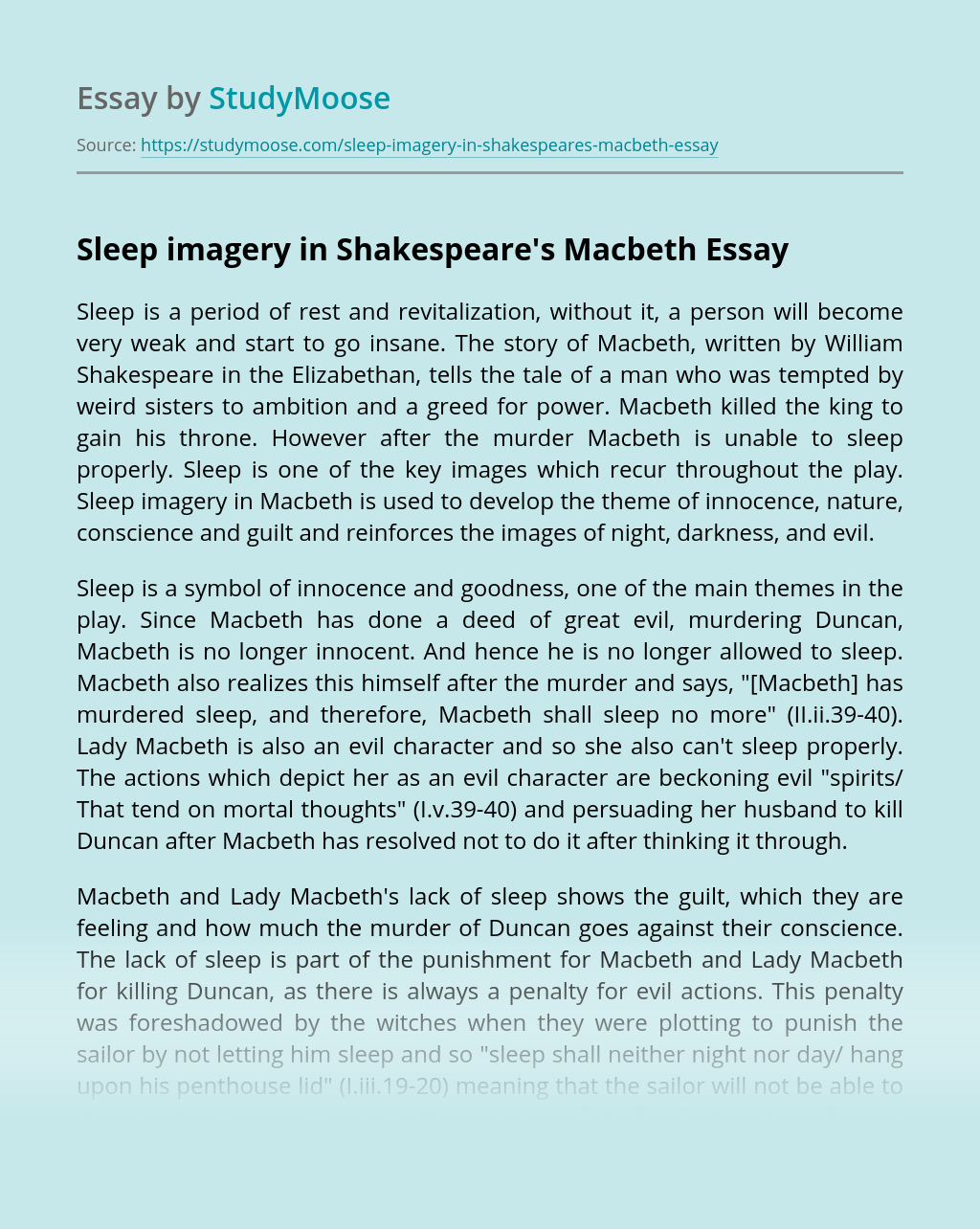 What use does Steinbeck make of animals and animal imagery in ‘Of Mice and Men’?

View sample
The Cast Away: the Analysis of Imagery in American Gothic Literature

Horror and romance are often the two compelling genres which receive the greatest response from entertainment lovers. Fans of both genres enjoy the overwhelming emotions experienced. The feelings of fear, excitement, oppression, humiliation, darkness, gloominess, and suspense fuel the psychological side of individuals. These feelings are not just found in movies and music but are...

Imagery, as defined by Webster’s Dictionary, is the use of vivid figurative language to represent objects, actions, or ideas. In Othello, Shakespeare makes use of colors to represent ideas or to set the mood for the scenes taking place. The use of such color imagery enhances the play, causing the reader to look past the...

In Wuthering Heights, Emily Bronte uses Language and imagery to create a very stark contrast between Heathcliff, and Edgar Linton. This contrast is not only illustrated in how these characters act, but also in their appearance, usual setting and the language that is used to describe them. Emily Bronte first uses the raw basics of...

View sample
Use of Imagery in Oliver Parker's Othello

The symbolism with the chess pieces is very relevant to the issues of the play. It is used to symbolize Iago’s control over the main characters. Othello, Desdemona and Cassio and represented by a black king, white queen and white knight respectively. When Iago has finished his soliloquy, he drops the pieces into water. This...