During the century and a half between the arrival of twenty blacks in Jamestown in 1619 and the beginning of the American Revolution in 1776, slavery—something that had never existed in England itself—spread throughout the English colonies, from Virginia it would make its way south into the Carolinas and then out to the frontier, and it would also make its way north into the midAtlantic states and into the farthest reaches of New England. It grew slowly, almost imperceptibly, until it had become so embedded into the American way of life and commerce that colonists eager for wealth imported hundreds of thousands of Africans to work in their fields.

Don't use plagiarized sources. Get your custom essay on
“ Slavery Essay Introduction ”
Get custom paper
NEW! smart matching with writer

During the eighteenth century, slavery became an entrenched and for many colonies, central component of society. But slaves were brought to America to work. First and foremost, it was a system of labor.

Colonial America was overwhelmingly agricultural. Many early English colonists had hoped to become fabulously wealth without having to work—much like the Spanish conquistadors who came a century before them, they had great hopes of finding gold, or if not that, then perhaps they would discover the Northwest Passage to the Pacific Ocean, thereby gaining access to the riches of the East Indies.

It soon became quite clear that forget about wealth, survival itself was going to be a challenge, and was going to depend on working the land. The New World may not have held the abundant riches colonist dreamed of, but one thing was abundant: land. For the first generation of settlers, feeding themselves took up most of their energy, but in 1617, it was discovered that tobacco seeds, transported from the West Indies, thrived in the soil of the Chesapeake region.

(Incidentally, it was Pocahontas’ husband, John Rolfe who successfully planted the first tobacco crop.) Over the course of the seventeenth century, tobacco became a major commodity fad, and would rival tea and alcohol in popularity throughout the seventeenth and eighteenth centuries. Initial inflated prices for the tobacco would help fuel the development of Virginia. But first, the settlers faced a problem: they had a crop (tobacco), and there was plenty of land to grow it, but what was missing? Labor. Labor is THE problem of colonial America. Who does the labor? Conditions were so dismal in the colony that planters realized the only way they could get people to work for them would be to force them.

That may seem like a less than obvious choice. But these colonists came from a society in England that was highly stratified—the rich and powerful took it as their right to exploit the poor and powerless. In many ways, the early colonists came from a world that was pre-modern—without concepts of cruel and unusual punishment, equal rights, exploitation. In fact, it was a world that took inequality for granted. So there was nothing particularly problematic about the idea of forced labor. And the colonists didn’t particularly care what this forced labor looked like. They needed labor, period. Some seventeenth century colonists were willing to pay freely hired workers, but they also experimented with two sources of unfree labor: Indians and Europeans, before it occurred to them to import Africans on a widespread scale. 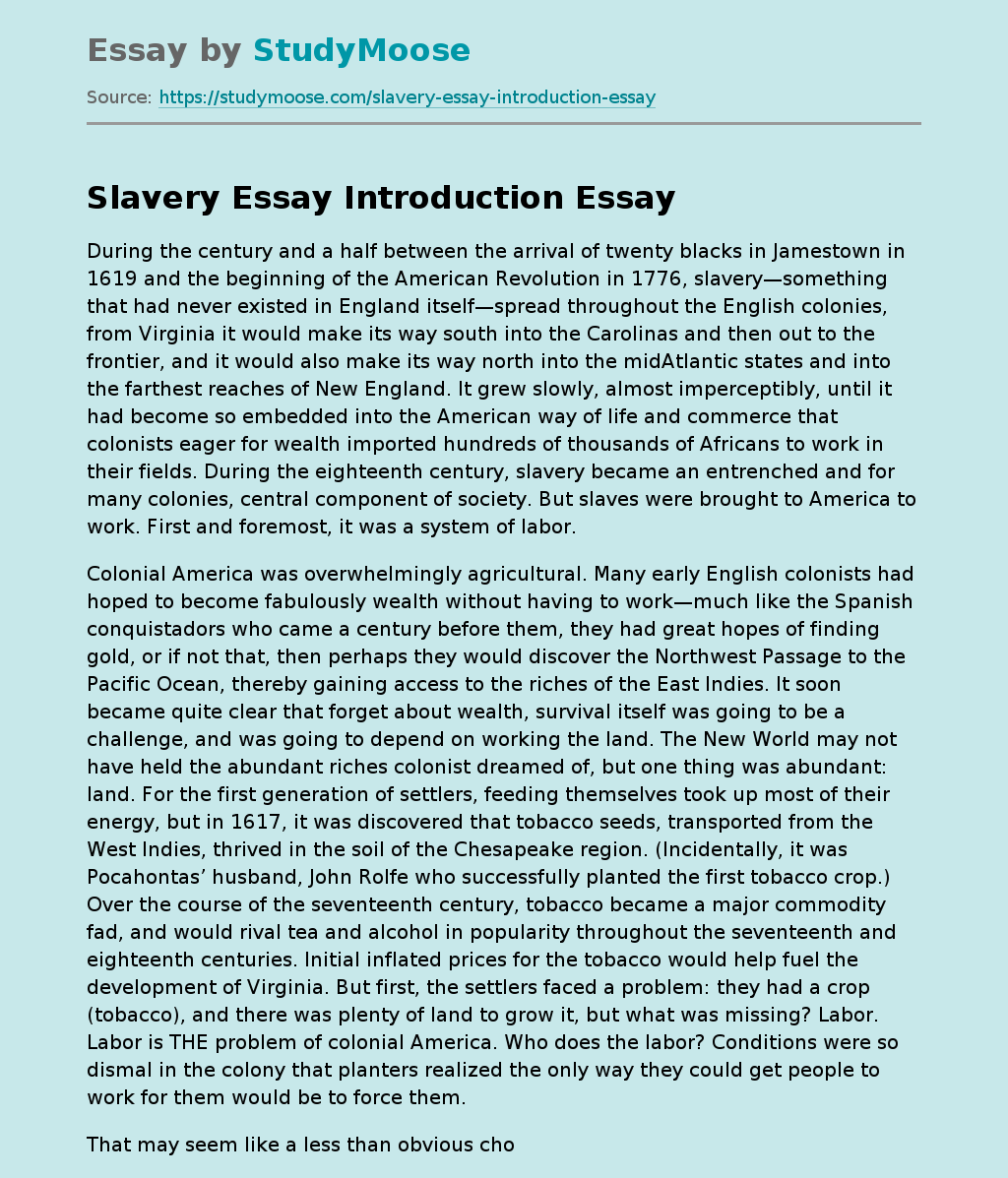