The Nat Turner rebellion caused a great uproar in Virginia. The aftermath of the movement actually moved some in Virginia to push the ideas of gradual emancipation. With the intensity of the slavery issue at the time, this rebellion had the effect of causing a chain reaction in the Virginian society. The initial reaction of the white population after the rebellion is rather complicated. One thing to note is the power of rumors and their destructive influence. People in Virginia started going crazy, as these rumors incited mass hysteria.

Don't use plagiarized sources. Get your custom essay on
“ Slavery And Freedom of Nat Turner Rebellion ”
Get custom paper
NEW! smart matching with writer

Whites in Virginia mobilized towards Southampton county, numbering roughly three thousand units. With an overall sense of panic, and increasingly terrorizing rumors, it is no wonder that there were so many atrocities done to the black population. Militia came into the area with preconceived ideas as to the extent of the rebellion, and with it they just started killing random blacks. In a hypocritical way, whites mutilated the bodies of their victims.

Whites decapitated approximately fifteen supposed rebels in Murfreesboro with the heads placed on poles for everyone to see. What could cause people to see this as a good idea? It is fascinating that the incoming militia had the capacity to mirror the crimes that they were there to prevent. In the very area in which Nat Turner’s rebels murdered the Vaughn family, the head of a murdered black man was put on display. This reaction shows the deep hatred that some white men had for slaves. This aimless killing obviously could not continue for long, as peoples started to realize that their property was being destroyed.

Monetary compensation was only given if a slave was executed under the law. Since slavers were a key economic asset, it was only appropriate that the suspected rebels should be tried in a court.

With the death sentence being issued by a judge, the slave owner could be compensated, and the blood lust could be sated. Shifting toward a more appropriate action, the death sentence was typically more humane that the random murders seen initially. Reaction on the side of the law was obviously very hostile, since every judge was white and very much emotionally compromised on the situation. With the racial opinions and dehumanization of blacks, this court wouldn’t be the fairest, but it was better than previous actions taken on the black community. The judges expedited the hearings of suspected rebels, allowing little time for them to build a proper defense. As there was a great deal of prejudice towards them before the Nat Turner rebellion, black men faced a considerable amount of abhorrence in the aftermath of the revolt. Not only did the free blacks feel so much pressure that many of them fled the area, but some even chose to go assist in the colonization of Liberia. One important thing to note is that Virginia even took away the right of blacks, slave and free, to preach or conduct religious meetings.

This is interesting with the knowledge that this country was founded upon religious freedom. In the mind of slave holders, slavery needed tighter controls. Pent up emotions concerning the abolition movements likely caused some of the more extreme reactions to the Nat Turner rebellion. The fear of losing their property and way of life was a battle that the South had been fighting since the country was founded. Their livelihood depended on the protection of slavery. Publications like David Walker’s Appeal to the Colored Citizens of the World, likely caused quite a stir in the Southern population. In the mind of Governor Floyd, these abolitionists and black preachers were the main culprits behind the Nat Turner rebellion. In reading the document encompassing Nat Turner’s confession, there are some problems when analyzing the text. What has been left out is unknown.

In a joint effort between Thomas Gray and Nat Turner, the confession was made to give at least some account of the rebellion. Both men likely hated each other, which would cause some communication issues during the interview. While Turner was the voice behind the confession, Gray was ultimately the one that structured it. Most of the article is the synopsis of events that occurred in Turner’s life, which appear to be his own voice. Throughout the document, Gray interjects his opinions, especially in denouncing Turner’s acts of violence. When Turner addresses his supposed ministry, Gray seems to be fill with loathing concerning Turner. Though he recognizes the vast intellect of Turner, Gray also describes Turner in a manner that shows an overall disposition of enmity. 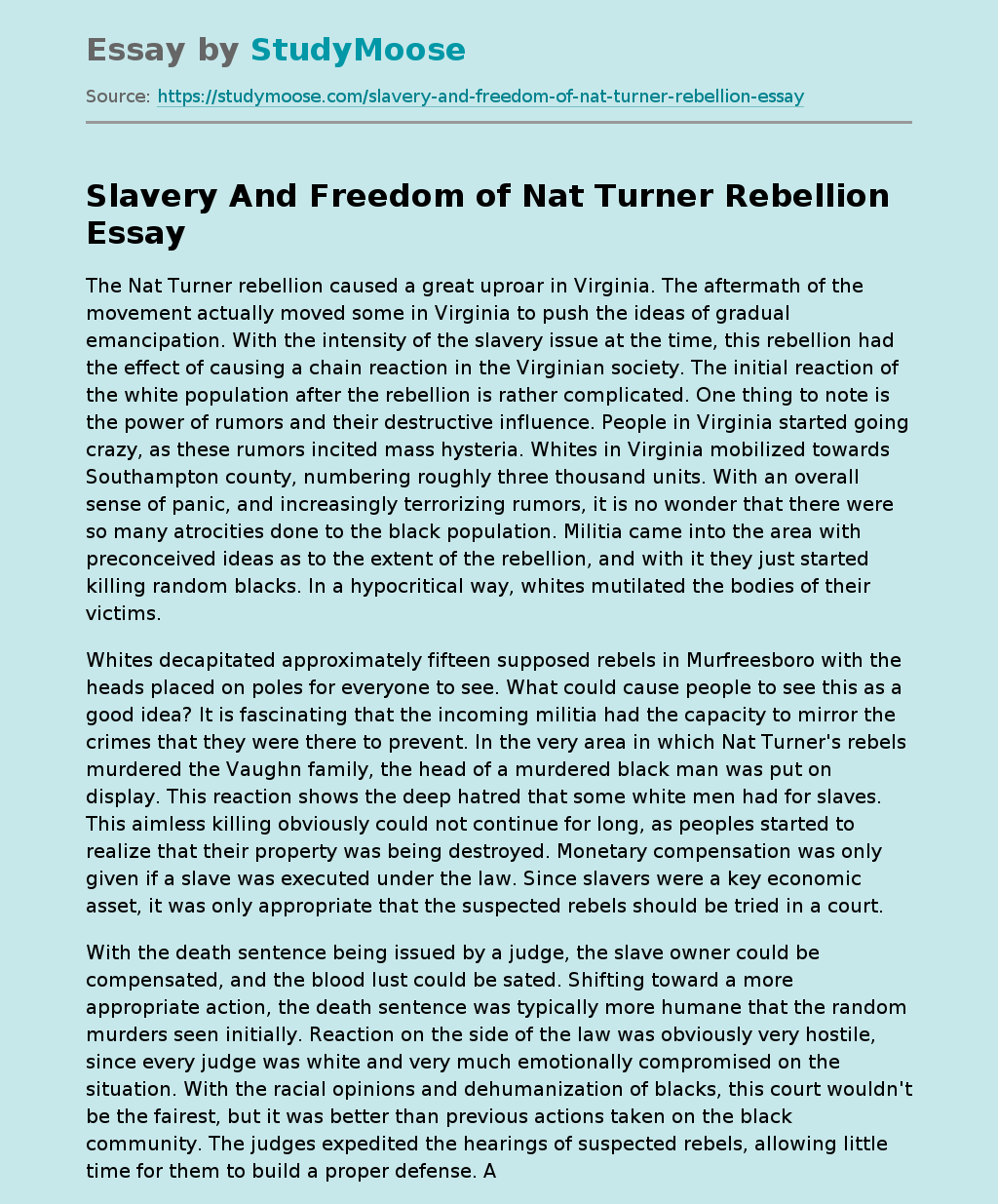