Skungpoomery features two characters, a mother and her son. The mother is very much a dominant woman who still enjoys fussing over and bossing about her rather useless, weak son. We did an exercise where we visualised what the characters would look like in our heads. Both the mother and the son reminded me of a famous duo, Laurel and Hardy. Mrs Wibble being Oliver Hardy, the domineering one and PC Nicholas Wibble being Stan Laurel, the simple one. Like Hardy treats Laurel, Mrs Wibble treats her son in a condescending way,  much to the chagrin of PC Nicholas who would much rather be treated like an adult, and not have his mother still nagging at him.

Don't use plagiarized sources. Get your custom essay on
“ Skungpoomery by Ken Campbell ”
Get custom paper
NEW! smart matching with writer

I can picture Mrs Wibble being quite a large character who would be wearing some sort of floral dress with bright red lipstick. I can imagine her voice being loud and perhaps quite high pitched and can see her walking around the stage with a good posture and large strides.

PC Nicholas Wibble, I can picture being tall and lanky with a short bowl haircut, which of course his mother would have made him get, and can see him slouching across the stage, with a decidedly nervous disposition.

I would imagine his voice would be rather quiet and perhaps slightly squeaky, as if it had not quite broken yet. I found that doing this exercise, helped improve my performance on stage as it meant I was able to act out the characters easier now that I had a clear image of what they looked like and how they acted in my head.

PC Nicholas Wibble is still very child like, probably because he still lives at home and Mrs Wibble still treats him like a child rather than the adult that he is. Although PC Wibble may try to stand up to his mother, she will tell him otherwise and he backs down easily, here is an example of this:

MRS WIBBLE- Take them off and let me give them a quick press.

WIBBLE- O no, Mum-look I’m going to be ever so late now.

MRS WIBBLE-Take them off, Nicholas, it won’t take a moment.

Doing this exercise made it easier for me to do the butter and trouser scene in the play. This is where the phone is ringing and Mrs Wibble accidentally picks up the iron and puts it to her ear, rather than the phone, and then gets Nicholas to get her some butter to soothe it, and burns his trousers. To make this part of the performance more comical, we had to look at how the characters would move in a panicked way. For example, we thought that we could have Nicholas running about the stage in circles in a confused way, hands on his head, looking about, and thinking what to do while mumbling to himself. We could then have Mrs Wibble shouting at him to get the butter, while sobbing and moaning about her ear loudly, as it would make it more comical for the audience.

To make sure that we had enough space on stage for all that was going on, we had to plan out the set and make sure we knew where everything was going to be so that we could determine exactly what the characters had to do and where. Learning and using all of these different techniques was useful when developing our final piece as it meant that we could piece together things that we’d used from this practice piece, as well as our own new ideas, to get a good performance. We were now able to visualise exactly what our character would look and act like as well as the way they would move on stage, so that we could get a better understanding of our character and act them out in a suitable way. 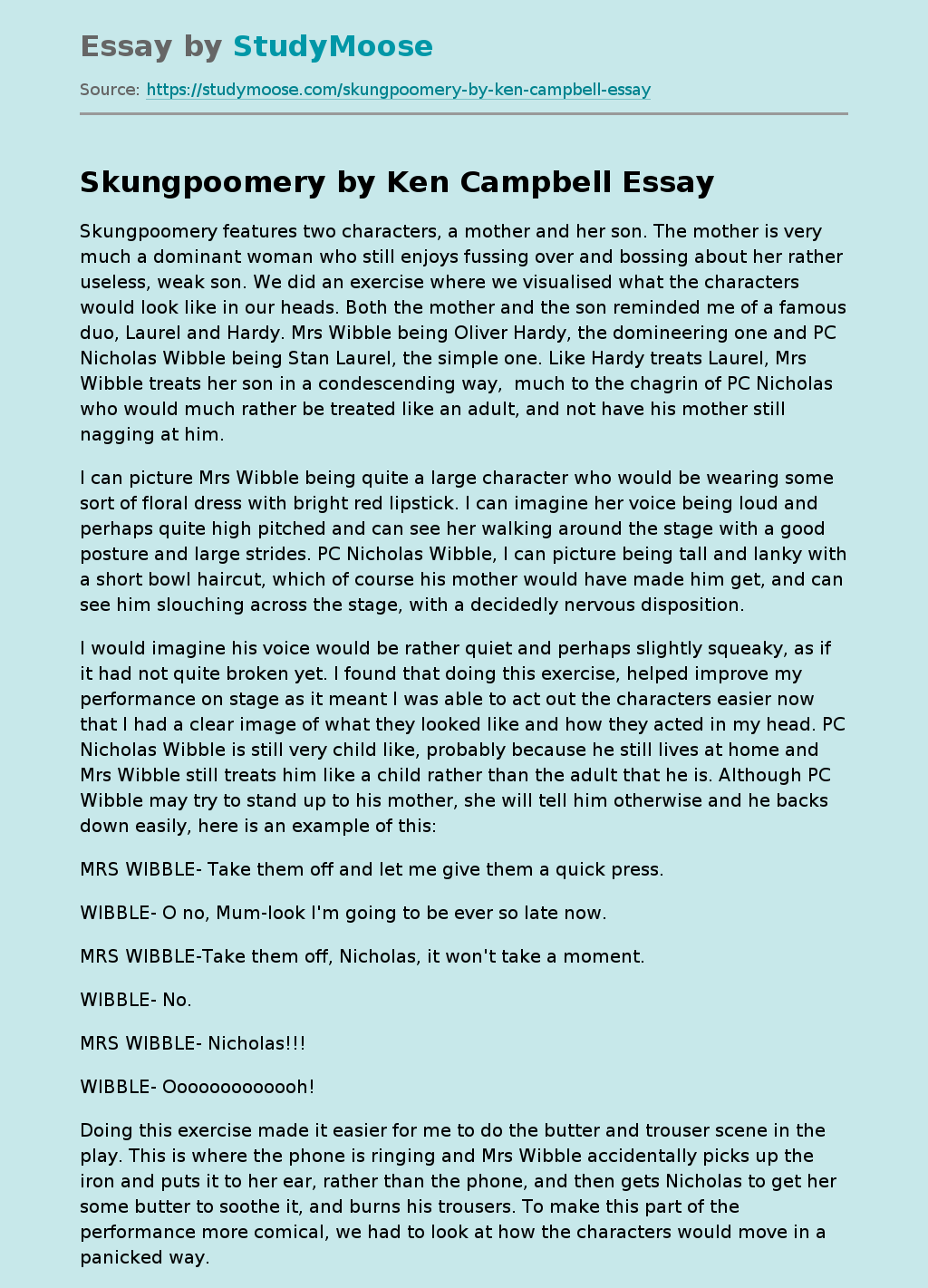