Skin Bleaching is defined as a practice of using chemical substances in attempt to lighten skin tone or provide an even skin complexion by lessening the concentration of melanin. There are several methods in which this can be achieved from the use of topical creams and gel, chemical peels and even skin whitening pills known as Glutathione. This practice is dated as far back as the 1200s rooted in Asia and Japan which is called the Asian Whitening and the Renaissance period between (1400s-1600s), all these people where already of Mongolian and European descent but where still obsesses in getting their skin as pale as white as possible.

On the other hand the epidemic among people of darker skin and black people who are dying to be white has said to be rooted to Colonial mentality. Regions such as Africa, the Caribbean and even the United States all having great number of people with the great demand to achieve lighter skin and with this preference somehow equals the ideal vision of beauty.

Despite the Enforcement and banning of several bleaching products and its known and its known health hazards it is a growing market for China and several other countries. This issue is can be theoretically broken down by the symbolic integrationist approach which will interpret the importance of self – image. Skin bleaching overall is a dangerous and is killing society’s perception of beauty and commercials and media help make this stereotype that skin color plays a role in economic status and chance of success.

First, Skin Bleaching also known as Skin Whitening was said to have its early roots in the Renaissance period of (1400s-1600s). The women were obsessed about getting their skin as pale and as white as possible, “In those times, only very rich, white women pursued porcelain skin” (Hessa, 2011). The vision of the ideal beauty combination was a white face with reddened lips and cheeks, this can be seen through many painting of a woman during the Renaissance period.

The most popular skin whitening creams used among the renaissance women was the Venetian Ceruse which was a white lead powder that gave an artificially white complexion to the user. One of the most popular Renaissance women who practiced Skin Whitening with this product was Queen Elizabeth I. Ceruse was easily absorbed through the skin, leading to lead poisoning. The product caused hair loss, a deteriorating mental condition and muscle paralysis and several other health hazards. “Queen Elizabeth I suffered from the effects of lead and mercury poisoning, which eventually lead to her death. In this painting, her hair loss was evident. She had a high receding hairline, covered by a wig” (Hessa, 2011). Skin whitening also has a long history in Asia, stemming back to ancient China and Japan as early as the 1200s.

“In Hong Kong two thirds of men prefer fairer skin, while half the local women wanted their men paler. Almost half of Asians aged 25 to 34 years used skin whiteners in a business that some analysts have said could be worth billions of dollars” (Bray, 2002). This obsession of skin bleaching has become an epidemic for ethnic groups with darker skin and has become a social and psychological in some cultures such as Africans, African Americans & the West Indians (Jamaicans, Haitians, and many more). This is epidemic and how black people often show a personal preference for fair skin I think is rooted to the colonial mentality. Reason being, I think it is the result of an internalized oppression.

This oppression was driven by perceptions of ethnic and cultural inferiority created from centuries of colonial rule. Whitening products perpetuate an old colonial mentality, even their advertisement and public appeal have gone so far as to be offensive and discriminatory. More so, the effects of Skin Beaching is alarming and deadly both mentally and physically. Skin Bleaching products work by stripping way the skin’s natural pigmentation and skin cells. Unfortunately, some of these consumers will endanger their own health in order to achieve a more desired skin tone. In fact, in some locations, skin bleaching is almost considered an epidemic problem due to the fact that potentially unsafe ingredients such as Hydroquinone are being used excessively and for extended durations of time. This is resulting in a variety of health problems such as kidney problems, skin cancer, asthma, leukemia, poisoning and many more. “Hydroquinone is a very powerful chemical that it used as the key ingredient in the photographic process of development, but is also used in the rubber industry as an antioxidant, and as an agent in hair dyes.

Mercury is another product often used in some cosmetic products as a bleaching agent. Severely toxic, it can cause skin to go grey or blue black, rather than lighter, and in many cases has resulted in the user suffering from mercury poisoning” (Olade & McGuire, 2008). The medical and pharmaceutical industry has warned that the high level of steroids presented in these illegal imported products threatens not only their physical but mental and cultural well-being. But the question still remains, why do people go to this extent to change their skin color? It is because society presents the illusion that bleaching is a gateway to upward social mobility. And black skin is associated with social disadvantage and brown skin or lighter skin is believe to be more beautiful and a pathway to wealth.

This sometimes is unfortunately true has black people are often prejudice against their own kind and critical of when someone has more melanin in the skin or darker. Examples of significant influential people that have practiced skin Bleaching in extremities are American singer “Michael Jackson and Jamaican Dancehall artiste “Vybz Kartel”. Both artistes share a common story because both have had a drastic color change from black to white. Regardless of their choices and their excuses these are both people who perpetrate self-hate and think the color prejudice of society will offer them more success since their image is now lighter and maybe generate more sales.

According to Dr. Shirley Ann Tate, senior lecturer in social policy and sociology at the University of Leeds is not surprised by Kartel’s new image, nor the business venture that goes with it. “There is a very long history of skin bleaching and lightening in Jamaica and I don’t see it as something which is removed from black masculinity,” (Bakare, 2011). The artiste released a line of bleaching product and did a song of his product called “Cake Soap”.

In addition, Skin Bleaching is done extensively because of the self- image and can be analyzed based on the symbol interactionism approach. When black people accept the false belief that blacks are inferior to white, they are buying into the concept that has kept blacks as the labor class. This explains black people extra ordinary level of identity trauma and show such prejudice in schools, work place and seen through media globally. Symbol interactionism approach explains how one views then self for example the looking –glass self. The term “Looking- glass self is to describe the process in which individuals use others like mirrors and base their conceptions of themselves on what is reflected back to them during social interaction” ( Cooley,1902, p.86).

People that bleach the skin sometimes suffer from self –hate and this can go has far has if you don’t love yourself how can love others. If you raise you consciousness in order to change these false perceptions then society would reduce such prejudice and need to fit a certain image. The importance of self-image is very significant to one’s human development, failure to properly matriculate and gain understanding of yourself can lead to several psychological disorders and physical obsession like changing your image constantly. Black people from all parts of the world today and even parts of Europe, Asia have serious problems with their identity and these areas have high sales of bleaching products. Low self-esteem can also lead to altering your skin color. The misconception that lighter skin equals beauty is believed because society unfortunately does feed into this by exercising favoritism and color prejudice in work places, huge organization, and the media.

In conclusion, Skin Bleaching also called Skin Whitening is a dangerous and growing epidemic that is destroying the perception of beauty for our future generations. The production of the most commonly used bleaching agent, hydroquinone (chemical formula C6H6O2) is believed to come accident, after Black workers in a rubber plant found that when a certain chemical came into contact with their skin it caused light patches of skin. These products are illegal but are accessible and sold from distributers of Chinese products and beauty supplies.

These creams and products have steroids that cause serious hyper pigmentations, skin burning, take away the skin cells causing skin cancer, and lung and breathing disorders like asthma. Removing the melanin of the skin artificially causes the skin susceptible to harmful rays and causes serious health hazards. Regardless of these results this is a growing epidemic today among darker people and ethnic groups such as Africans, Indians, Jamaicans, Haitians. The habitual use of these harmful products is because if society’s display of beauty and the media portray lighter people has successful people. Skin color present better opportunities the victims claims, in Third World Countries bleaching is a growing trend because they say they get ahead and the poverty level and prejudice presented in these countries are a big factor in the epidemic.

But, until people overcome the domination of symbolic interactionism and develop a strong social self this epidemic will not be reduced. Beauty is with and not skin deep. These products should be banned because the level of mercury that is in the ingredients. The FDA and the Medical and Pharmaceutical industry should make a greater alarm about its detrimental effects on these people that use it the most that are even too illiterate to really understand the long term effects.

Is skin bleaching in danger of becoming a trend among men? | Fashion | guardian.co.uk. (2011, September 7). Latest US and world news, sport 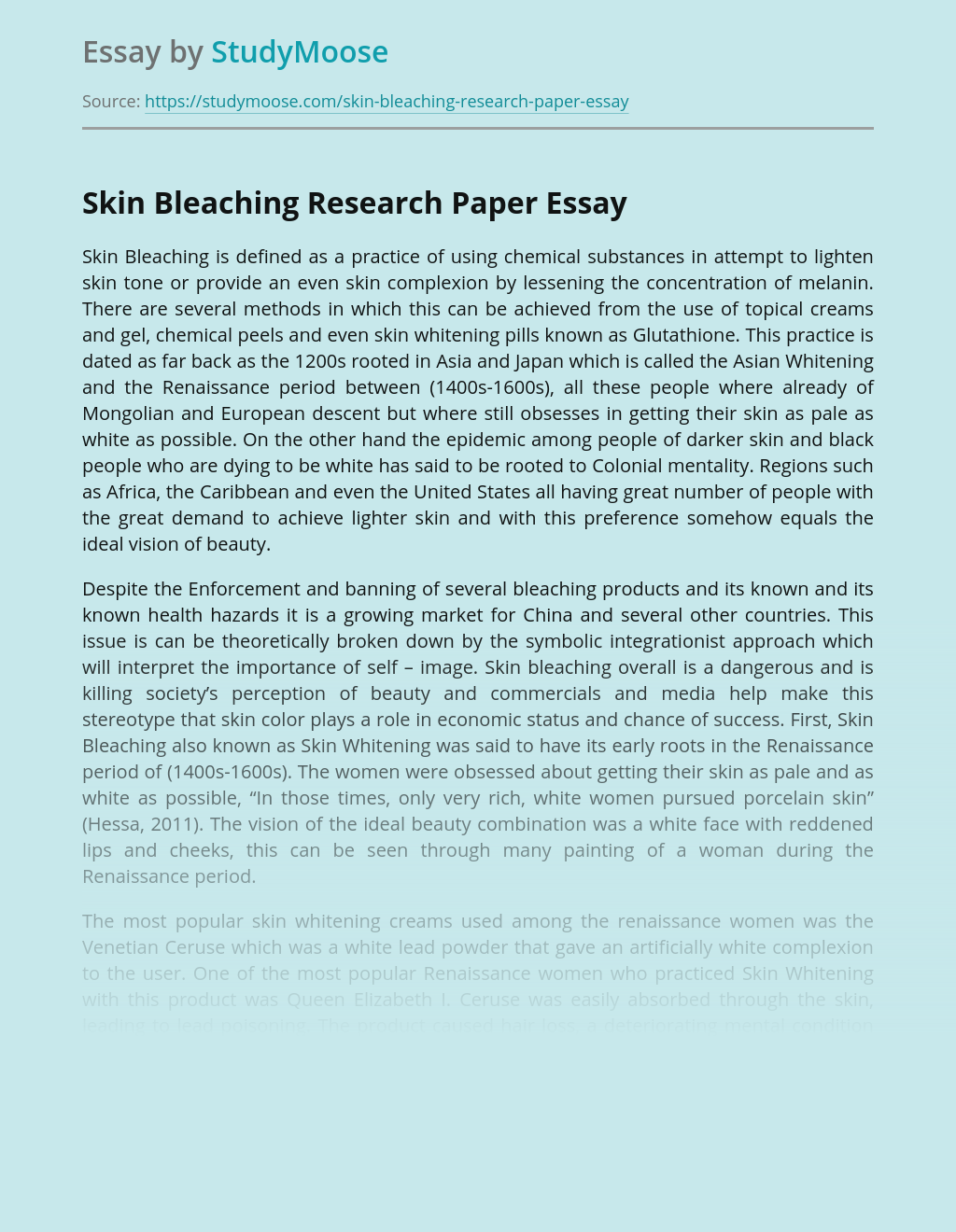