The two-point discrimination test of the skin is a simple test of the sensory nerve function. Two-point discrimination measures the individual’s capability to distinguish two points of stimuli presented at the same time. The importance of this study is the ability to tell of two points verses than one that pressing on the skin depends on two things: the concentration of the sensory receptors and the connections that the sensory nerve cells make in the brain.

An esthesiometer or caliper; compass-type instrument was used to determine limits of two-point discrimination sensitivity in several skin areas on the subject’s forearm, thumb and index finger.

The activities involve the touch sense of the skin, which allows us to distinguish different kinds of stimuli upon the surface of the body. By using our touch sense, we discover superficial, deep pressure and sensations we describe as brushing, vibration, flutter, and indentation. For the forearm, it ranged from 12 mm to 35 mm. The thumb, demonstrated discrimination values of 3 mm to 10 mm while the index showed values of 1 mm to 8 mm.

The skin is sensitive to temperature and pain, in which we sense with different sets of receptors. These skin senses, along with muscle/joint position awareness or proprioception, make up the somatic senses. The subjects were both men and women aged 18-55. The minimal distance at which two points could be discriminated was measured on a line on the base the forearm, thumb and index finger of the right hand.

An age-related decline in the ability to discriminate two points was obvious, but there were no significant differences in ability between men and women. The most observation was the different variation in two-point discrimination sensitivity. The results for the individual variation for both men and women suggested that caution should be used when one is interpreting the results of two-point discrimination testing on certain people.

The procedure of the project is to determine the ability to differentiate the touch of the calipers or an esthesiometer and a metric ruler. The project is to determine the two-point threshold which is the measurement, the smallest distance at which two points of contact can be felt. If we can feel the sensation of both picks from a short distance to a wider distance. To know when we can feel both and without looking. Turning away and getting poked when to say when you feel one touch or two touches. The areas that we did to do the test was the forearm which has thin skin, thumb and the index which has thick skin.

The ability to distinguish the two points from one area to another area of your body. The ability to determine which portion of the skin has been touched is called tactile localization. The receptors must be densely packed in a sensitive area, so that two points very close together activate different receptors. The data shows that there are certain areas that are sensitive or not so highly sensitive at all. Just depending on the testing area you could feel both or one touch of the calipers. To determine how many touches and the distance of the time of the lab.

The issues that the lab was not described well. The results are skewed do to incorrect instructions that were given. Some of others colleagues had different results and maybe also had to do to the color off our skin. Directions should be given well and should be shown how to do it correctly. Just knowing how to do it right. Methods and Materials

Twenty-four men and women, ages from 18-55 were included in this study. Pressure threshold and two-point discrimination were assessed on the forearm, thumb and index finger in both the groups using a caliper. Subjects had to have their eyes closed or look away while being tested.

Results
Based on the graph and table we can determine that the thumb and index finger have thick skin and the forearm has thin skin. The results show us the thicker skin is more sensitive than the thin skin; this is because the thick skin has five layers and the thin skin has 4 layers. Thick skin is as thick as a standard paper towel or 0.5 mm. Thin skin is the equivalent of a sandwich bag or 0.08 mm. 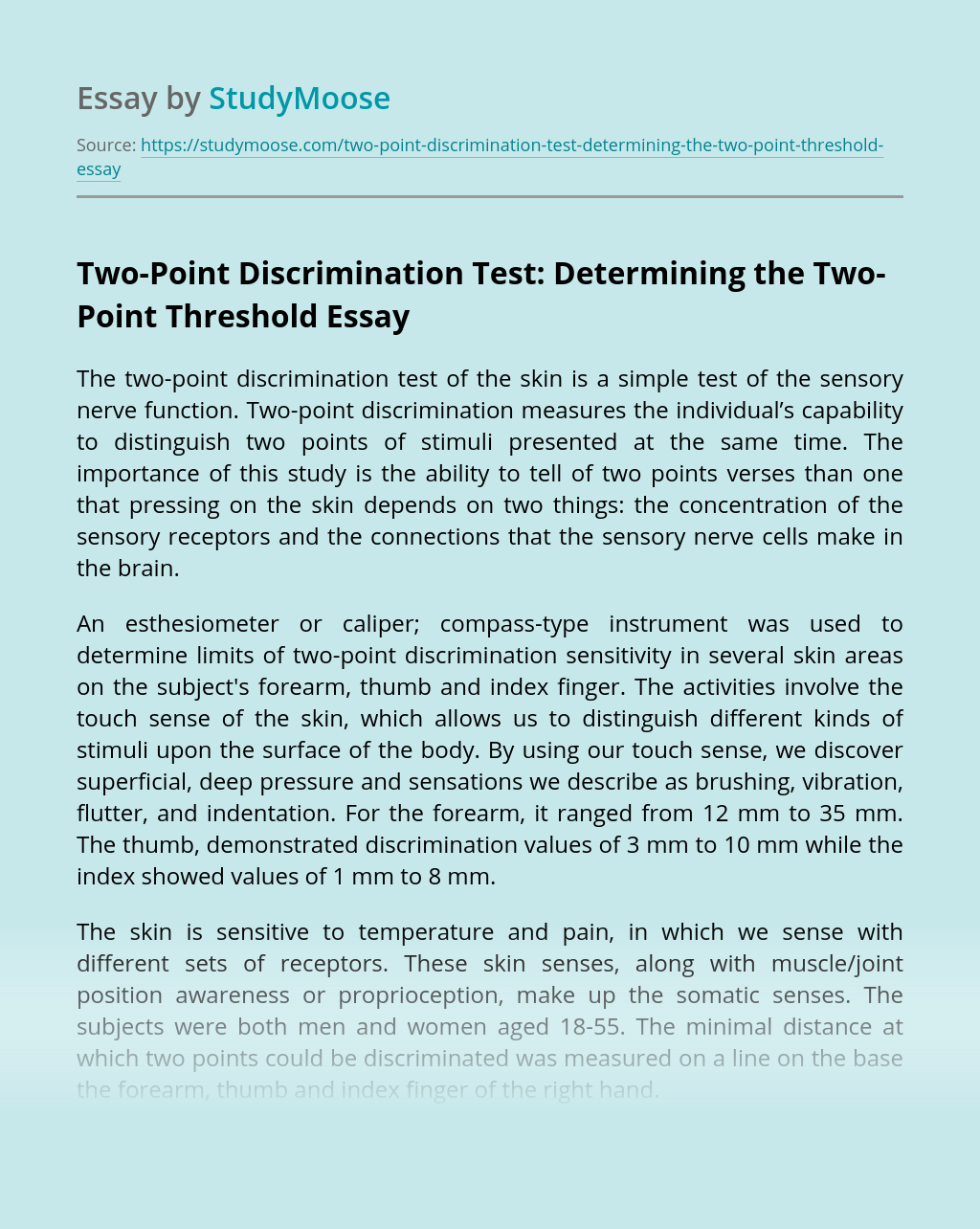