Live is a continuous process of making decisions and setting up goals for the future. Some people will prefer living it alone, and enjoying the single life, but others may prefer living it with a partner, and enjoy married life. Everyone in this world faces a problem at some point in life, either single or married. Both single and married lives have many points in supporting it when talking about it. In the old times, most of the people use to get married while others are planning to get married, but in today’s world some people prefer to stay alone, either than to get married.

Don't use plagiarized sources. Get your custom essay on
“ Single life vs married life ”
Get custom paper
NEW! smart matching with writer

This has actually changed the lives of many people and their lifestyles. Majority of the world’s population wants to get married in the future and create a family. However they want to enjoy the life of parenthood to its fullest meaning; although, it’s not easy to create a family. Nevertheless, most people also want to live the single life, with the knowledge of not creating family, avoiding many responsibilities to perform and also avoiding low cost of living.

Single people also tend to hold high positions in the work place, due to the free time they have.

Living a single life differs from living a married life. The first difference in single life and married life is, freedom. Freedom is the state that one has the power to act, think of what he/ she wants without being restrained and also speaks for him/herself.

In married life, one person’s freedom is an important factor to consider when one decides to marry at some point in life. During marriage, people sacrifice most of their personal freedom in order to sustain a good and stable relationship. If the man or woman wants to go out by him/herself in most cultures, they need to seek permission from partner just to prevent any misunderstanding. Also during decisions making, married people have to consult each other before they come up with the final and agreed decision or idea. They sometimes have to escort each other to some places which they are not comfortable with.

In contrast, freedom was also a factor to consider in single life because most people in different cultures were being controlled by their parents, but in this modern world, personal freedom is not all that an important factor to consider. Because during the single life, people don’t have to mostly sacrifice their time for anything if not for work, school or family meetings. They can also go out with anybody they want and also go anywhere they want to go. Moreover, they can take decisions at any time but, mostly they get some advice from parents and friends. They also don’t have to travel with anybody, if they choose not. However, they have all the time they want, so they can register for classes at a time that suite them best. Responsibility is also another difference between married life and single life. Responsibility is the stage of having many task or duties to perform.

In married life, the woman or man has to work and get money to take care of the house. In some cultures, the man has control over the woman, but in the old time cultures the responsibility of the man was mostly to work and provide food and clothing for the house. However, in today’s world it depends on them to decide for themselves either one person should work or both. Married couples find it difficult to save money. Usually most of them start saving at early stage, so they find somewhat easy when paying for the children’s tuition. They also tend to have other responsibilities at home to do. Whereas in single life, they also have some responsibility to do. Most of them have to take care of their house, school, and parent’s home. Some of them even support their parent’s financially. Others have to help friends in many other ways.

They also have to work and get money in other to buy gas for theirs if they he/she has one, pay for tuition, buy clothes, and foods. Most of them sometimes have to drive their parents or cousins to other places if necessary. Thirdly; companionship. It is the feeling of friendship or followership. This in the married life is where husband rely on his wife for support and wife also relies on husband for support. They achieve support from the partner, parents and their children. Meanwhile single people rely on parents or friends for support. They mostly find it hard in trusting anyone to share their secrets and other important stories of their life with. 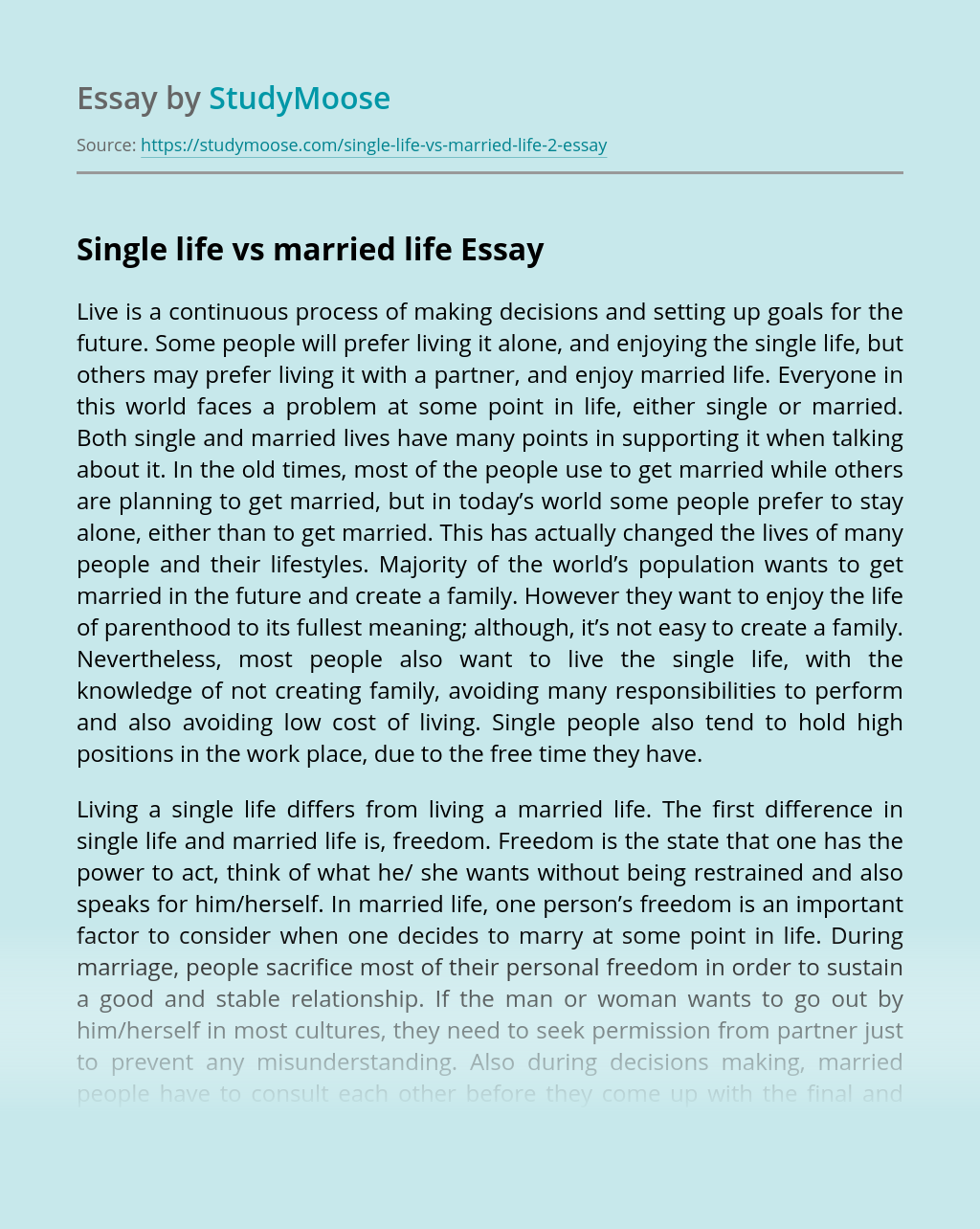