Since time and memorial from early beginnings of humanity the

Since time and memorial, from early beginnings of humanity the process of civilization and a system of informal networks have largely defined lifestyles and the flourishing or progress of human cultures occurring at various places and different times throughout the world.

During the earlier stages of human civilization, work was subjugated to simple tasks involving the most basic human needs: food, child care and shelter. Labor was likely to be specialized or the first occurrences of division of labor happened only when some individuals exceled in certain tasks most common to the prehistoric times such as hunting or forms of farming within agriculture in order to gather means for food.

Don't use plagiarized sources. Get your custom essay on
“ Since time and memorial from early beginnings of humanity the ”
Get custom paper
NEW! smart matching with writer

Although these forms of labor existed, it was not standardized over wide regions geographically since people were often isolated, unevenly distributed and population density was inconsistent with varying regions of the world. Due to the lack of certainty in the availability of food and other basic resources, negligible scope for surplus of equal exchange and valuation may have caused different groups to function in a detached manner with others in society, although it was a sufficient and prevalent lifestyle for many years.

Prior to the advent of industrial capitalism, which arose over two centuries ago primarily in the United Kingdom, work generally referred to ‘activities directed at satisfying the human need for survival for the vast majority at a subsistence level.’ In terms of the history of modern human civilization known to have initiated approximately 40,000 years ago, it is only in the recent past that work has become synonymous with regular paid employment, a separate sector of specialized economic activity for which an individual receives payments and monetary benefits.

Therefore, the present notion of work is a modern social construction, the result of particular historical conditions which are usually denoted by the term ‘industrial capitalism’. The former part of this term implies that work is a productive activity which consists of using machines or technology powered by energy sources applied at a specific place, usually an office or factory in a building, away from one’s residence. The last part suggests that work is associated with monetary payment, usually at a formerly agreed rate in relation to time or output and is part of a market system by which productive property is privately owned with a perspective to build profit through the allocation of pricing, including factors like labor amongst others altogether. The term ‘modern society’ refers to abroad range of developments, among which a key area is industrial society and all the organizational changes that have happened over the last century.

Amongst the most significant era for the timeline and development of work was the Industrial Revolution occurring in the UK during the latter phase of the 18th century. In the more modern and technical sense, the concept called ’employment’ was initiated whereby systematic utilization of labor was implemented for the benefit of both employers and employees (Giddens, 1971).

According to Duhaiem’s Law, the legal definition of employment is ‘a contract by which one person agrees to perform a job, service or task for another, with or without remuneration although, as with all contracts at common law, some form of consideration must flow’

Moreover, the most congruent approach to employability and economic activity, Capitalism refers to a profit-oriented system based on the private ownership of production, on an individual, family or corporate basis, that operates in a competitive market system in which the owners of capital employ free wage labor on a monetary basis.

Understandably, within the context of industrial relations, organizational behavior and psychology as well as economic disciplineswhich are chiefly related to the topic of this study, a fundamental concept is that defined by what is assigned to a worker or employee in any firm or organization. A Job simply refers to the sum total of an individual’s assignment in the workplace, usually for a certain form of remuneration, classically for pay (Pareek, U., 2004).

Another key factor with jobs is what it essentially consists of-tasks refer to the various activities that need to be performed in order to get the job done. Considering the nature of tasks, the execution of it by several individuals as well as the nature of interdependence and inter-relatedness, group activities as such have implication for organizational effectiveness. As a result, jobs and tasks must be appropriately designed and managed.

Satisfaction is the act of fulfilling a need, desire, appetite, or the feeling gained from such fulfillment. Itessentially indicates that a need has been met atleast at an optimum level. For instance, a decent meal provides satisfaction for one’s hunger, similarly when one achieves a life goal at a particular stage like graduating from a college or acquiring a suitable job it results in a feeling of satisfaction. Even when an idea is well elaborated for your benefit, it leads to satisfactory understanding of a concept.

Addressing the central focus of this study, introductorily, there are several definitions and elaborations of the term ‘Job Satisfaction’ as all emulate a similar meaning or denotation that of employee levels of satisfaction in relation to jobs and duties. Understandably, as a concept it is crucial for every employee or worker to attain, who may have a job or responsibility, since it is intrinsically rewarding in nature, as suggestable in the term. It can be said that a great asset for many or possibly any organization is essentially a happy and satisfied employee who is in turn likely to be more productive and hard-working by the general understanding of organizational behavior as we will explore the same.

Job satisfaction can be defined as the measure of an employee’s contentment, self- motivation as well as satisfaction with their respective job. It often occurs when an employee experiences job stability, career growth and possibly a comfortable work-life balance meaning that they are satisfied with the job as work meets the expectations of the person altogether.

In addition, it is known to influence a person’s affective and cognitive assessment of their working conditions and job attributes (Weiss &Cropanzano, 1996)

There are many disciplines that have considered job satisfaction as an important facet in organizational literature with fields such as economics, psychology, business studies and management sciences since research has suggested that employee’s orientation towards jobs and satisfaction levels can influence market behavior, productivity, absenteeism as well as employee turnover and efforts making it an important factor and indicator of the economy and labor force as such.

Further still, job satisfaction is known to be a substantial measure for overall individual well-being in addition to being a decent predictor of workers decisions to remain in an organization (Serrano& Vieira, 2005).

In consideration of the importance of job satisfaction levels to employees, several characteristic features of jobs play a role as to what extent an employee may feel fulfilled whilst employed. Primarily, the measure or amount of autonomy an employee has is noted to contribute to satisfaction levels. Gaining autonomyin a job refers to the extent to which the job provides an employee freedom and discretion to schedule work and make decisions or even draft procedures to get a job completed with less interference from others. It is essentially the locus of control an employee feels, therefore with a greater degree of autonomy, the more likely a person doing the job feels in control.

Another factor acclaimed is the scope of Feedback from the job since it indicates the extent to which an employee working on the job can assess whether they are performing appropriately or have space to improve in their give job. The process possibly advocates that the job in itself is stimulating and likeable.

Likewise, theJob Design accounts for certain sub features designed in a job that can range from quite simple to highly complex tasks in terms of the use of the employee’s skill. Some of the job design options are as follows:

· Job Simplification occurs when jobs are broken down into very small parts as formerly an active process in the assembly line operations, where a fragmented task is repeatedly done over and over again by the same person.

· Job Rotation consists of moving employees among different tasks over a period of time. Management does not have to bother with combining tasks, although simultaneously, workers do not get bored with doing one simple task over several years. The employee is periodically rotated from one job to another within the work setting.

· Job Enlargement involves simply adding more tasks to rather than doing just combined and the individual does the combined tasks altogether.

Since time and memorial from early beginnings of humanity the. (2019, Dec 13). Retrieved from https://studymoose.com/since-time-and-memorial-from-early-beginnings-of-humanity-the-example-essay 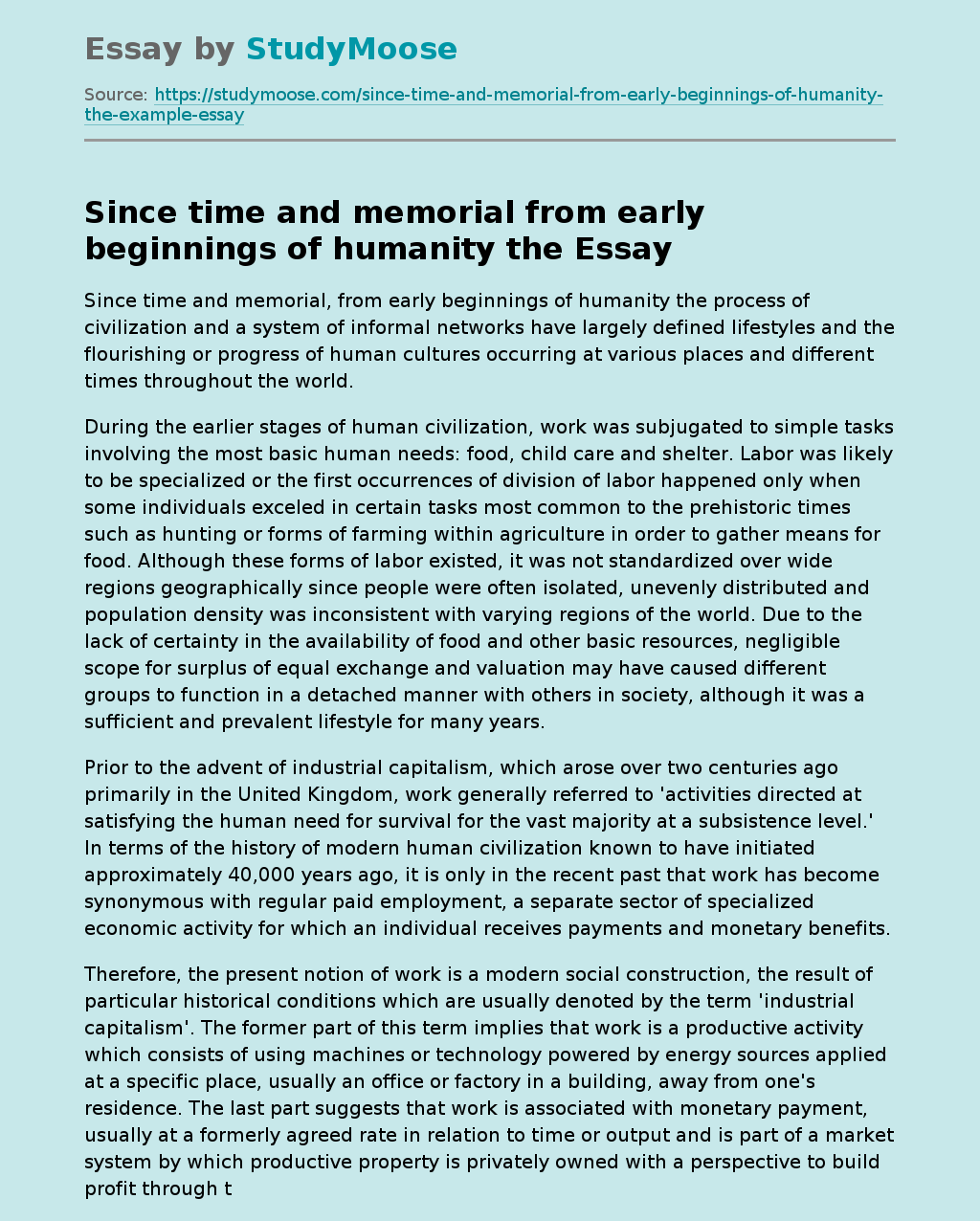