“In 1965 seventeen year old Fred Deluca borrowed $1,000 from a friend Pete Buck and suggested an idea of starting Pete’s Super Submarines in Bridgeport, Connecticut. This franchise was started to help get through college to study medicine, and in the following year they formed Doctor’s Associates Inc. to oversee operations of the restaurants as that franchise expanded. The first Subway franchised unit opened in Wallingford, Connecticut.” (Subway.com/Subwayroot/)

Fred Deluca and Pete Buck advertised on the radio the name Pete’s Subway to they eventually decided upon the name to Subway in 1968 as we know it today.

Don't use plagiarized sources. Get your custom essay on
“ How Subway Restaurant Can Avoid Marketing Myopia? ”
Get custom paper
NEW! smart matching with writer

The first mistake they made was putting the restaurant in a poor location. Their first year of business was a learning experience and a challenge. A year later they opened their second store after realizing that visibility and marketing were some of the key factors to success. Needless to say Subway restaurants have come to be very successful franchises.

In 2012, Subway honored CHEMCO with the Social Responsibility Award.

CHEMO provides hand soap and a variety of other cleaning and sanitation supplies. “The SUBWAY Social Responsibility Award recognizes a supplier that has done the most to create sustainable practices while reducing costs and improving quality in the SUBWAY® system,” (Subway.com/Subwayroot/) Marketing Myopia is managements’ failure to recognize its view of business. (Boone&Kurtz, 2013)

Subway’s mission statement is “Be the #1 Quick Service Restaurant (QSR) franchise in the world, while delivering fresh, delicious sandwiches and an exceptional experience.” Some strategies to avoid marketing Myopia are: Dispose of their soda fountain machine, since sodas are linked to childhood obesity.

Subway could also hire employees whose English is more prominent. Incorporate a drive- thru. “Subway declares that one of their salads provides five servings of vegetables. While this is technically true, the vast majority of the servings are iceberg lettuce. Unfortunately, this is one of the least nutritious vegetables available. Salads have four grams of fiber.”

(About.com, 2013). If Subways mission is to be the #1 quick service restaurant (QSR) franchise, then no one should have to wait on food to be heated in the microwave. Subway promotes itself as a “healthy alternative to greasy fast food,” and this marketing approach has proven very successful. Studies headed up by Brian Wansink, director of the Food and Brand Lab at Cornell University in Ithaca, NY, concluded that “Subway has acquired a so-called “health halo” — people give themselves “credit” for eating at Subway and indulge in extra treats when they do so.

People also underestimate the calories consumed after eating at Subway, as compared to a hamburger fast food franchise, such as McDonalds”. (About.com, 2013) In the next ten years maybe Subway can deliver just as Pizza Hut and Dominoes. Continue to go Global. Develop a method where they can have free Wi-Fi days. Set up a KIOSK in store where customers can punch in their own orders. Develop a way the food can stay hot without the use of a microwave, perhaps solar energy (About.com, 2013) 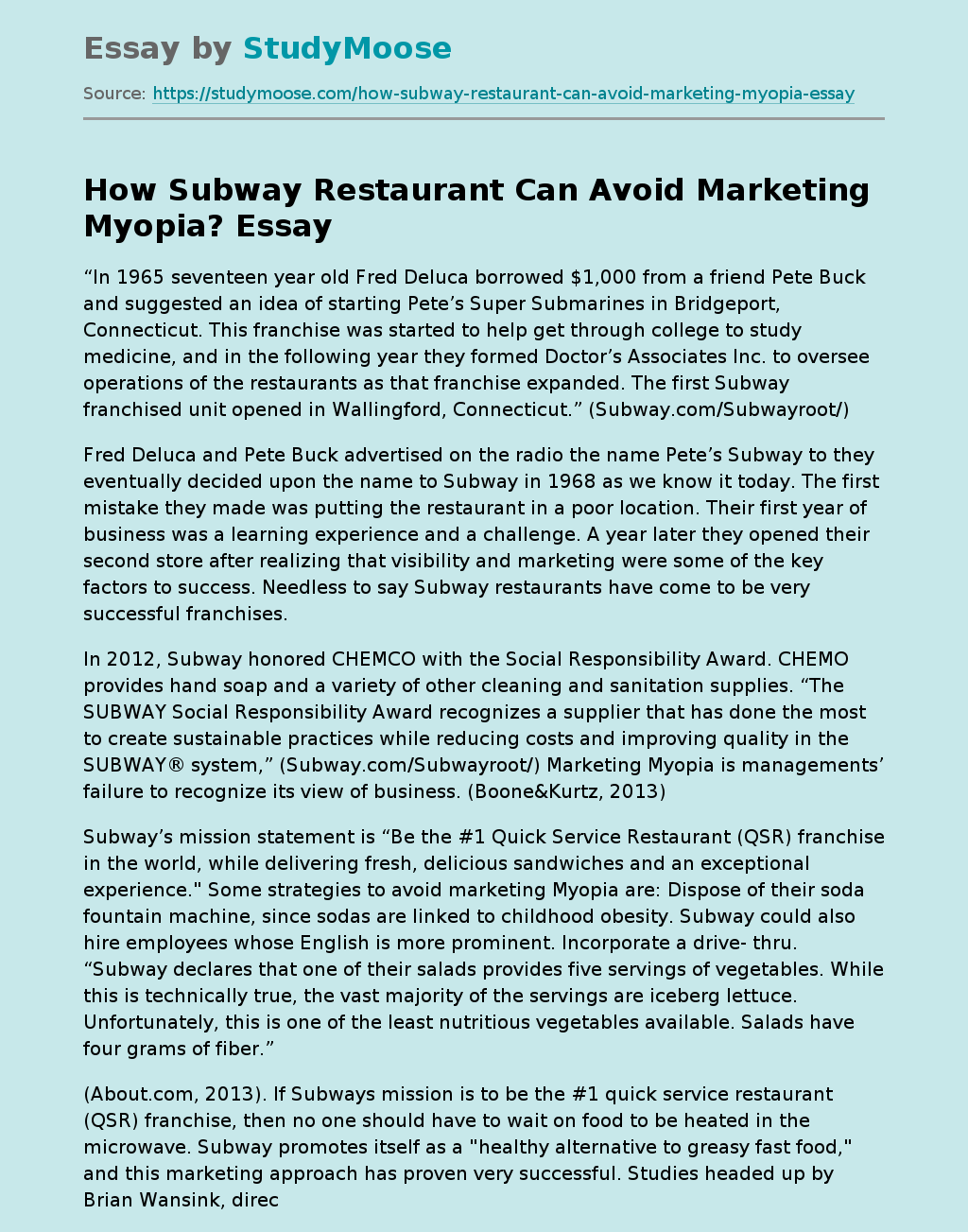