Sin in the Short Stories of Nathaniel Hawthorne

After analyzing several of Nathaniel Hawthorne’s short stories, it becomes apparent to the reader that he often wrote using the recurring theme of sin. Though sin is present in all of his works, there is much variation on the ways in which his characters come to understand the inherent evil that lurks inside every human being. Whether expressed in the form of selfishness, passion, or obsession, the sin is somehow masked and concealed from others, and prevents humans from achieving pure goodness (O’Toole).

Don't use plagiarized sources. Get your custom essay on
“ Sin in the Short Stories of Nathaniel Hawthorne ”
Get custom paper
NEW! smart matching with writer

Among Hawthorne’s many literary works, “The Birthmark,” “The Minister’s Black Veil,” and “Young Goodman Brown” provide excellent examples in depicting the variances among the common theme of evil and sin.

In “Young Goodman Brown,” Hawthorne creates a conflict between Brown and his own acceptance of sin in mankind. In the story, Goodman Brown ventures into the forest, where he meets a man who is described as, “about fifty years old…and bearing a considerable resemblance to him [Brown], though perhaps more in expression than features.

” (738) Yet perhaps the most significant part of this description is that of the staff this man carried, which, “bore the likeness of a great black snake,” (739) leading the reader to assume the man is evil, if not the devil himself.

The devil leads Goodman Brown to meeting place, deep within the woods, where many honorable society members are worshipping evil. Even the minister, who is the closest human to God, is there participating. However, possibly the most noteworthy character in attendance is Brown’s wife, Faith, who he previously called, “a blessed angel on earth.

” (Hawthorne, “Young Goodman Brown,” 738) While Goodman Brown went into the forest with the belief that all of his neighbors were pure and sin-free, he exited with an opposing opinion of them and can no longer look at them the same way he used to. With the statement, “There is no good on earth; and sin is but a name. Come, devil; for to thee is this world given,” (742) Hawthorne reiterates his theme that evil is present in the world, in both nature and the human spirit, and that even the most holy of people have some hidden evil lurking inside of them.

Similarly, in Hawthorne’s “The Minister’s Black Veil,” the author retains the theme of concealed sin. However, the conflict in the story is slightly different, being between the people and Hooper’s wearing of the veil, which symbolizes the acceptance of sin. In the story, Hooper, the town minister, suddenly decides to begin wearing a black veil, no matter what the occasion. The members of his congregation feel uncomfortable by this symbol though. One concludes, by the conclusion of the story, that Hawthorne intended for Hooper’s veil to symbolize sin, and the fact that the minister was wearing it demonstrated that he knew he has done wrong and accepted the reality that it could not be undone.

Father Hooper’s wearing of the black veil seems to impact his parishioners in that the members of the congregation felt as if they were also wearing veils simply because they felt the presence of Hooper’s. This is perhaps what the minister intended as he says, “I look around me, and lo! on every visage a Black Veil!” (Hawthorne, “The Minister’s Black Veil,” 759) seemingly convicting all people of having sins that they are hiding and need to recognize. Nathaniel Hawthorne not only describes the sin in every human being in this story, but also preaches that one should not look down upon another for their sins when they too have sinned.

Though the previously mentioned stories have been very similar in their depiction of sin, Mr. Hawthorne makes his theme more difficult to identify in his story “The Birthmark.” While the underlying theme of masked sin is still evident, it is conveyed through a story dealing with the author’s ideas about nature. The protagonist of the story, Aylmer, believes his wife, Georgiana, is perfect with the exception of the birthmark on her cheek. Due to his strong passion for science, Aylmer develops a method to remove this birthmark, demonstrating his selfishness, a trait that Hawthorne believes leads men to sin.

One night, Aylmer has a dream that when he removed the birthmark, it went into Georgiana’s heart. This dream leads readers to believe that the birthmark is an exterior representation of internal sin that only Georgiana knows of. In the story, the author says, “It was the fatal flaw of humanity which Nature, in one shape or another, stamps ineffaceably on all her productions, either to imply that they are temporary and finite, or that their perfection must be wrought by toil and pain.” (Hawthorne, “The Birthmark,” 768) This statement allows the reader to make the assumption that Nathaniel Hawthorne believed that the possession of flaws and sin is what characterizes humans, and that it is impossible to be perfect while living on earth.

Through a description of the three mentioned stories, “Young Goodman Brown,” “The Minister’s Black Veil,” and “The Birthmark,” readers come to understand the many ways in which Nathaniel Hawthorne conveyed his beliefs regarding sin. The conclusion is reached that all humans must have some form of sin, whether it be it the form of selfishness, passion, or any other manner, and that most people try to conceal these sins in order to appear perfect. Hawthorne also believes that sin can often times be so small that it goes unnoticed, yet it impacts the entirety of the sinner’s life. Many other similarities, besides the persistent theme of evil and sin, can be observed in Hawthorne’s works, yet this theme seems to be perhaps the most common and most apparent topic throughout his writings.

Sin in the Short Stories of Nathaniel Hawthorne. (2016, Jun 21). Retrieved from https://studymoose.com/sin-in-the-short-stories-of-nathaniel-hawthorne-essay 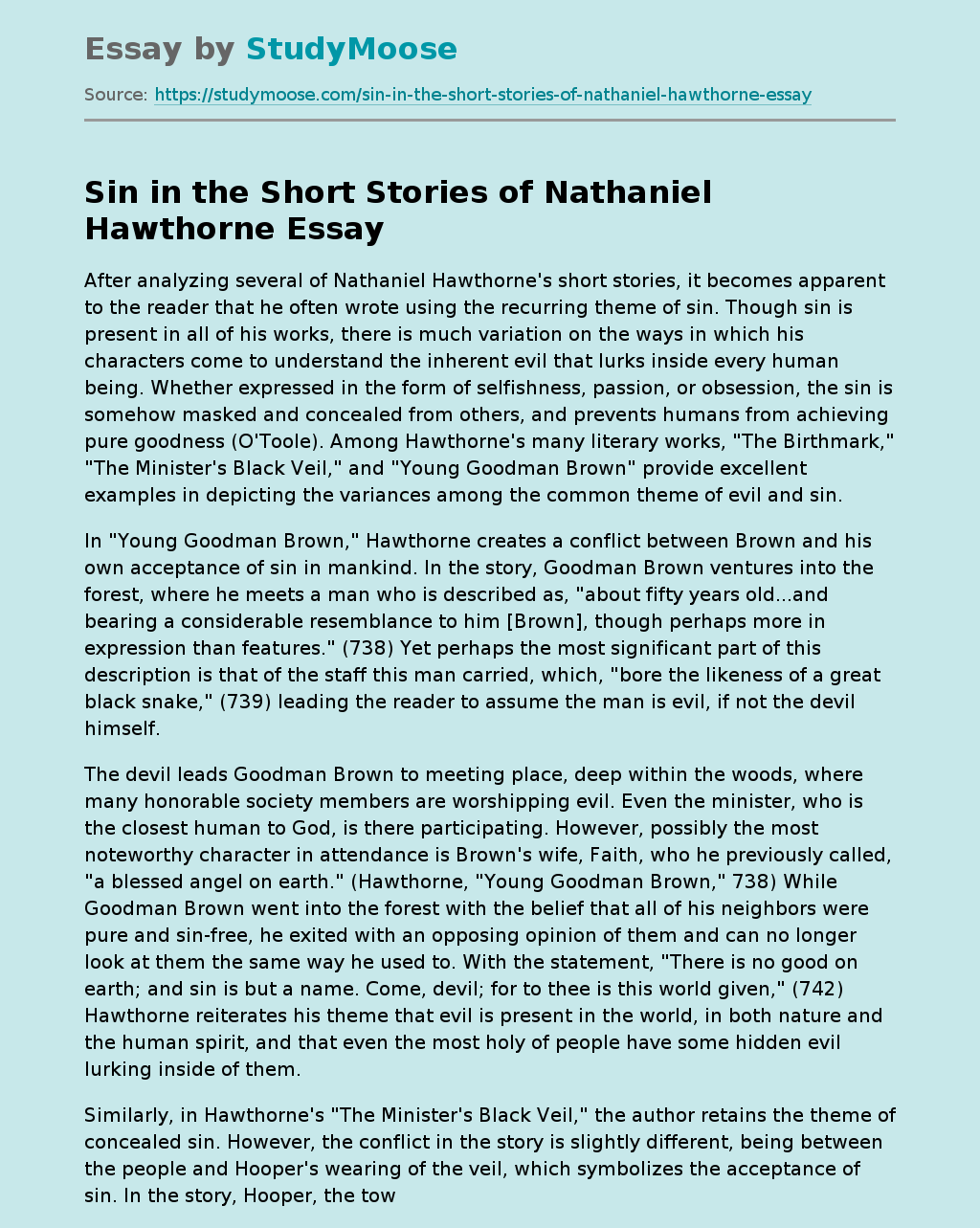