Don't use plagiarized sources. Get your custom essay on
“ Similarities and Differences Between English Bill of Rights and the Declaration Rights of Man and Citizen ”
Get custom paper
NEW! smart matching with writer

The kings that were ruling before those documents were created were both corrupted with power; the kings didn’t listen to the people and in the end they had enough and rebelled against the king and defeated the king. The revolutions that led to the declaration rights of man and citizen are different than the English bill of rights, the English revolution was also called the glorious revolution due to the fact the they had no or little bloodshed unlike the French.

The conflict that started the glorious revolution started when England was ruled by James the second.

England had many problems with two existing religions, the Catholics and the Protestants. King James the second was a catholic ruler and he vowed to restore England to Catholicism. He also persecuted the Protestants and also appointed Catholics to major job positions in the armed forces although it was strictly forbidden. (Burchill) He refused the parliament’s request and broke the laws the parliament passed out.

He also created the declaration of indulgence witch cancelled laws that were against Catholics; he then kept spending money without the permission of the parliament. Rayment) It raised many conflicts between the king and the parliament, the parliament was trying to figure out a way to replace the king with a Protestant ruler because he deliberately disobeyed the parliament and basically took control of everything. Not long after when they found out that James’s wife ‘Mary of Medina’ was pregnant with a male the parliament couldn’t take another catholic ruler like James so they sent a letter to William and Mary to take over James’ throne. Blue) Although James had a much bigger army than William’s, lots of soldiers betrayed James and joined the other side; scared that they will kill him; he fled to France. (Harris) It was after the battle that they called it the glorious revolution, it was called glorious because in which religious and political problems were solved without bloodshed. February 2nd 1689 William and Mary were crowned as the first ruler where two people equally share the power. (Stuart) That year the English Bills of Rights were written which basically limited the power of the monarchs and that there are limits to what the King or Queen can do.

William and Mary humbly accepted the document and signed, a new type of government also rose in which the people could choose who ruled their kingdom, and it was called a democratic government. (Stuart) King Louis XVI controlled France during 1754-1793; the population was unevenly divided; the 3rd estate makes up about 97% of the entire population. The 3rd estate was very poor, they rarely could pay of rent or even pay for their food. Due to the huge debt king Lois owes from joining a war to help the Americans hoping avenge his grandfather’s losses to Britain he raised taxes. Roberts) It made the people more angry; winter also came and created a drought which raised the cost of food. The majority of people couldn’t pay for food anymore so they robbed people, broke into houses and bakeries and stole anything they could. It left King Louis with no choice but to call the general estates which are a group of people who represents the different classes of France to a meeting. (Roberts) Then later they found out that they were dismissed by the king and then they got very angry and went to the tennis court. They took the tennis court of oath where they vowed to stay there until the king make changes. Roberts) King Louis sent his army, and then they took action and marched to the bastille where they got weapons, guns and gunpowder. They raped, killed and robbed all nobles they could see; it was called the ‘Great Fear’; they created the new document called ‘The declaration right of man and citizen’. (Roberts) They sent it to the king and he again refused. Women gathered up and marched to the king complaining that they want bread; it was called the bread march, 20,000 women came and gather around the Versailles. (Roberts) They forced the king to sign the Declaration rights of man and citizen.

They forced King Louis to move to Paris; King Louis was forced to sign law after law. (Day) They had to find a way to get out and they disguised themselves as peasants and fled where later they were caught by revolution guards, while the king was just miles away from Austria. Robespierre was later crowned king, the country scared that the Austrians will send an army to counter the revolution. The Austrians came and joined with Prussia threatened to destroy French if anything happen to the royal family. (French Revolution Wars) The people got even angrier and killed the king.

Prussia and Austria were gaining land swiftly; lots of citizens were motivated and they started to join the war to help defend France. Charlotte Corday thought that by killing Marat there would be peace in his country, she came and stabbed him while he was in his medicinal bath. Not attempting to flee she was captured and guillotined; she believed with the death of Marat that her country would be safe. (Roberts) Marie’s son were taken away, and not long after he died and later Marie was killed in the guillotine too and the royal family who once ruled they France disappeared. Ibis) The two documents have many similarities and differences, they similar on the reason why they were created. Both kings didn’t listen to the people which led to their revolution. On the other hand, the French revolutions were very different than that of the English. The French revolution is much more violent; due to the long terms of hunger the French people were much angrier which led to their actions for killing all nobles and clergy, and eventually nearly everyone that was in prison including the king. Tale) The English Bill of Rights were not written by 3rd estate, they were written by the people who had money, which they live in a much better condition than the people in the French revolution. The British’s revolution was called the glorious revolution because their religious and political problems were resolved with little bloodshed unlike the French. (Glorious) The people of England didn’t like the King at all; he just doesn’t treat everyone equally and couldn’t except two religions living in peace side by side.

When William and Mary came to overthrow James II, they were greatly outnumbered but lots of soldiers betrayed him and joined to the other side which led to their victory. (Harris) The document itself were quite different the ‘Declaration rights of man and citizen’ were focused on freedom for people and how they are equal in right no matter where you came from at birth, (Estates general) but the ‘English Bill of rights’ were focused on limiting the power of the king and gave a birth to a new form of government that is used in most countries today called democratic.

However both documents had topics that focus on natural rights. Those two documents greatly affect the rights that everyone has now; those two documents are the models of equality between people and the rights we are born with and a government in which the ruler is chosen by the majority of the people. The English bill of rights and the declaration rights of man and citizen are similar and different in some ways. The documents were created during similar conditions; both King James II and Louis XVI were corrupted with power and treated others unfairly which led to their countries’ revolution.

Similarities and Differences Between English Bill of Rights and the Declaration Rights of Man and Citizen. (2020, Jun 02). Retrieved from https://studymoose.com/similarities-and-differences-between-english-bill-of-rights-and-the-declaration-rights-of-man-and-citizen-new-essay 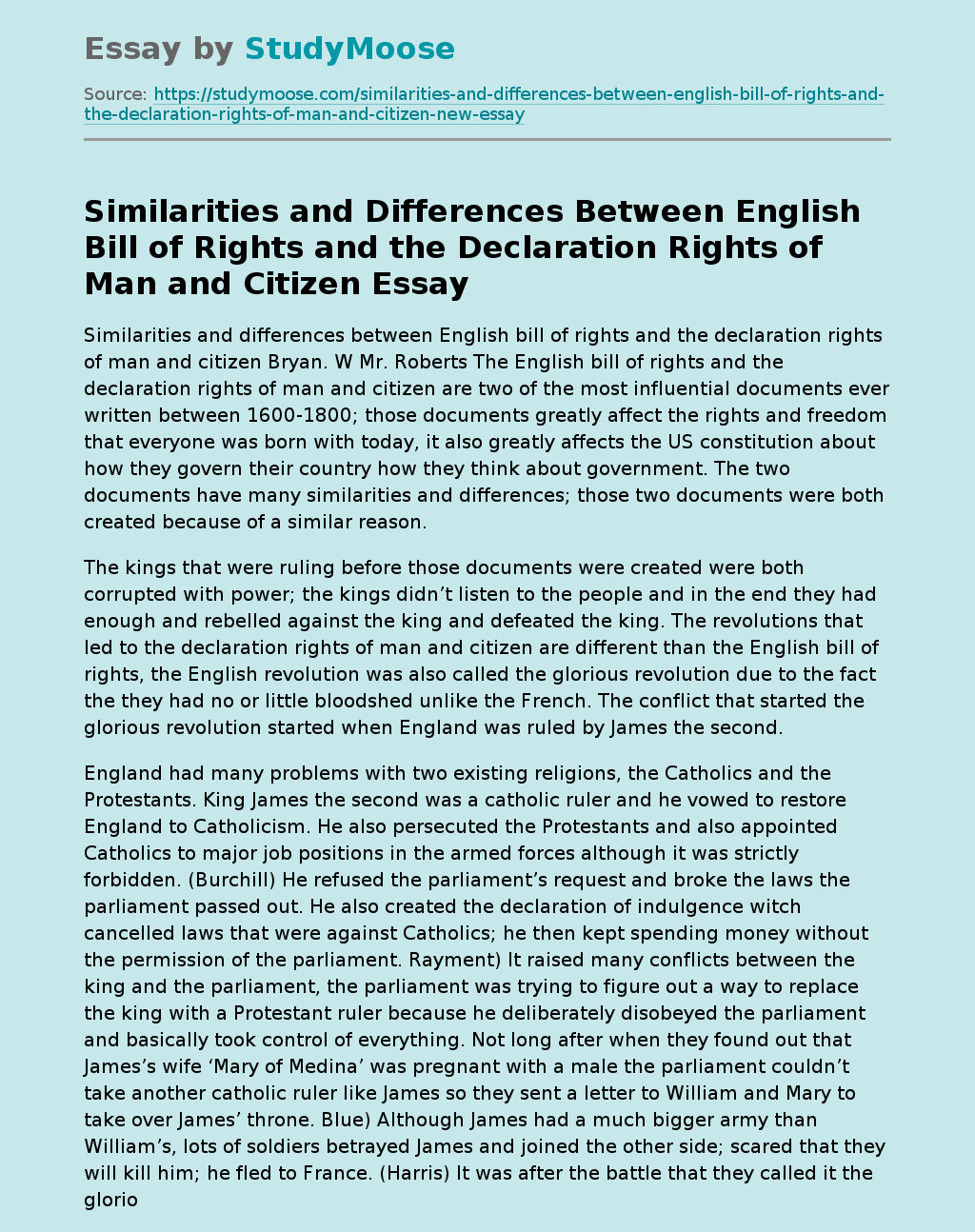