Declaration of Sentiments for Women’s Rights

Elizabeth Cady Stanton drafted the Declaration of sentiments for women’s rights suffrage at Wesleyan Chapel at Seneca Falls, New York, on July 19, 1848. (Scholastic) It was based on the Declaration of Independence and described the types if discrimination women faced in America. She presented at the first women’s rights convention. Other women like Lucrettia Mott helped play a major role.

There was a list of issues that were “resolved” during this convention. Also, Stanton stated things such as women having to be obedient to their husbands, if married they were civilly dead in the eye of the law, and in case of separation, she loses all power goes to the man.

Don't use plagiarized sources. Get your custom essay on
“ Declaration of Sentiments for Women’s Rights ”
Get custom paper
NEW! smart matching with writer

This declaration stated that “all men and women were created equal,” and demanded that women be given “the sacred right of elective franchise.”

(Womes Vote, Womens voices) Stanton not only spoke up about women’s rights, but also against slavery. She believed in equality for all of humanity. (Womens Vote, Womens Voice) The unfair treatment of women by men was one of the most important points of the Declaration of Sentiments.

The demand make known by this document was the demand for women to get equal rights as men that also included suffrage.

Stanton specifically and purposely listed ways some were treated unfairly. This document was written to show that women shouldn’t be treated an insignificant or unimportant part of America. They had a voice and they had something to offer. They didn’t want to be seen as property.

It wasn’t until many years later when the 19th amendment for women’s right came but this was the very first time women had stood up for themselves against men and the government. Throughout the entire document, Stanton referred to our country as “He” This shows me that at that time there were no rights for women at all.

She is outright holding responsible the lawmakers and leaders who were all men. The women who put this together went against what was acceptable for the time and were all very brave. Of course they were made fun of by the newspapers and were criticized for their behavior. (Women’s Rights) This kind of conduct was radical for that time. If it wasn’t for Elizabeth Stanton and the other women activist that day, who knows if women would have equality. This gave other women the courage to stand up for themselves. I am thankful for this declaration because I know that women are sometimes looked at a lesser power even today in the 2000s, I could only imagine what the women of the 1800s had to deal with. This text is still significant today because women can learn from what Stanton did and use her ways and ideas hundreds of years later. By looking back and seeing that they were able to make a change even though it seemed impossible is very liberating. The document is both socially and historically important because of how effectively it represents the women’s rights struggle of the nineteenth and later centuries and because of what the document and societies reaction to it tells historians about this period in American history.

The documents format and wording, in many places word for word, are the same as what was used in the Declaration of Independence which is one of the nation’s most respected documents. By mimicking the struggle of America’s founders and the women’s rights movement the document uses the most extremely held beliefs of the American people as its base. This makes the document dramatic, unforgettable, and powerful. It is compared to the declaration of independence many times, proving that women’s suffrage is an imperative matter. The words are strong and open the eyes of Americans that women shouldn’t be treated any less.

Declaration of Sentiments for Women’s Rights. (2016, May 16). Retrieved from https://studymoose.com/declaration-of-sentiments-for-womens-rights-essay 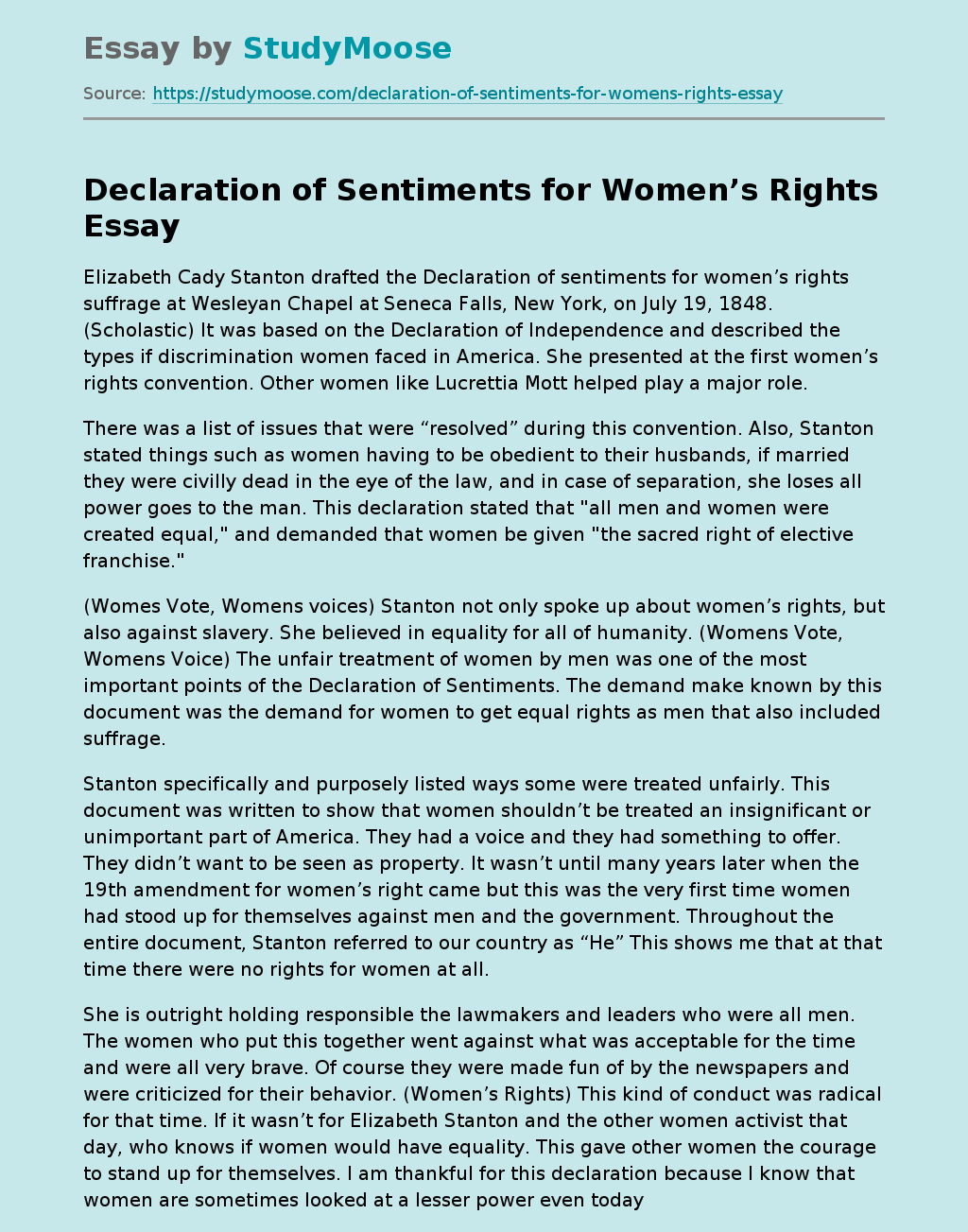