In the last few years, there has been a tremendous amount of school shootings around the world. Like Sandy Hook Elementary were Adam Lanza fatally shot and killed 20 students and 6 staff members. Since then the students, teachers and concerned citizens have be wondering as to what needs to be done to end mass shootings in America. The question is, will arming teachers with concealed weapons be the right answer to solving this issue. In this paper I will be taking about the danger a gun will have on the students and teachers in class, the cost of training it will cost for teachers to be trained and the stress teacher will be under from the fear it will bring to them to protect there students.

Don't use plagiarized sources. Get your custom essay on
“ Should Teacher’s Carry Concealed Weapons ”
Get custom paper
NEW! smart matching with writer

According to The Editors/ Marie Claire, Feb 23, 2018 the main idea of this subject is that teachers think it’s the worst idea for them to be concealed with weapons. He interviews 30 teachers from all around the world about the idea of carrying guns and here’s what a few of them had to say… “Arming teachers in the classroom as a means of protection is not an appropriate or productive way to prevent future shootings.

This would send the wrong message to young students in my classroom. I would never want my students to believe that concealed weapons in our classroom are necessary to be safe. My values are not for sale, and therefore and monetary compensation would not change my opinion on this matter.”- Alex, 27, teaches 1st grade in Chicago, IL.

Students needs to be in an environment were they can learn and have positive energy. Bringing a gun into the class will enforce things we are trying to avoid in the classroom. This could also lead into the teacher coming back the next day and her weapon could have been taken by a student. This makes up more criminals inside the school. When you put lots of weapons in a school, this can become a security problem that puts people in harm of danger. One of the main issues, is the safety on both the teacher and students. Many people don’t like guns and have fear of shooting one.

So why would you want to force someone who doesn’t want to carry the gun into carrying it that may lead into false alarms. Allowing this would add the danger to students in to facing it rather than reducing the fear. Most school systems have done a bad job in preparing teachers and students for classroom situations like this. Another, women who was interview thought the idea was pointless because she was more worried about the students who have mental health issues need emotional support on how to deal with situations like this. She said… “I don’t need a gun; I need lawmakers who put students lives before a civilian right to an assault rifle. As a teacher of children, I have gotten to know many kids who need mental health support but can’t get it due to lack of resources. Students need emotional support on how to deal with trauma and anger. We need our students to feel say, and they want if the school is loaded down with guns.” Ashely teaches 4th grade in Illinois.

In conclusion of this topic, I don’t think this will solve any problems because all in all there is no way to keep the school, parents, or the community happy. Everyone will have something to say then that will be led into another problem as well. Also, students can be put in risk of an injury in the event of an accident made by the teacher. Teachers may get mad a student and use that against them, and they might even threaten them. According to Trevor, who teaches 11th and 12th grade in Georgia says… “the idea of arming teachers in nothing short of ludicrous. He thinks this would place them in a position of seeing every student in school as a threat”. Students may fear that now the teacher have power over the class and may flip out when ever she wants too and use her weapon in a way that will scare the class into being better students.

Another idea, by Yuval Rosenburg/ The Fiscal Times, February 22, 2018 is will arming teachers in America as Donald Trump have proposed cost a lot. According to this source the answer is yes. That means is there was a law that was passed to allow teachers to carry guns. It will be roughly 718,000 teachers’ nationwide that will have to be trained. In Yuval Rosenburg article “providing basic firearm training for teachers would cost about 71.8 million dollars. More robust training created for teachers in active shooter scenarios might run about 1,000 dollars per trainee, or 718 million totals”. Therefore, getting teachers trained will cost more than expected. Not only to mention after training them you must buy guns as well. That’s other expenses they would have to investigate as well. According to Yuval Rosenburg article “buying hundreds of thousands of Glock G17 pistols would add about 360 million to the line”. That if the government doesn’t get a discount for it. Then the total cost would go up to about 250 million, which includes the training and the guns. But if schools’ systems choose not to get the basic training and just purchase the guns, that would bring the cost down to about 180 million according to Yuval’s article.

Not training teachers would even be a worse idea, that would lead into more problems, being that teachers might not know how to use it and then accidentally use it the wrong way. Even with the proper training, there’s no way a teacher with a weapon can take down a shooter. In conclusion, in Yuval Rosenburg article the average cost a year estimates to about 12 billion a year. Which would not be the best solution to it. Not only to mention the cost of the training and buying the guns. Teachers may be required to renew their training. They may also have to be able to maintain the course knowledge and be tested regularly. All this encounters money and most schools now are already having difficulties with budgeting the cost of needs each school year. Rather than spending the money on something that would cause more problems, they should spend it on something to better the school system that would be beneficial to everyone.

A third writer, Dave Anderson / List land, states that teachers will be under a lot of stress from the responsibility having a gun could carry onto them and being fearful of the danger it may cause. Teachers already have a lot on there hands with it already be stressful enough and then adding a gun would make it more stressful for them. Teachers take care of there students like their own. Many students get really attached to there favorite teacher. They are like parents and mentors to their students. Also, teachers are the most stressed people in their community. For most of them adding guns too, is like asking them to be there legal guardian. 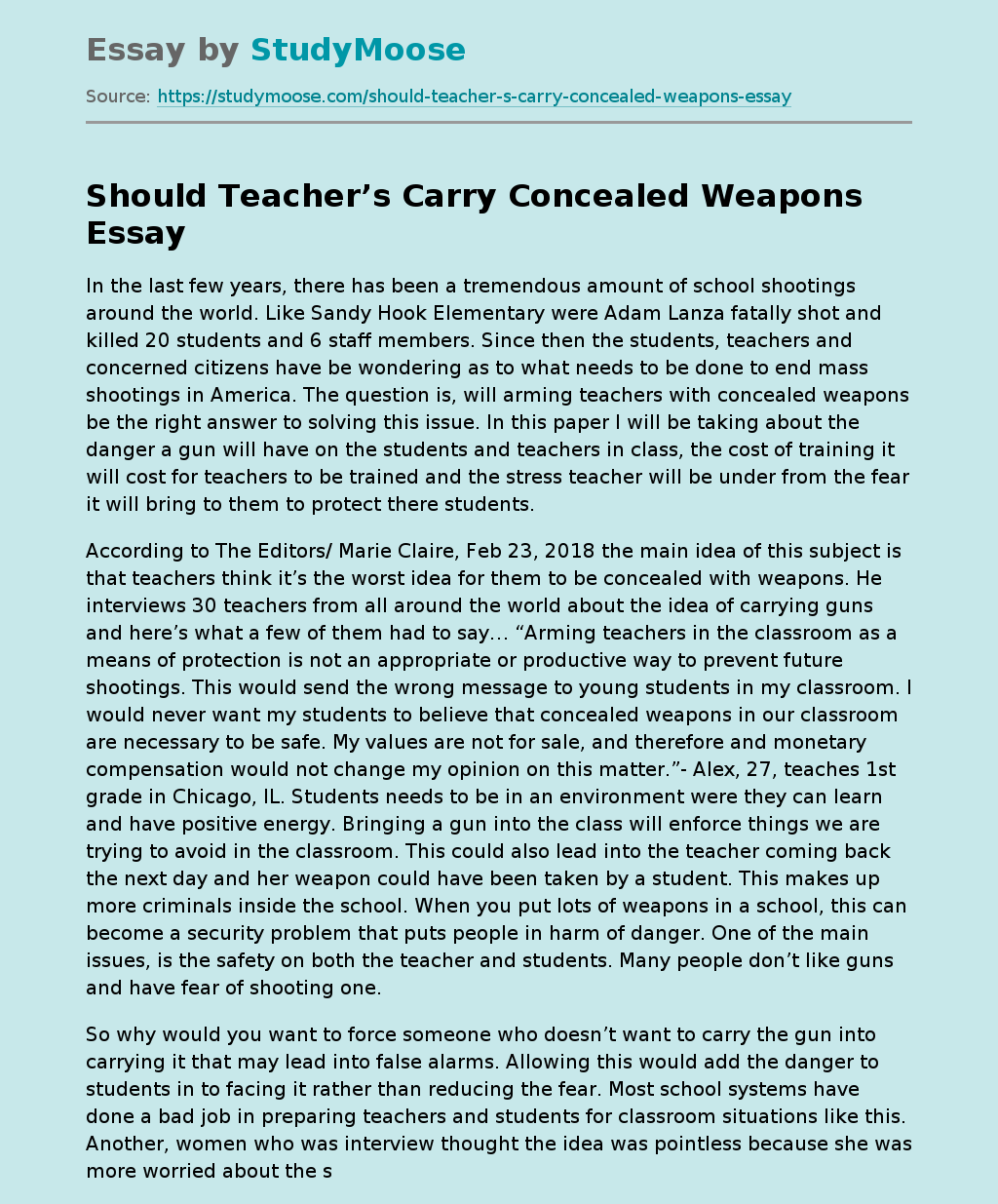