Should Students Have to Wear Uniform

You wake up and you ponder on what you should wear what shoes to put on, and what color will look nice on you. It’s hard if you think about it, when deciding what to wear in the morning you usually have to wake up early or set it out from the night before. Well that doesn’t have to be, you know why? Because uniforms should be mandatory in school. Uniforms are so helpful you don’t need to wake up early or set anything out at night.

Don't use plagiarized sources. Get your custom essay on
“ Should Students Have to Wear Uniform ”
Get custom paper
NEW! smart matching with writer

When having a uniform, all you have to do is make sure it’s clean and ready to put on. Yet others may think that having a uniform is just not cool, everyone has to look the same and they can’t express themselves, or it just too much money yet it would be a way of saving money at the end. Everyone has an opinion on if students should have a uniform or not and ‘Student should have to wear a uniform”.

This essay will explain to you why students should wear uniforms.

Think about this parent, every year you have to do a series of shopping for your kids. You have to buy an amount of shirts, pants, sweaters, and shoes when you could’ve just bought a uniform for fewer amounts that already includes everything for one set price. When you get to at least middle grade, you want what everybody has and sometimes your parents can’t afford to give you what you want, so having a uniform would just be better because everybody would be the same thing.

Yes it may seem as if the uniform is expensive at first, but when you pay that one price it will last you the year, then you don’t have to worry about needing new items or anything. Uniforms are also better for parents who don’t have a stable finance to support buying brand names clothing. When parents save money on buying you clothes for back to school, that money could to something better for you or everybody else in your family.

Would just be better because everybody would be equally and yes it may seem as if the uniforms are expense at first but when you pay that one price then you don’t have to worry about needing new items or anything . Uniforms are also better for parents who don’t have stable finances to support buying brand names clothing this would also help and it’s just better. When parents save money on buying you clothes for back to school that money could go towards something better for you or everybody.

When having a uniform everybody looks the same and you can’t express your feelings or the way you look. Except sometimes that not a reason. You can express yourself through the ways of how you talk or how you act or what extracurricular activities you do.

Clothes don’t necessarily help you. Schools all ready put restrictions on what you wear, so why not just wear uniforms and once a month get dress down day. Wearing the same uniform isn’t that bad, as you could be so much more prepared in the morning .Uniforms also help identify who belongs to your school and who doesn’t making your school and yourself safe. So it is good to wear uniforms even if you’re wearing the same thing as everybody else.

Sometimes students don’t really care about the work they care about how they look and if they are wearing the latest trends. It is mostly a distraction sitting in class trying to understand the work assigned but you can’t because you’re focused on what people are wearing if they look good or bad, or if people are wearing the same things .Wearing a uniform would prevent all that because you’re not focused on others choice of clothing. Wearing a uniform you wouldn’t be focused on everyone because would wear the same thing as yourself and you really can’t judge anyone to see who is wearing the best outfit. Therefore, helping you understand your work better. Wearing the hottest trends may be fun but failing isn’t.

These three major points explain a lot it has given you a new look on things which has shown that wearing a uniform isn’t bad. It helps you feel equal, helps you pass school, and lastly helps let your parents save money so that it could go to better things. Wearing a uniform is good and it shows school spirit some believe when wearing the same uniform you are able to stand stronger as a school and support each other when wearing a uniform, everyone is equally no one is put ahead and no one is last everyone is equally .uniforms are a great idea, as it would save you time and money so everyone would be happy .Its more stressful when having to chose what you should wear everyday or wearing inappropriate things.

If you look at it the pros outweigh the cons in terms of wearing a uniform because the cons of wearing a uniform is that you lose self expression, may lessen a child comfort while attending school, school should be a place of diversity, the cost of uniforms could be expensive, and lastly uniform rules are hard to enforce. Expect the cons are way better as in less stress, less money, equality, education, not as much time in the morning trying to get ready, and safety. You think about the pros are higher in wearing uniforms and are true.

At school it’s all about your education. Yes, it is nice to dress up and show that you have clothes but trying to express your personality through clothes isn’t really a problem because people wear uniforms and yet they are some that are the nicest people who are full of excitement and clothes weren’t a factor in this It’s how you portray yourself if you have a uniform .You should be able to express yourself through it. Wearing a uniform shows discipline as it shows that you came from somewhere that was organized that had values so wearing a uniform to school isn’t bad.

Students should wear uniforms after these valid points; Uniforms are a better way to go if one were to about. You wake up one morning and you look around knowing that you have a uniform you could sleep for an extra 10 minutes and you could wake up not having to worry what you should put on. Think about that and describe your feelings towards that. Its better isn’t it? Uniforms are something we all need it’s something we should all want and have as they are just better in the long run. Hopefully now you would want a uniform better yet knowing uniforms are great .Nothing is better than that everyone should feel and be equal when wearing uniforms.

Should Students Have to Wear Uniform. (2016, Mar 24). Retrieved from https://studymoose.com/should-students-have-to-wear-uniform-essay 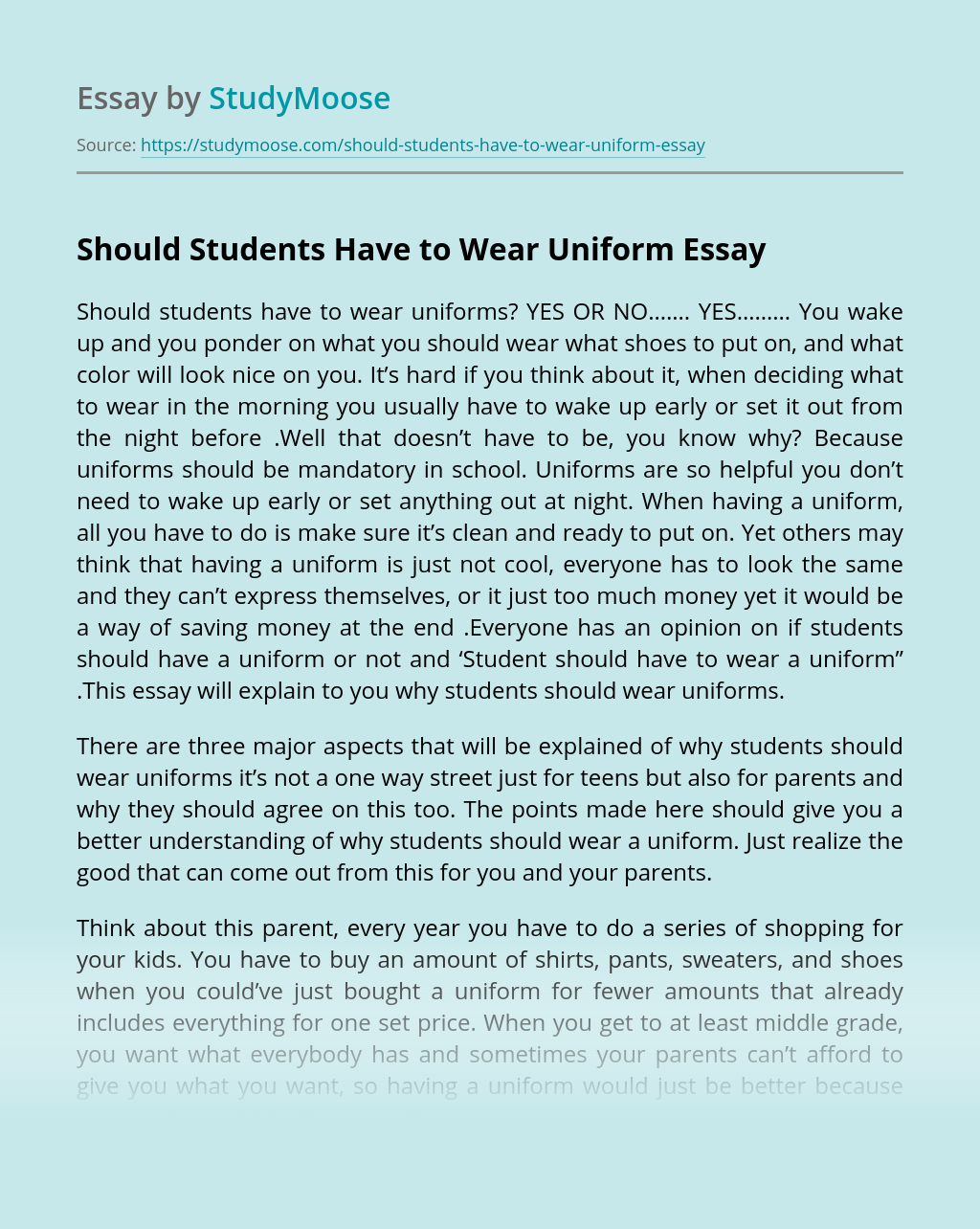