Should marijuana be a medical option?

This debate has been going on for over 4743 years. The first dated use of marijuana was in 2737 BC when the emperor of China, Shen-Nung, prescribes cannabis for beri-beri, constipation, ‘female weakness,’ gout, malaria, rheumatism and absentmindedness. One of the most interesting factors in this pro and con debate is that until the late 1800’s not many people were against the use of cannabis for medical purposes. But from 1856 – 1937 marijuana’s image as a medicine turned into the image as an intoxicant.

Don't use plagiarized sources. Get your custom essay on
“ Should marijuana be a medical option? ”
Get custom paper
NEW! smart matching with writer

Ever since the image changed the medical community suffered.

In 1937 the debate was at one of its highest peaks in United States history. In April of that year a representative for the Ways and Means Committee instead of bringing his concern on cannabis to other appropriate committees such as food and drug, agriculture, textiles, commerce, etc., he brought it directly to Congress by spring of the same year. Only one pertinent question was asked from the floor: “Did anyone consult with the American Medical Association and get their opinion?”A representative answering for the Ways and Means Committee replied, “Yes, we have.

A Dr. Wharton and the American Medical Association are in complete agreement!” With that reply the bill passed and became law later in December of that year.

There were only two problems with the statement from the Ways and Means Committee. First there was no Dr. Wharton with the American Medical Association; there was only a Dr. Woodward. Second Dr. Woodward was in complete disagreement with the bill.

Not only that but Dr. Woodward and the American Medical Association knew nothing about the hearing until two days before the bill was passed.

To be able to debate the question: “Should marijuana be a medical option?” you must first see if marijuana has medical values. Dr. Joycelyn Elders noted in the Providence Journal of Rhode Island: “The evidence is overwhelming that marijuana can relieve certain types of pain, nausea, vomiting and other symptoms caused by such illnesses as multiple sclerosis, cancer and AIDS — or by the harsh drugs sometimes used to treat them. And it can do so with remarkable safety. Indeed, marijuana is less toxic than many of the drugs that physicians prescribe every day.”This was not too long ago in March of 2004. Having said that quote, it brings a lot of emphasis on how much the law against marijuana is negatively effecting the medical community and the patients suffering form multiple sclerosis, cancer and AIDS. All these patients surely get some kind of medical attention but prescribing them marijuana would be far more effective and less of a risk compared to other drugs these patients get prescribed each day.

In the same mindset as Dr. Joycelyn Elders, Dr. Lester Grinspoon has a strong belief in the positive uses of medical marijuana, one of my most attention grabbing points in his quote is marijuana being less expensive than the conventional medicines like Marinol that tries to have the same effect on patients considering it has the same active chemical, tetra-hydro-cannabin (THC), as marijuana, but when patients are put on Marinol they don’t experience the same improvements that patients on medical marijuana experience. That just proves that nature has a better medicine than any man can create even if the two have the same active chemical they don’t carry the same results.

In August 2003 The Boston Globe had quoted an emeritus professor of psychiatry at Harvard Medical School, Dr. Lester Grinspoon, who stated: “Doctors and nurses have seen that for many patients, cannabis is more useful, less toxic, and less expensive than the conventional medicines prescribed for diverse syndromes and symptoms, including multiple sclerosis, Crohn’s disease, migraine headaches, severe nausea and vomiting, convulsive disorders, the AIDS wasting syndrome, chronic pain, and many others.”Dr. Andrew Weil is a very strong “key expert” in the debate on legalizing medical marijuana. He is highly educated with an A.B. in Biology/Botany at Harvard University and an M.D. also at Harvard Medical School. As a physician he expresses his concern for patients that need more that Marinol, fabricated in a lab, patients need the natural herb that at a less intoxicating risk do more good to the patients situation.

On June 6th of 2002 the San Francisco Chronicle quotes Dr. Andrew Weil: “Unfortunately, the only legal substitute [to marijuana] available now — a prescription pill containing synthetic THC, marijuana’s main psychoactive component — is not EFFECTIVE enough for many patients. I hear regularly from patients that the pill does not work as well as the natural herb, and causes much greater intoxication.”Professor Donald Abrams, M.D., from the University of California in San Francisco, conducting U.S. Government approved research on the effects of smoked marijuana and AIDS stated in one of his lectures: “When we look at the pharmacopeias, when taken by mouth, delta-9 THC [Marinol] has a very low 6 to 20 percent absorption, and it’s very variable from one person to another…. The amount of THC one is exposed to might be the same, but certainly the effects are much different.

In patients who say, ‘I can control the onset and the duration much easier if I smoke than if I swallow it’ are telling us just what we know from the pharmacopeias.”Another good strong argument on how, for example, it’s not about the effects of marijuana on lab rats, but the effects of marijuana on patients and how well each individual patient reacts to the drug. That’s way it is important for the patient to get his amount of THC not the usual amount for his symptom.

On the other hand, a debate is pointless if there is only one side to it. Having that said, Dr. Liliana Bachs, Senior Medical Officer in the Divisions of Forensic Toxicology and Drug Abuse, Norwegian Institute of Public Health, who stated: “About marijuana as a medical option, I do not think that marijuana has more advantages than other therapies, taking the side effects into consideration. So the answer is no.”Many doctors have their own view on different prescriptions but one way to know which doctor to trust is to look at what hospital or lab he/she works in. Since Dr. Liliana Bachs works for the Norwegian Institute of Public Health in the Divisions of Forensic Toxicology and Drug Abuse, she will most certainly look at the situation as an experiment not as whether or not the patient is actually better.

This brings to mind the phrase: “The surgery was a success, but the patient didn’t make it.”In October of 2001 Dr. David W. Brook a Yale University School of Medicine graduate stated: “The AMA has never supported the use of unapproved medicines and their policy doesn’t support the use of marijuana. There has been little in well-designed studies on the topic. I would be interested in seeing more research to see if it can be conclusively shown that it is better than other medications.”Many people consider him well schooled and an expert in his field but, his statement is in contradiction with historical facts similar to the problem that persisted when medical marijuana became outlawed in 1937. The American Medical Association and Dr. William G. Woodward were both backing up the statement: “He said, in effect, the entire fabric of federal testimony was tabloid sensationalism! No real testimony had been heard!

This law, passed in ignorance, could possibly deny the world a potential medicine, especially now that the medical world was just beginning to find which ingredients in cannabis were active.”Therefore, Dr. David W. Brook should do his research before trying to represent the American Medical Association. I personally have great reason to believe that the association has become a puppet of the United States government, which is the worst curse you can put on an organization that’s trying to help fellow citizens that can’t afford the price of synthetic Marinol or don’t have much coverage. So the debate of marijuana instead of being a health debate it’s becoming an economical debate.

Another known fact is that according to the U.S. government, marijuana alone has never caused an overdose death. Information provided by the American Medical Association.

The California Narcotics Officer’s Association in regards to the debate on medical marijuana concluded that: “The overriding objective behind this [medical marijuana]movement is to allow a minority (less than five percent) of our society to get ‘stoned’ with impunity. This small minority is willing to put our citizens at risk from all the negative and disastrous effects caused to and by those who are intoxicated. What we don’t need in this society is more intoxicated people on our highways, in workplaces, schools, colleges, or in our homes.”The conclusion sounds so poetic, except for the fact that it’s for the wrong topic. We are talking about medically “restricted” use of marijuana. If it becomes medically legal from a Schedule I drug to a Schedule II drug than it will still be restricted to the patients that actually need it not a 18-year-old that wants to get ‘stoned’.

On a better note The American Public Health Association sees things a bit more clearly in their conclusion, stating: “[The American Public Health Association]…urges the Administration and Congress to move expeditiously to make cannabis available as a legal medicine where shown to be safe and effective and to immediately allow access to therapeutic cannabis through the Investigational New Drug Program.”Finally an organization I can truly concur with. Besides being a natural herb, marijuana is a great medication for people with over 222 conditions that medical marijuana can be used in. These can be seen on the next three pages.

For these facts and many more medical marijuana should be legalized and offered free of charged to all patients that are in great health risks including the 222 conditions mentioned. Since it can easily be harvested like it was back in 1850 when the U.S census of records shows 8,327 cannabis plantations of over 2,000 acres each. Come on United States government we can do this we can change the well being of many patients in near death or extreme suffering conditions. To conclude the six long pages in a phrase I’ll say: “Lets legalize with provable facts what once became illegal through a mere lie!”Sources used from:http://www.medicalmarijuanaprocon.org/Sources.htm

Should marijuana be a medical option?. (2016, Jul 07). Retrieved from http://studymoose.com/should-marijuana-be-a-medical-option-essay 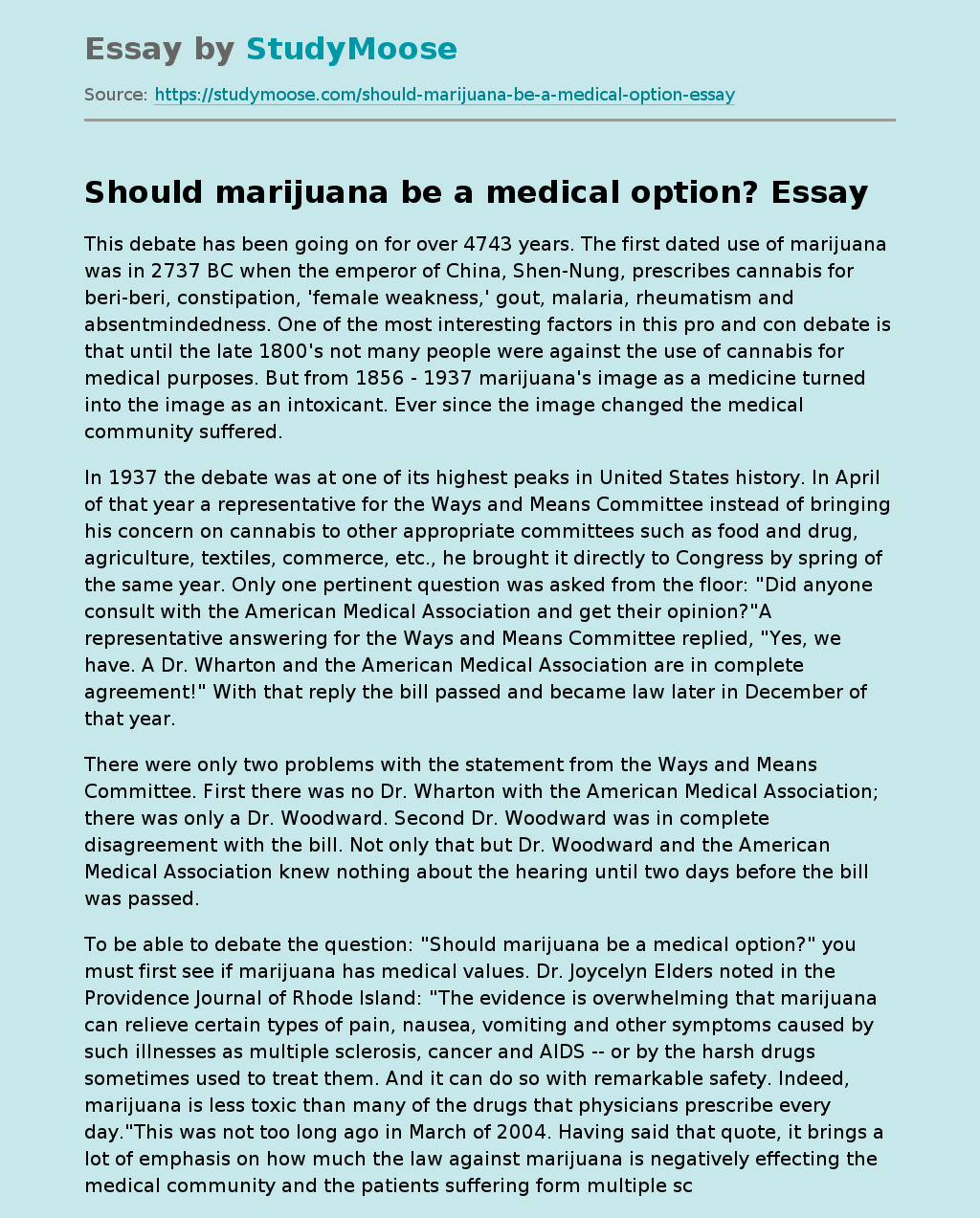