Should Euthanasia Be Legalized in the Philippines?

When do we know when it is “right” or not to intentionally end a life? One of the biggest controversies of this decade is euthanasia. Euthanasia is inducing the painless death of a person for reasons assumed to be merciful. The first argument against Euthanasia is that we should preserve life.

Don't use plagiarized sources.
Get Your Custom Essay on Should Euthanasia Be Legalized in the Philippines? Just from $13,9/Page

We must tell here that the introduction of contraception is always done in a context of increasing immorality spread by television, movies, advertisements, magazines, sexual education in the schools, and so on. It is the liberation of sexuality, and this immorality increases the need of to practice contraception.

But after some years, this contraception obviously induces an anti-conception mentality. So it becomes easy to introduce abortion. In the beginning, it was said that abortion was introduced only in order to help poor women victims of rape, and such other cases.

But very quickly, abortion became permitted for all women who do not want any more babies. Now after some years, abortion has made a mortal breach in the respect of life. Then, people having no more respect for life, euthanasia can easily be introduced. We must spread the doctrine of the faith, help people to understand what is the meaning of life and death according to the Revelation made by Our Lord Jesus Christ. We must fight for life, fight against contraception, abortion, and euthanasia.

Should Euthanasia Be Legalized in the Philippines?. (2016, Oct 11). Retrieved from https://studymoose.com/should-euthanasia-be-legalized-in-the-philippines-essay 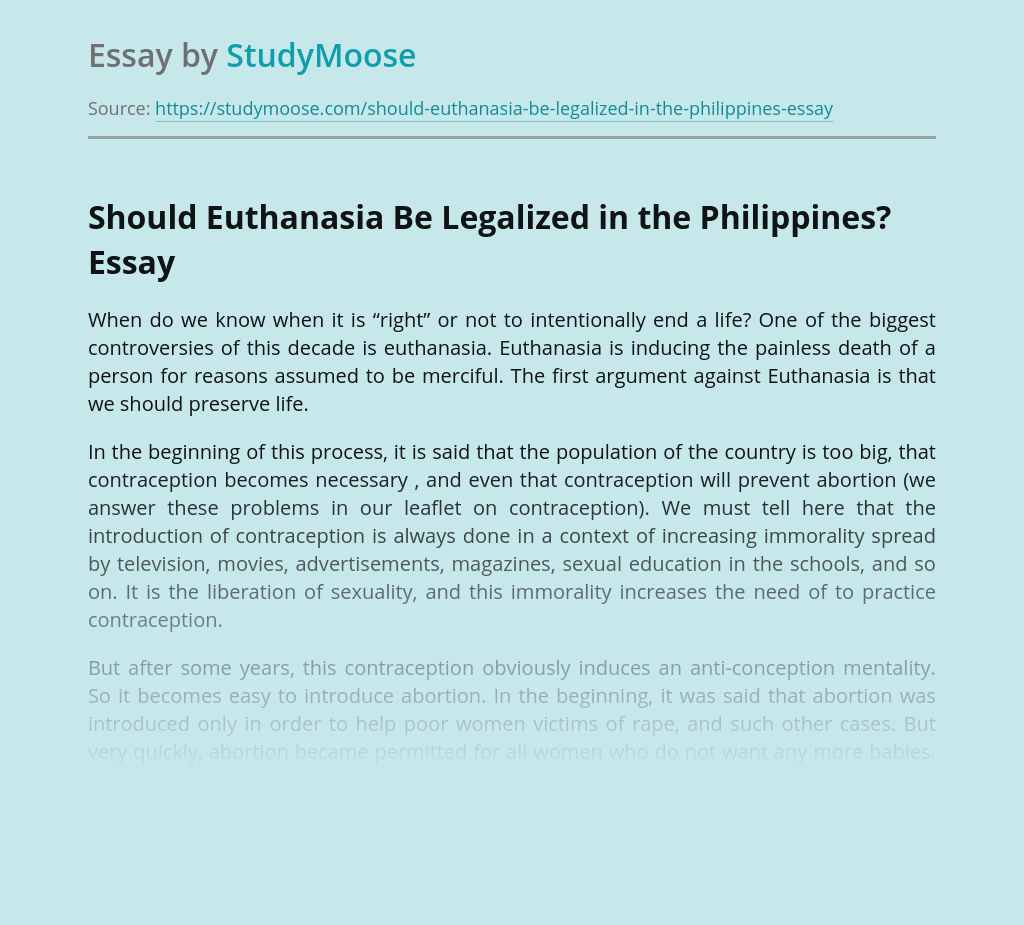 The Poem "My Final Farewell"

Mi Ultimo Adios or My Final Farewell is a poem written by our national hero, Dr. Jose Rizal on the eve of his execution on Dec. 30, 1896. When Jose Rizal walked from his prison to the place of his execution, he not only walked proudly for himself, but he planted the seeds of pride...

View sample
Advertising Board of the Philippines

The Advertising Board of the Philippines, also known as Adboard is composed of eight national organizations involved in advertising that are unified together to uphold the progress of Philippine advertising through self-regulation. Being the umbrella organization of the advertising industry, its mission is to practice world class advertising along with advocating professional ethics through responsible...

Individuals have been aspiring for a progress in their country. With this kind of mindset, a nation will be able to embrace prosperity. On the other hand, the Philippines still remains to be poor even though we, Filipinos, have been longing for its progression. We have this disease called crab mentality that is one of...

View sample
Masculinity in the Philippines

In the imperial age, the military shaped society to suit its peculiar needs. Modem armies are complex, costly institutions that must ramify widely to mobilize the vast human and material resources their operations require. Since the armed forces demand the absolute obedience and, at times, the lives of ordinary males, the state often forms, or...

View sample
Who and what made Rizal our foremost national hero: Reaction Paper

Evaluation of the Group Renato Constantino, wrote the Veneration without Understanding for him to convince Filipinos having doubts on Rizal being the national hero. At the very beginning, he immediately compared the Philippine hero to many nations in which he explained their heroes were leaders of the revolution and ours was adjacent to such revolution:...