Should Gambling be Legalized Or Not?

Since the negative consequences of gambling surpass the positive ones gambling should be banned. In fact, there are several reasons that indicate why gambling shouldn’t be legalized comprising debts issues, depression, addiction, and political corruption. Thus the loss accompanying gambling way more exceeds the financial profit that an individual or a group of people might gain. Therefore I strongly disagree with the legalization of gambling. Gambling should be banned because it might turn into an obsession and consequently lead to debts very quickly.

Turn in your highest-quality paper
Get a qualified writer to help you with
“ Should Gambling be Legalized Or Not? ”
Get high-quality paper
NEW! AI matching with writer

Basically the loss associated with gambling far outweighs any profit, since one is more likely to loose the money he or she has invested. Likewise, legalizing gambling can even affect young children. Thus since gambling might supply a person with great number of money easily; young children may follow the incorrect path quickly. In fact the expense of gambling obsession alone way more surpasses profits. Thus not only adults are becoming addicted to gambling but also young children.

For instance, according to a recent Reader’s Digest article “Today, more kids gamble than are involved with drugs, smoking or drinking” (Mar.2001, p. 160).

Yet, even though it is prohibited for children to play gambles, reports indicate that in states such as Texas and Louisiana about one-third of adolescents buy tickets. Likewise such gambling addiction might eventually lead to depression as well. For instance if one lost all his money by investing it in a game of chance, depression issues might arise. Another reason to prohibit banning might be due to the fact that gambling might turn out to be a moral issue.

Citizens should be stimulated for better things rather than gambling.

Gambling unquestionably may cause a lot of income, but this is matter of luck. Yet, legalizing gambling will make people loose their money in hope of earning money the easier way. In fact, allowing gambling might even entice individuals who never gambled before. Thus, people gamble for diverse reasons. While some hope to gain a great number of money with little effort, others, especially problem gamblers, seek pleasure and excitement by games, and so feel a heroin-induced haste when long tension, anticipating ones game’s outcome, is announced.

In fact, some gamblers value this such state of excitement more than the money they might win. Likewise, some claim that gambling is just a hobby as is regarded as a form of entertainment. Thus if everyone started to gamble and give up their occupations, the world would eventually need people to work in serious jobs other than gambling. Furthermore gambling might lead individuals to instigate criminal actions. In fact many people who became addicted to gambling fail to reason shrewdly before taking any decision.

This happens because their obsession forces one to invest a great number of money in gambling. Accordingly, this might make one reach a stage in which he or she cannot halt himself or herself from risking money or possessions. Consequently, gambling might lead to debts as mentioned before. Likewise the ones who usually start gambling, are the ones who give up their work, ruining their lives. Thus, gambling should not be legalized but rather should be banned. Accordingly through the use of edicts and rules gambling might be hindered.

Furthermore punishments should be implemented on the ones who gamble which in turn might reduce the number of people who gamble. So basically through the use of order and penalties, gambling might one day be reduced or even stopped.

Should Gambling be Legalized Or Not?. (2017, Apr 27). Retrieved from https://studymoose.com/should-gambling-be-legalized-or-not-essay 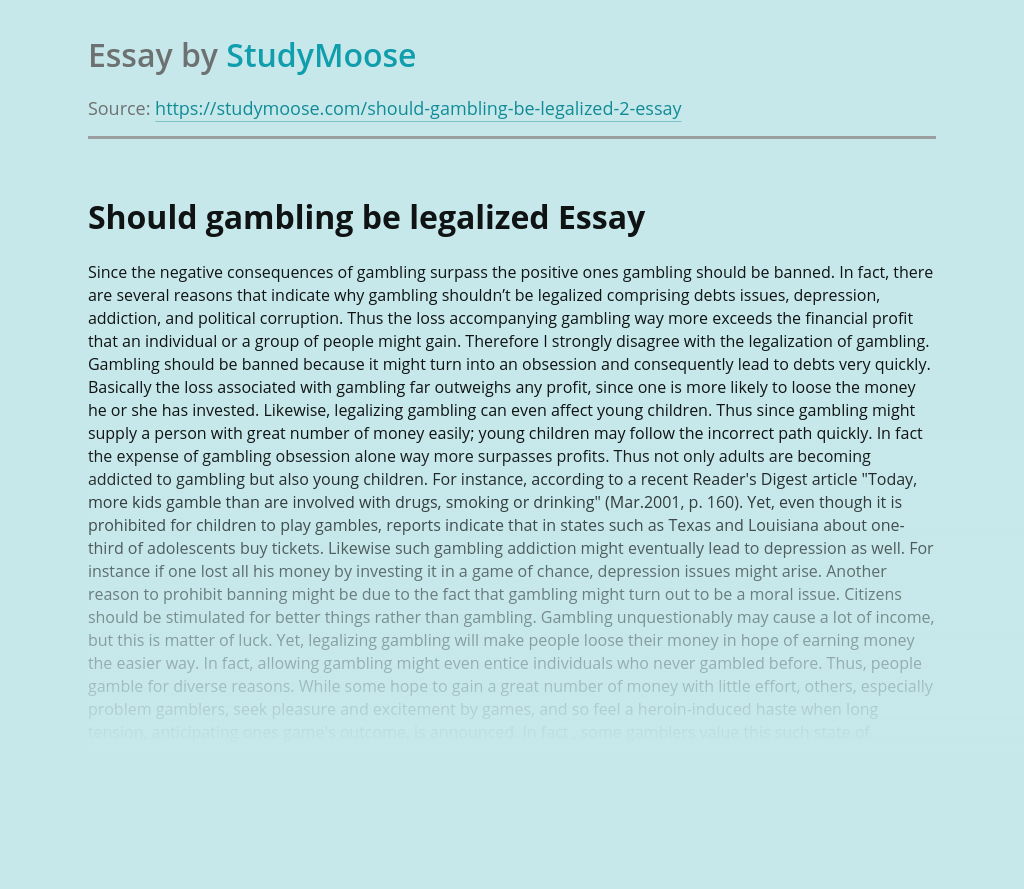 Turn in your highest-quality paper
Get a qualified writer to help you with
“ Should Gambling be Legalized Or Not? ”
Get high-quality paper
Helping students since 2015
Stay Safe, Stay Original