The twenty-first century is in full swing and technology changes almost daily. This increase in technology, however, is a double-edged sword for many employers. New computer and internet capabilities allow for faster production, more efficient order processing, online banking, computerized record keeping and even allows employees to work from virtually anywhere with smart phones, mobile hot spots, and wireless internet. At the same time, new ways of working require employees to have computers and internet access at work. Now employers are concerned with internet abuse and they are finding themselves in the highly controversial position of wanting to monitor internet use.

Don't use plagiarized sources. Get your custom essay on
“ Should Employers Monitor Internet Usage? ”
Get custom paper
NEW! smart matching with writer

There are three reasons why employers should monitor internet use: cyberslacking, legal liability issues, and bandwidth costs.

The biggest reason so many employers are considering internet monitoring is cyberslacking and its impact on employee productivity. Cyberslacking is a term used to describe internet use for personal reasons during work hours (Vitak, Crouse, & LaRose, 2011).

While many employers allow and even expect their employees to make personal use of the internet from time to time, recent studies have shown that as much as 51% of an employee’s time on the internet is personal use.

This severely impacts company productivity (Johnson & Rawlins, 2008). While reports vary, the cost of lost productivity could range as high as $178 billion annually (Vitak, Crouse, & LaRose, 2011). Perhaps most interesting is the fact that even employees admit that internet use decreases their productivity when surveyed (Greenfield & Davis, 2002). All of this decrease in productivity can damage a company’s reputation for quality service and customer satisfaction, a factor that could impact revenue during an already difficult economy.

In addition to cyberslacking, another reason to monitor internet use is the legal liability issues that can arise. Employers are facing embarrassing legal actions stemming from internet abuse in ever-increasing numbers as they are held accountable for what their employees do online on company computers. Inflammatory emails have resulted in defamation charges, pornography on computers and lewd and suggestive emails have brought sexual harassment lawsuits, and the seemingly accidental transmission of sensitive information has resulted in legal proceedings over the breech in security (Johnson & Rawlins, 2008). The New York Times, Xerox, Dow Chemical Company, and Merck and Company are just a few of the many employers who have disciplined or fired employees for internet abuse (Young, 2011). This brings additional problems and additional costs as prior employees sue for wrongful termination.

Finally there is the increased bandwidth costs and associated technical problems that come with internet abuse. Consider what happened at Lockheed Martin for example. An employee sent 60,000 coworkers an email, e-receipt requested, to inform them about a national day of prayer. Their email system was so overloaded that a Microsoft rescue squad was needed to correct the gridlock. The system was down for over six hours and cost the company hundreds of thousands of dollars (Johnson & Rawlins, 2008). Misuse of the internet can seriously impair network resources resulting in diminished system responsiveness, malfunctions, and even overloads that shut down the entire system. This additional strain results in the need for increased bandwidth for a faster system plus additional hardware needed to accommodate escalated network traffic (Young, 2011). Furthermore, there is a greater susceptibility to computer viruses and their accompanying problems when employees visit a variety of websites for personal reasons.

There are a few reports that indicate personal use of the internet may actually increase production as well as alleviate stress. In addition, employees are arguing that internet monitoring is intrusive and a violation of privacy. All of this has only served to fan the fire. Meanwhile, cyberslacking, legal liability, and bandwidth costs are reason enough for companies to take action. Monitoring systems, in conjunction with training programs to enhance awareness and an enforced IAP (Internet Access Policy) can significantly reduce non-work internet use, saving employers billions of dollars. 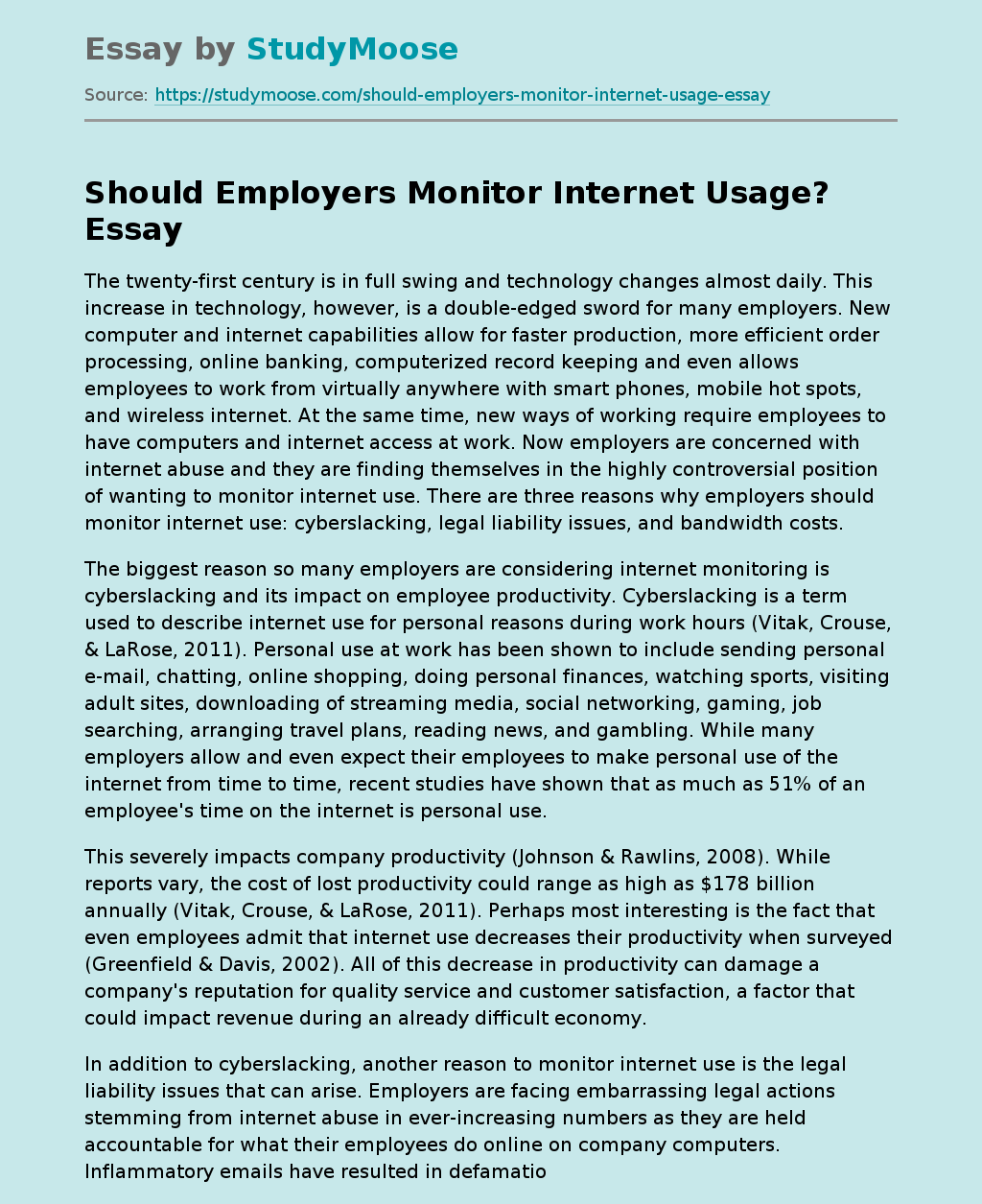