Should College Student-Athletes Be Paid?

One of the biggest arguments these days in the sports world is should college athletes be paid or not. To preserve the competitive nature and the “college environment” student athletes should not be paid. College athletes go to school for a reason, education. Universities or colleges should not have to spend money on top of giving the students an opportunity to set up their future. With natural born athletes, they already have a competitive drive within themselves so monetary supplement would not be an issue.

Don't use plagiarized sources. Get your custom essay on
“ Should College Student-Athletes Be Paid? ”
Get custom paper
NEW! smart matching with writer

Colleges or universities are a pathway for a bright future to any young man or woman.

One reason college’s athletes should not be paid is that they receive money from scholarships and basically go to school for free. Hypothetically speaking, a high school student who is very good at football received several offers (scholarships to play at their school) from very big name schools. He accepted an offer to a large university and now, is the starting defensive end for them.

He goes to school, gets his education for free and also gets to play the sport he loves. Statistics involving total scholarships and revenue to the schools seem to be similar as the revenue feeds the scholarships. Playing for such a big school in football some people may say that scholarship money isn’t enough because tuition is small compared to the money they bring in. The money that they bring in goes towards their scholarships, food, and clothes they wear. With all that is earned, a big chunk goes toward them and the free education and traveling.

Some athletes don’t get as much attention as ones from bigger schools. Athletes from smaller schools still receive attention and money, just not on as large of a scale.

They go to school to be student-athletes, with their role as a student coming first. If the athletes were being paid to play there, it would turn into a job for them. Students-athletes get scholarships to get a free education and should focus on that and becoming successful. One could argue that anyone on that high of a level playing a sport should be paid. Their schedule and what they go through day in and day out is like a job and the workload on their shoulders is tremendously large. Being a college athlete myself, having a full time schedule and playing a sport comes as a second nature. If you are driven and have the mindset to succeed, it will happen. Saying this, it doesn’t mean student-athletes all have that mindset; it might just mean some of them just aren’t ready or willing for what college sports bring.

Going to school for free and setting up their future through education and sports is more valuable than being paid. Getting the chance to go to school while playing sports is such a good thing for a person’s future. It’s a double positive. A college athlete’s future can go either way, if not both ways. It can go through the education aspect, which if the sports does not turn out for them, they could fall back on to their education. If a college athlete is remarkable and has the chance to go to the big leagues or the pros then it’s very good for their future. The school sets these up. For their future or not, they bring in money to the school and all that gets awarded in scholarship money.

Scholarship money is the least that the school can do for them. The school is giving them a free education. It’s a pathway for their future for free, while other college students who do not play a sport end up in debt coming out of school. On top of getting a free gateway for their future through education, they also are getting the opportunity to try to make it big through the sport that they play. If the sport does not come through, then they have the education aspect to fall back on. A student with a degree is estimated to earn about 50,000 a year and professional athletes on average make 200,000 a year.

To reserve the competitive nature and the “college environment” student athletes should not be paid. As a sport driven athlete, it is the adrenaline rush that fills the need for any monetary supplement. A college athlete should want to be educated and want the best for his or her future, either through education or through sports. A person’s want and drive to better himself should be satisfied with a scholarship. Getting a free education and getting to play a sport on top of that should make ones life a dream. They get to wake up everyday knowing that they are getting the opportunity by setting their future up through sports and education.

Should College Student-Athletes Be Paid?. (2016, Aug 14). Retrieved from https://studymoose.com/should-college-student-athletes-be-paid-essay 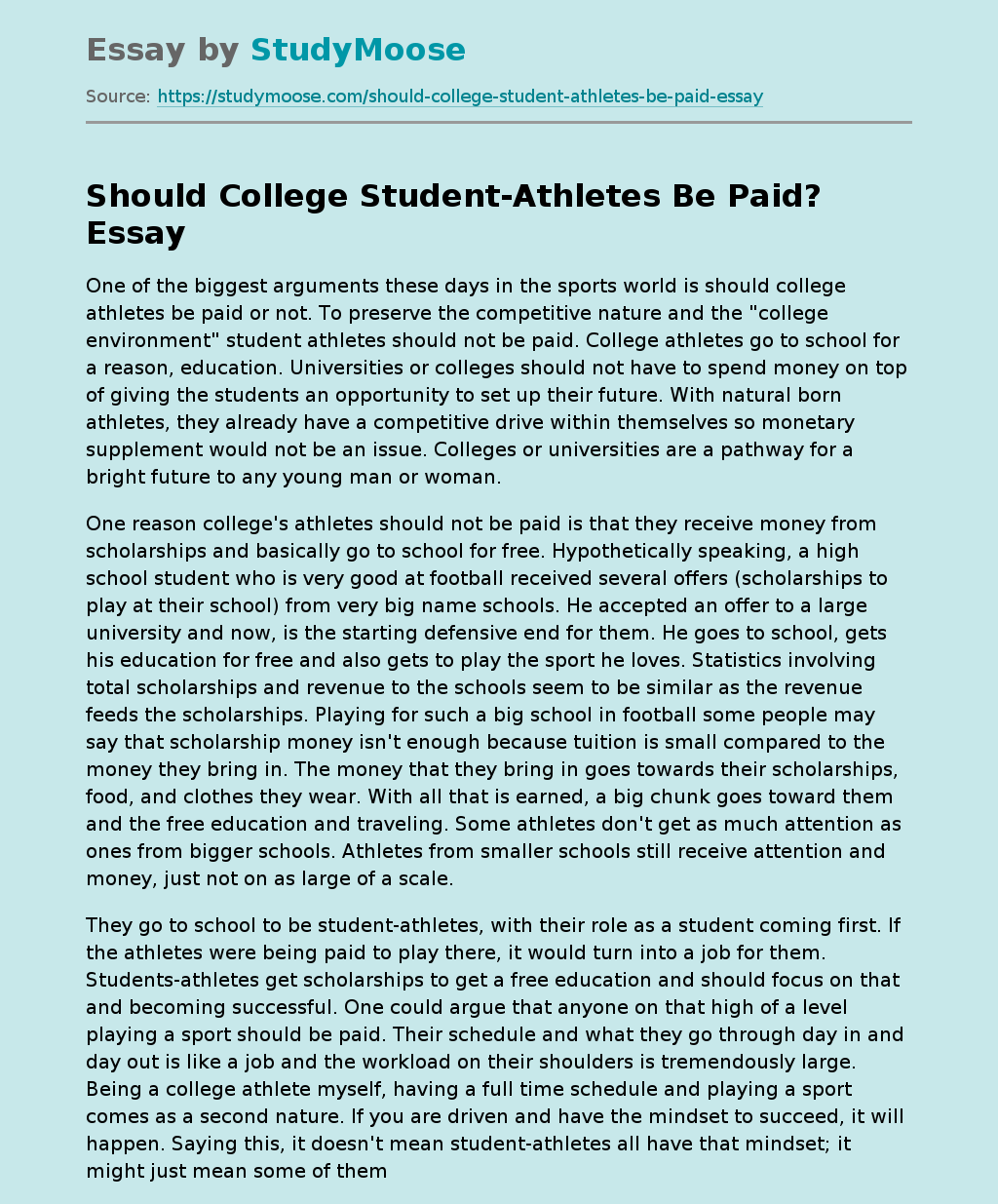