Short story "The Lady or the Tiger"

The young man “turned, and with a firm and rapid step he walked across the empty space. Every heart stopped beating, every breath was held, and every eye was fixed immovably upon that man. Without the slightest hesitation, he went up to the door on the right, and opened it.”

Now what was behind the door may be a surprise. The princess loved the man very much, did she not? She loved him so much that she would only want the very best for him, would she not? Maybe though, somewhere, in her semi-barbaric self, the princess only wanted what she wanted and nothing more.

Don't use plagiarized sources. Get your custom essay on
“ Short story “The Lady or the Tiger” ”
Get custom paper
NEW! smart matching with writer

So keeping all of this in mind, I will say that in fact the princess did only want what she wanted. In making that very slight, almost innocent, gesture to the right, she was condemning her lover to death as to reserve him for herself and keep him from loving another woman. For she knew that the tiger lay behind the right door and that the lady lay behind the left.

Immediately after opening the right door only a slight crack the man knew that the tiger was there and tried to quickly close the door, but it was too late. The tiger, seeing freedom and dinner, leapt forward and flung open the door with such force that it hurled the man back.

Although some may think that at this point the man’s life is over, this particular man was always prepared for anything to happen.

Before he had been sent away to the king’s court he had won the favor of a guard who secretly slipped him a knife. So before the man was thrown from the door he was already reaching for his knife. The tiger immediately, after seeing his prey, leapt high into the air above the man’s head so as to pounce on him and in effect-kill him. But we must remember that this is a very different situation just like the accusation of the man. So, he stabbed the tiger right in the eye, killing it instantly.

As the crowd saw what had happened they were at first shocked, for this had never happened before. But the king started to applaud the man, and so followed the spectators. The man stood up, dusted himself off, and gazed upon the princess. The king declared that the man be wedded to his daughter right then and there because he had proven himself more than worthy.

Short story "The Lady or the Tiger". (2016, Jun 27). Retrieved from https://studymoose.com/short-story-the-lady-or-the-tiger-essay 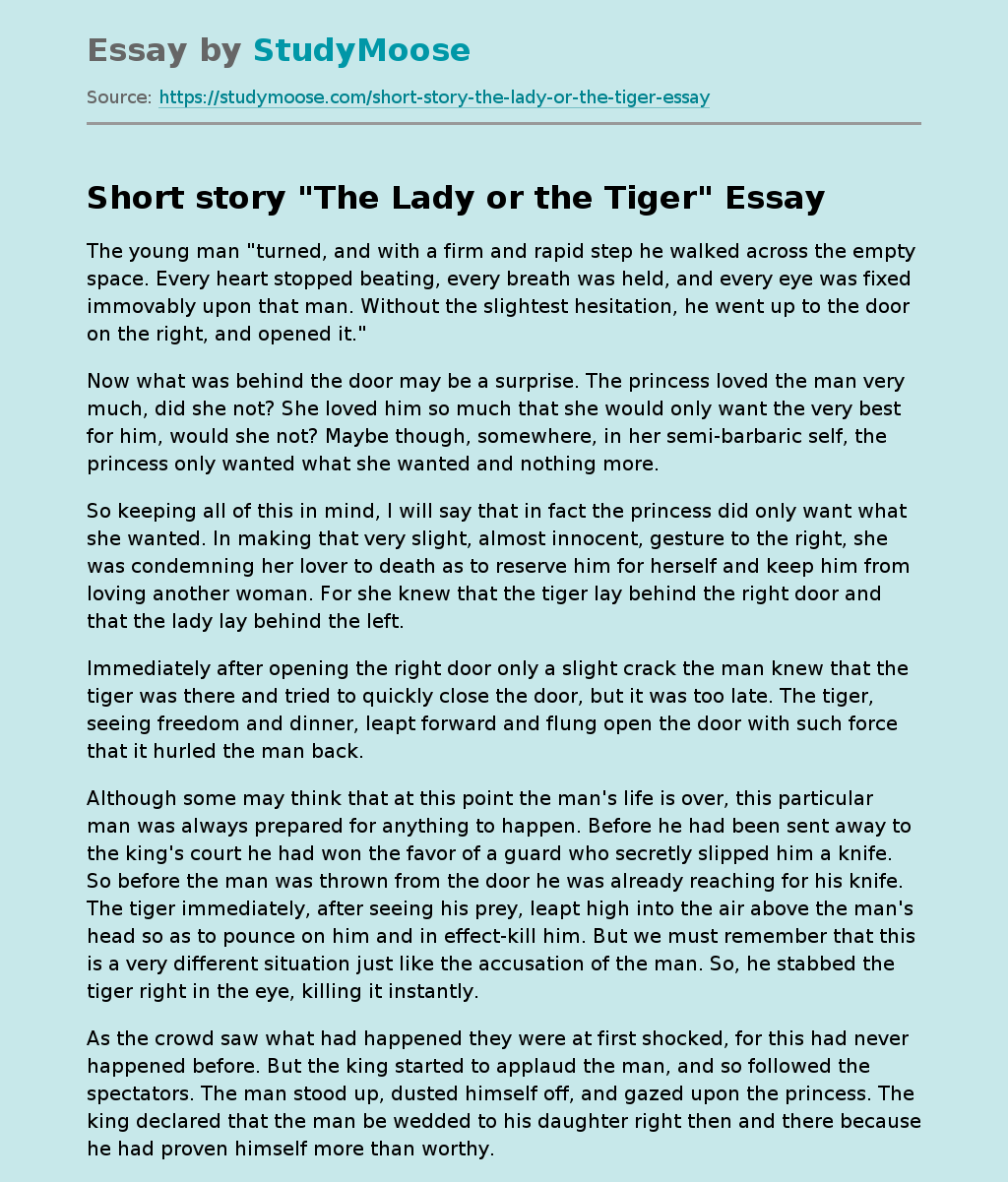