Setting comes in many different forms. Barbara Kingsolver deftly incorporates both socioeconomic setting and geographical setting in The Bean Trees, her first novel. Her use of setting in this manner contributes to the novel in countless ways. Taylor Greer, a narrator with a humble past, could have easily been labeled as a country simpleton. However, her journey across the United States leads her to some unique locations which unveil her ability to think deeply and appreciate the world around her. As she finds a new home in Tucson, she is able to grow and become her own individual while simultaneously using her past to make valuable connections with people.

Don't use plagiarized sources. Get your custom essay on
“ Setting Comes in Many Different Forms Barbara Kingsolver ”
Get custom paper
NEW! smart matching with writer

In the first chapter, her humble childhood roots seem as though they might stifle her potential to do something worthwhile in her adult life. What Taylor and the reader don’t realize at first is that her origin in the rural Pittman County would allow her to connect with Lou Ann in an amazing way.

“‘I’m just a plain hillbilly from Nowhere . . . I’ve got nothing on you, girl.’ Lou Ann hid her mouth with her hand . . . I could see that she was smiling. ‘Come on, what is it?’ ‘It’s been so long,’ she said, ‘you talk just like me.'” (Kingsolver, 76). Taylor and Lou Ann go on to become thick as thieves and move in together. An aspect of Taylor’s history that she never thought would benefit her allowed her to make a best friend.

Pittman County, which is described as having a low education level, seems as though it might set up a character to have simple, if not incorrect, language and little depth to her thoughts.

On the contrary, Taylor has her own distinctive eloquence and idyllic voice that shines through when she is surrounded by nature. When her group of newfound friends in Tucson embark on a short trip to Lou Ann’s favorite destination, Taylor’s commentary is unique, childlike, and poetic. “We’d come to a place you would never expect to find in the desert: a little hideaway . . . rocks sloped up out of the water like giant, friendly hippo butts. A ring of cottonwood trees cooled their heels in the wet ground, and overhead leaned together, then apart, making whispery swishing noises.” (Kingsolver, 91). Taylor’s abundant use of simile gives her an admirable and youthful quality that the reader learns to know and love as the novel progresses. Her point of view is consistently refreshing as she manages to make every landscape seem like paradise, even in the arid and seemingly lifeless deserts of Arizona.

Taylor demonstrates this positive outlook as the book progresses. After a devastatingly long drought in Tucson, Mattie takes all her friends out to smell the first rain. The reader gets to see through Taylor’s eyes as she narrates a vivid landscape described with an abundance of unlikely analogies. Having never left Kentucky in her whole life, she manages to create intricate stories from every aspect of her surroundings. “The whole Tucson Valley lay in front of us . . . like a palm stretched out for a fortuneteller to read, with its mounds and hillocks, its life lines and heart lines of dry stream beds . . . like a huge blue-gray shower curtain being drawn along by the hand of God.” (Kingsolver, 161). Taylor’s ability to see such beauty under any circumstances is one of the qualities that makes her such a lovable character. She is blunt and down-to-earth in her dialogue, but the reader forms a connection with her through her vivid visual descriptions.

Barbara Kingsolver’s use of setting and character development in this novel add depth and complexity to a seemingly straightforward character and allow her to use her past to grow as a person. 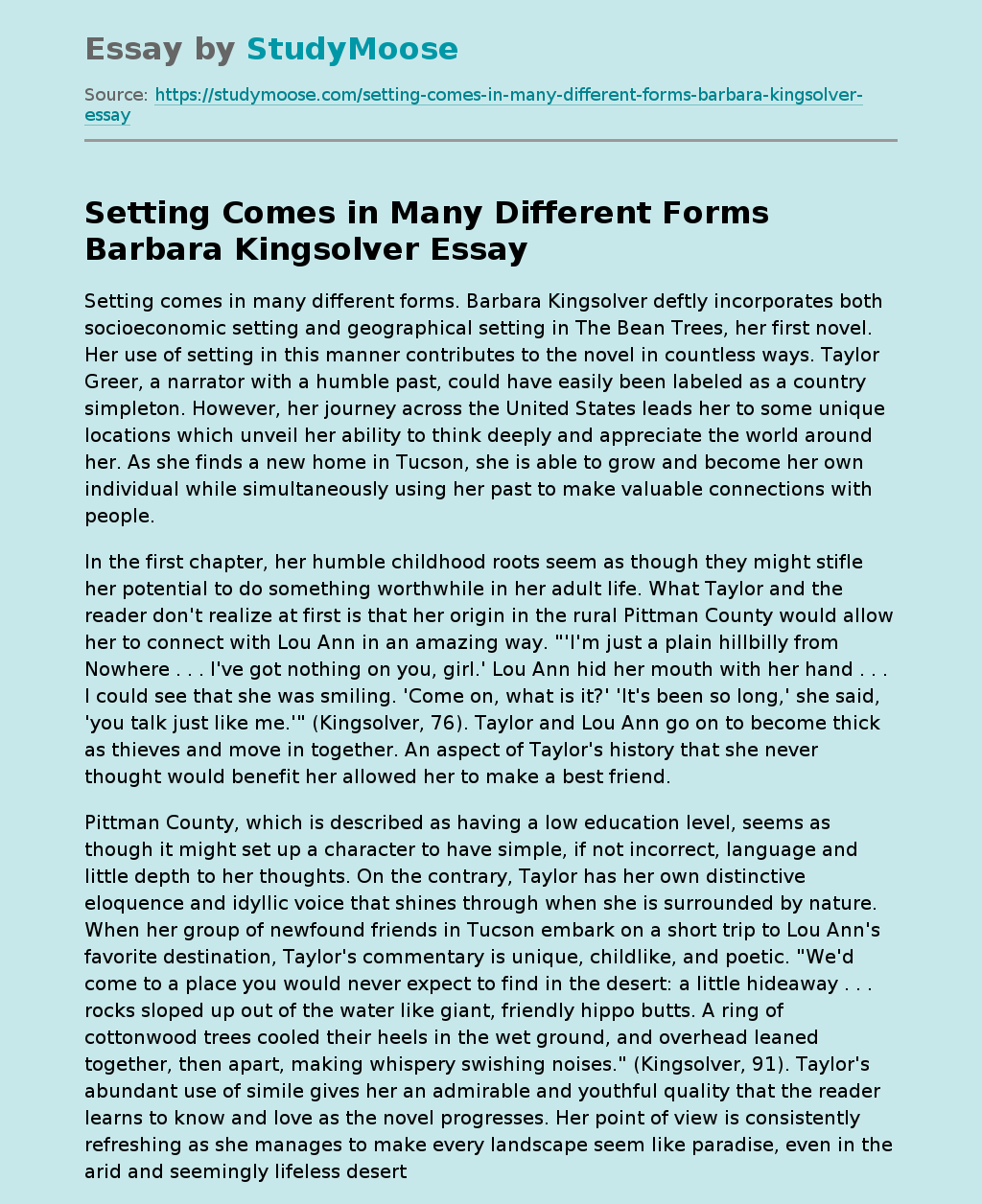