In a blink of an eye, a piece of America’s heart came tumbling to the ground on September 11. Before we knew why and how, two symbols of our great nation and thousands of lives were gone. As we begin to rebuild and recover, we must decide what is more important to us as a country, security or freedom? House Minority Leader Richard Gephardt (D-MO) has already conceded, “We’re not going to have all the openness and freedom we have had.

Don't use plagiarized sources.
Get Your Custom Essay on Security Vs. Freedom Just from $13,9/Page

” Senate Minority Leader Trent Lott (R-MS) takes an even harder line, saying, “When you’re at war, civil liberties are treated differently.”(Pena) At the same time you hear people calling to keep their freedoms, they are asking for more security.

What kind of securities are they looking for? Airports are definitely at the top of the list, since the attacks on September 11 did occur as a result of poor security at airports. The federal government proposes to step in and take over as airport security all over the country.

They want to give the security guards the right to search everyone that goes into, and possibly out of, the airport. They also want to include an armed federal marshal on most commercial flights. They have already called up 50,000 National Guard soldiers for ” among other things ” “air and ground security, port security, and civil affairs.”(Pena) This will hopefully deter any more attacks on the nation’s airplanes or airports. Measures such as these make our free country look like a police state.

Since the attacks people have been on heightened alert about other terrorist attacks such as chemical or biological attacks. These include the setting off nerve gasses such as VX or sarin and the threat of unleashing diseases such as small pox or anthrax. To prevent attacks the government has temporarily suspended the use of crop dusters and is asking many pharmaceutical companies to manufacture more antidotes and vaccines for various diseases that can be weaponized.(Bjerkie 42) It has also gotten to the point already where people are supporting “terrorism” bills that will to allow the government greater power to tap phone lines, listen in on cell phones, and read peoples e-mail.(Thomas 34)

Many people believe that by giving the government this power, that they will have an upper hand when it comes to preventing terrorist attacks on our nation and around the world. The last security that is being taken is road blocks trying to prevent terrorist from either transporting deadly material or just trying to get somewhere in our country. These are all very good and sensible securities that should be taken to defend Americans, but they come at a high price. Imagine waiting for hours in traffic just to go to work in the mourning.

There are many freedoms that could be lost in the coming weeks and months. One of the most important freedoms at risk is a basic freedom stated in the Bill of Rights. Amendment Four states that no one should be subject to unjustified searches and seizures. But this is what they are doing at airports now. Everyone must be searched, even if they pass through the metal detector without setting it off.

Not only is this a violation of one’s personal rights, but it is also time consuming. To personally check everyone that goes into an airport takes time and money. Instead of getting to the airport an hour before a flight, passengers must arrive there two to three hours before their flight. Most of that time will be spent waiting in security lines. With all this beefed up security, someone is going to have to foot the bill. Guess who that’s going to be? That’s right, the consumer.

History amply demonstrates that in times of war, government grows and liberty yields. America’s new war on terrorism already shows signs of that as Attorney General John Ashcroft petitions Congress for more power to wage the war. (Kopel) Yet the principal business of government is precisely to wage war on those who threaten our liberty and security. There is a need to step up security. When something like the September 11 attacks happen, you know that somewhere, someone has just dropped the ball, big time. Something should be done, nothing like that should ever happen on American soil. We must also remember that nothing is fool- proof. That if someone wants to blow up an airplane, they are going to find a way. Sadly it is beginning to look more and more like we are still going to have to give up some of our freedoms due to the attack on September 11, so you still have to ask yourself what’s important to you? 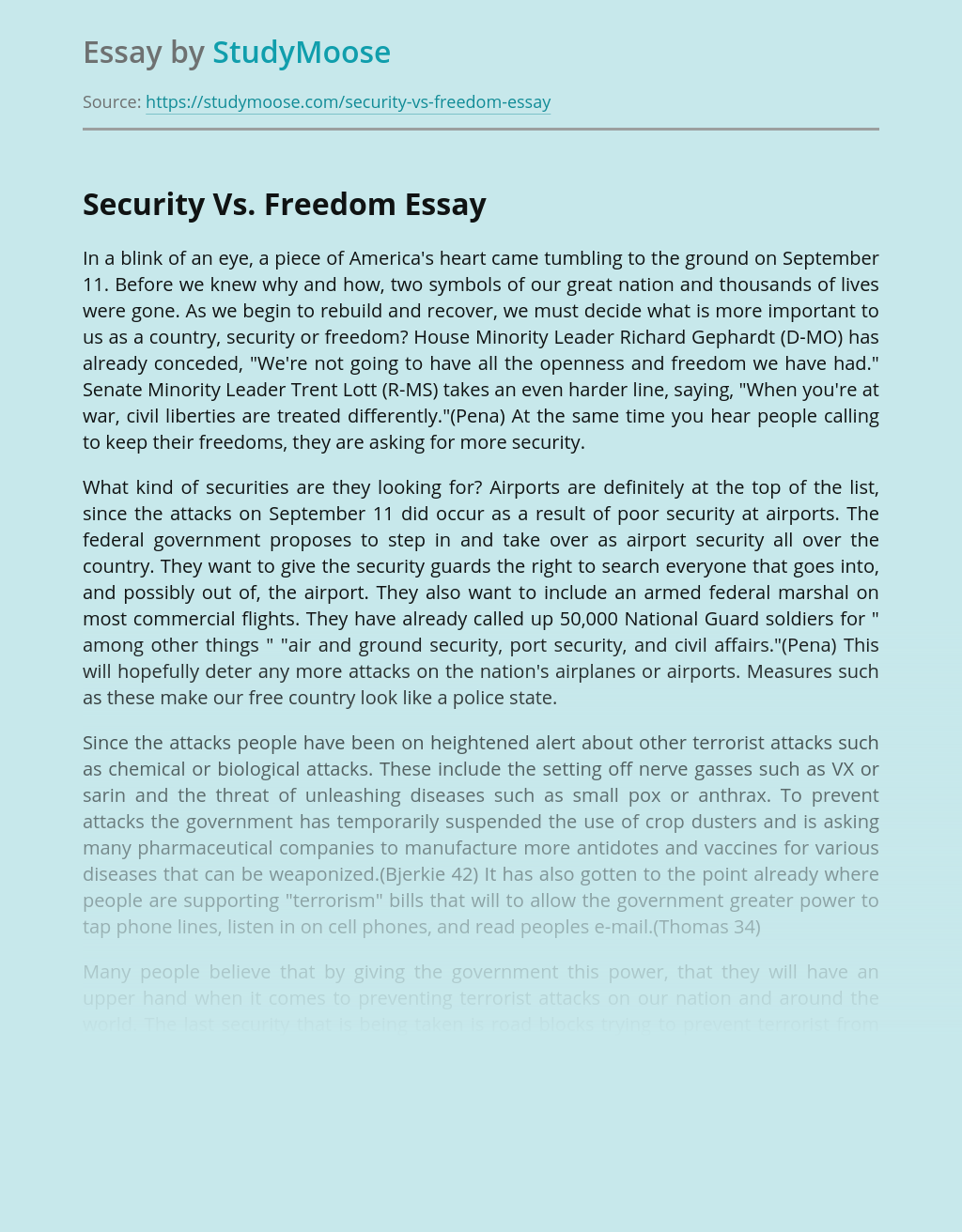 Speech One is to be an Informative Speech. In this speech your goal is to inform your audience as to the details of the topic suggestion below. Being an Informative Speech you are not asked to discuss the merits of the program. Your task, as is consistent with an informative speech, is to provide your...

Abstract The ChoicePoint data breach occurred in 2005. This insider data breach brought to light how a company can still be vulnerable to having data stolen from its databases even without any type of hacking of their system. By not properly vetting request for new accounts and request for information led to the theft of...

As an organization grows so must the security, and it has to be on the top of the list. When considering what type of security to choose, either proprietary or contact, they need to look at the value of the organization? This value within the organization will need some sort of protection to deter theft,...

2. Is Nmap able to identify the operating system running on each system? Is there any Nmap feature that can be used to guess the OS of a host? Explain your answer. Using the ports that are open and the probable services running on those ports, determine what operating systems are running on the devices....