“Se habla Espanol,” a memoir written by Tanya Maria Barrientos, was published by Borderline Personalities: A New Generation of Latinas Dish on Sex, Sass & Cultural Shifting (HarperCollins, 2004). Barrientos is a Guatemalan born Latina that was brought to the United States as a child, but failed to identify with her origins and saw herself as an American girl who struggled as an adult to regain her identity and acceptance as a Latino woman. Barrientos was brought to the United States at a very young age by her parents who immersed her into the American culture by speaking nothing, but English.

Don't use plagiarized sources.
Get Your Custom Essay on Se habla Espanol by Tanya Maria Barrientos Just from $13,9/Page

This was to serve the purpose of blending her more into her new society and thus, ensuring her success. Barrientos describes how Americans during that time were not culturally tolerant and expected foreigners who entered into their country “to drop their cultural baggage at the border” (2004). Barrientos believed that speaking Spanish translated into being poor, waiting tables at restaurants and cleaning hotel rooms.

In addition, it meant being excluded from school activities such as cheerleading or not having a chance to go to college. Barrientos enjoyed saying “yo no hablo espanol” (2004) to Latino store clerks and waitresses. As a result, it made her feel superior and also made her feel American.

Fitting in with the American society was essential for Barrientos. She stayed away from speaking Spanish because she did not want to be labeled as a Latina. Barrientos was told by her best friends that she did not seem “Mexican” and she took the comment as a compliment. For Barrientos, it did not matter that her parents spoke Spanish and were successful. She stayed away from speaking Spanish because it was important for her to fit into the American society.

When she was sixteen, she told her father she hated being called Mexican because the word was hurled as an insult. As a result, her father realized how she felt about her native culture. That summer, he decided to send her to Mexico City so she could see how beautiful Mexico is and feel proud of it. By the time she graduated from college, Barrientos realized that society had shifted. The nation had changed its views on ethnic identity. Children were told to picture America as a multi-colored quilt and she was left wondering where she would fit in. The Spanish language became the glue that held the new Latino-American communities together. In her quest to re-enter the Latino community and call herself Latina for pride, she decided to take Spanish lessons to learn the language and fit in. By her mid-twenties, Barrientos finally understood that being a proud Latina meant showing the world how diverse our culture can be.

The main purpose of the story was to illustrate the struggles that people from other cultures are faced with when trying to fit into American society. The author’s perseverance is shown by her determination to learn Spanish and trying to fit into the group she was supposed belong to. Barrientos’ determination is clear from the beginning when she says that this is the sixth Spanish class that she signed up for. In addition, Barrientos expects compassion when she alienates herself in the story by stating that she has not met anyone like her or, maybe if there is, they have not admitted to it because they too might be struggling to fit in. Finally, the author states that “when true speakers discover my limitations, that is when I get the look that makes me think I’ll never really belong” (Barrientos, 2011, pg#60).

The genre of this short story can be determined by the fact that Barrientos is speaking from first hand experience. She speaks about her struggles and how she has overcome them. When she was a little girl, she tried to fit in as a true American. In her early twenties, she embraced her culture and background although she struggled to fit in to the Latino community due to the challenges of speaking Spanish. This story is written for audiences with a cultural background that identifies with Barrientos’ background. It could be another person of Hispanic descent or any other race trying to learn the language, accept their heritage and find their place in the American culture and society.

In the beginning, Barrientos immediately immersed into the American culture and the only language she learned was English. She felt superior by telling other Hispanic people “yo no hablo espanol” (2004). At the end of the essay, she realized that she had something that people from other races did not have. First, she embraced her native culture by traveling to Mexico and Guatemala to learn more about the culture. Secondly, she enrolled in Spanish classes, hired tutors and listened to tapes to become almost bilingual. Lastly, she wanted to enhance her talent so she could be considered as an “authentic” Latina. The tone that Barrientos used in this essay is of frustration in not knowing where she belonged in society. She struggled with her identity and spent a lot of time and money trying to find her true self. All she wanted was to claim a rightful spot in the broad Latino spectrum. Her stance was very straightforward without using a tone that was overly upsetting to her audience. She used a few sentences that were very powerful and that was all she needed to get her point and concerns across.

My initial reaction after reading “Se habla Espanol” was of understanding and compassion for Barrientos. Being from a Mexican background and migrating to the United States as a young woman in 1987, I understood and related to some of the challenges and frustrations Barrientos had growing up when trying to be accepted as an authentic Latina. I am a proud Hispanic woman and am always willing to share with others the history and culture of the country I was born in. I highly respect everyone who feels proud of their culture the same way as I do. It is sad that Barrientos’ parents focused only on raising American children and not allowing them to learn Spanish to make sure that they fit into the Anglo society. As a parent, I made sure my children spoke Spanish in their early childhood years. I instilled in them the importance of understanding our culture and to be proud of it. By the end of the story, I admired Barrientos for embracing her native culture, realizing that she should be a proud Latina and for making a great effort to learn Spanish to perfection. 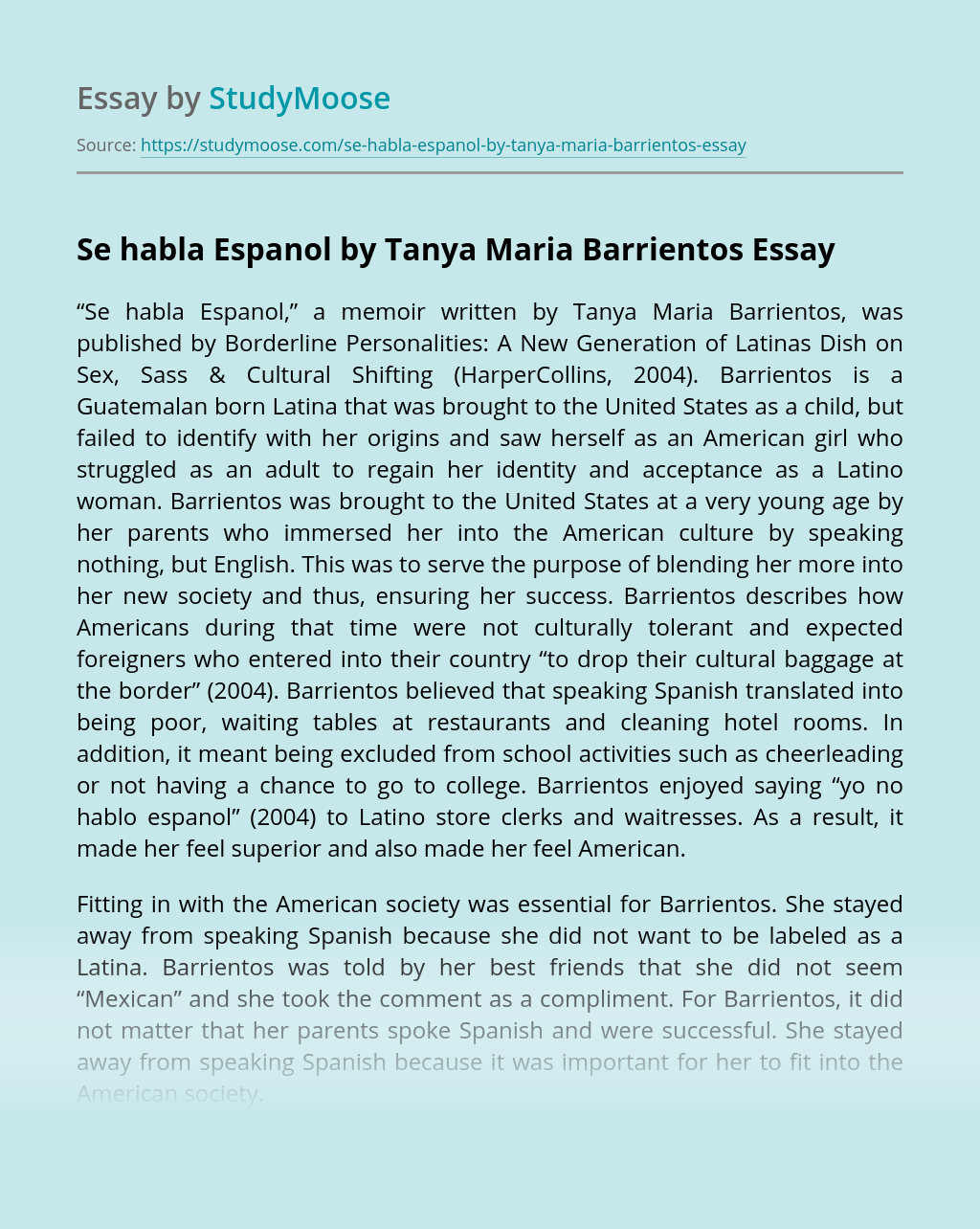 The Body Snatcher is a classic horror by R. L. Stevenson, in the first paragraph, creates images of horror and how the story is based on real people called Burke and Hare, who were grave robbers in Edinburgh in 1829. The story was gripping for start to finish; it was based in an inn near... VIEW ESSAY