Turn in your highest-quality paper
Get a qualified writer to help you with
“ School Environment ”
Get high-quality paper
NEW! AI matching with writer

Our shared vision of the school environment is to have it become a comfortable place where the students can take risks and feel supported. As a staff we strive every day to do our best by our students.

We keep our school clean, well repaired, brightly decorated and reflective of our diversity. Through a grant sponsored by Wal-Mart a free breakfast is given to every student and every staff member.

Proficient in: My School Environment

Our principal has used extra funds to provide the students with both an Art and a Technology teacher. Both of these positions are extras not funded by the school system and must be paid through her discretionary funds. The school community supports all of these initiatives because we want our school to be a place that students want to come to and want to learn in. The majority of the staff prides itself on the school environment and their part in it.

Johnson, Burke & Gielen say that six topics come up repeatedly when polling groups of students: “student behaviors, norms of behaviors, relationships with school staff, learning environment, school safety, and neighborhood environment” (2012, p. 97). Learning environment and neighborhood environment have been addressed in the previous paragraph. I will discuss the other four and talk about some problems I feel exist and ideas I have to provide a solution for those problems.

School safety has been a big concern for almost all school districts across our nation in recent years. It seems barely a few months go by in between reports of students bringing guns to school or school shootings taking place. My school has started several initiatives to combat these school safety issues. Shortly after the Connecticut school shooting we began to have school wide lockdown drills. Four to five times a year we practice what we would do if our school were ever to be involved in an active shooter situation. I have witnessed students’ fear and anxiety levels lower as a result of the knowledge that there is a plan in place and that everyone knows their part of that plan.

Another thing we did at my school in response to the shooting incident was to have cameras installed in all hallways, all stairwells, and outside of the building. All of the cameras are equipped to record and the footage can be viewed live or after the fact on all the administration’s personal computers as well as our building supervisor’s computer. The last and final thing our school has implemented is a video camera door lock system. All the doors in the entire building are locked and equipped with a buzzer and a video camera. The person seeking to gain entry into our school building must looking into the camera, buzz the office and state the nature of their inquiry before the secretaries will buzz the door open. This keeps everyone, staff and students, much safer.

One thing I think we are lacking that I have seen articles about is a way to prevent a trespasser, who has already gained access to the building, from getting access to the classrooms. I have seen at least two different types of inventions that can be used to make a classroom door almost impossible to open. I believe if the students knew we had one of those at our disposal it would make the feeling of safety they have in our staff and our building complete.

Another area that my school has recently been working on is “norms of behavior (Johnson, Burke, & Gielen, 2012). My principal has for the first time since our school opened in 2004 issued a set behavior plan that is the same for all classrooms. It is unified in both how it tracks student behaviors and in how it provides consequences for bad choices. “Researchers have shown that the policies of principals and teachers constitute the healthy school climate and influence the effectiveness of the school” (Gulsen & Gulenay, 2014, p. 94).

We have seen a positive result from their being just one common set of norms for our entire building. The one area of this initiative I feel is lacking is the lack of a reward system. The policies my principal has put into place only allow for students to receive consequences and move down from a high standing. In the last few years that I was in the classroom I used a behavior charting system that the students entered in the middle and were able to move up to the level of “outstanding” without ever having to be moved down. I feel that a behavior system that is only consequence based leaves out recognition for those students that are always doing the right thing.

The fifth area mentioned is relationships with school staff. It is important that our students feel connected to members of the staff. Without that connection the students often lose focus and do not strive to achieve all that they are capable of. Relationships with staff can affect almost everything including the way the students view their physical environment. In one study students identified special places for them in their building and the way those spaces grew to become special had to do with an emotional closeness they felt to people while being present in those spaces (Hemming, 2013). If students could build relationships like that with all their teachers the school as whole would have to therefore become a special place for them. If the school becomes a special place for them they will feel more able to take the risks that accompany great learning.

The last category was student behaviors. In my school district one student behavior that has been effecting the school environment has been bullying. My district has a zero tolerance policy when it comes to bullying. There are many methods of response and reactionary behavior documented in relation to bullying. The area I feel we are week in is the proactive response before the bullying occurs. I believe a strong character development curriculum and a course of action on defining what bullying is and offering students ways to respond and avoid both bullying and being bullied would also help to greatly cut down on this epidemic. School environment does play a role in how students react to bullying. “Sense of affiliation and commitment with the school organization is expected to positively impact one’s likelihood of intervening in bullying situations” (O’Brennan, Waasdorp & Bradshaw, 2014, p. 871).

Last year my school began giving a voice to our students on how they felt on all of these 6 issues. They were given a survey that they filled out anonymously. These surveys were then factored into the teachers’ end of the year evaluations. This upset a great many of our teachers who felt some students wouldn’t understand and that others might answer spitefully. However if the giving of the evaluation causes just one teacher to pause and think before acting, or reach out to a student they might not have otherwise then it has served it’s intended purpose of bettering our school environment. 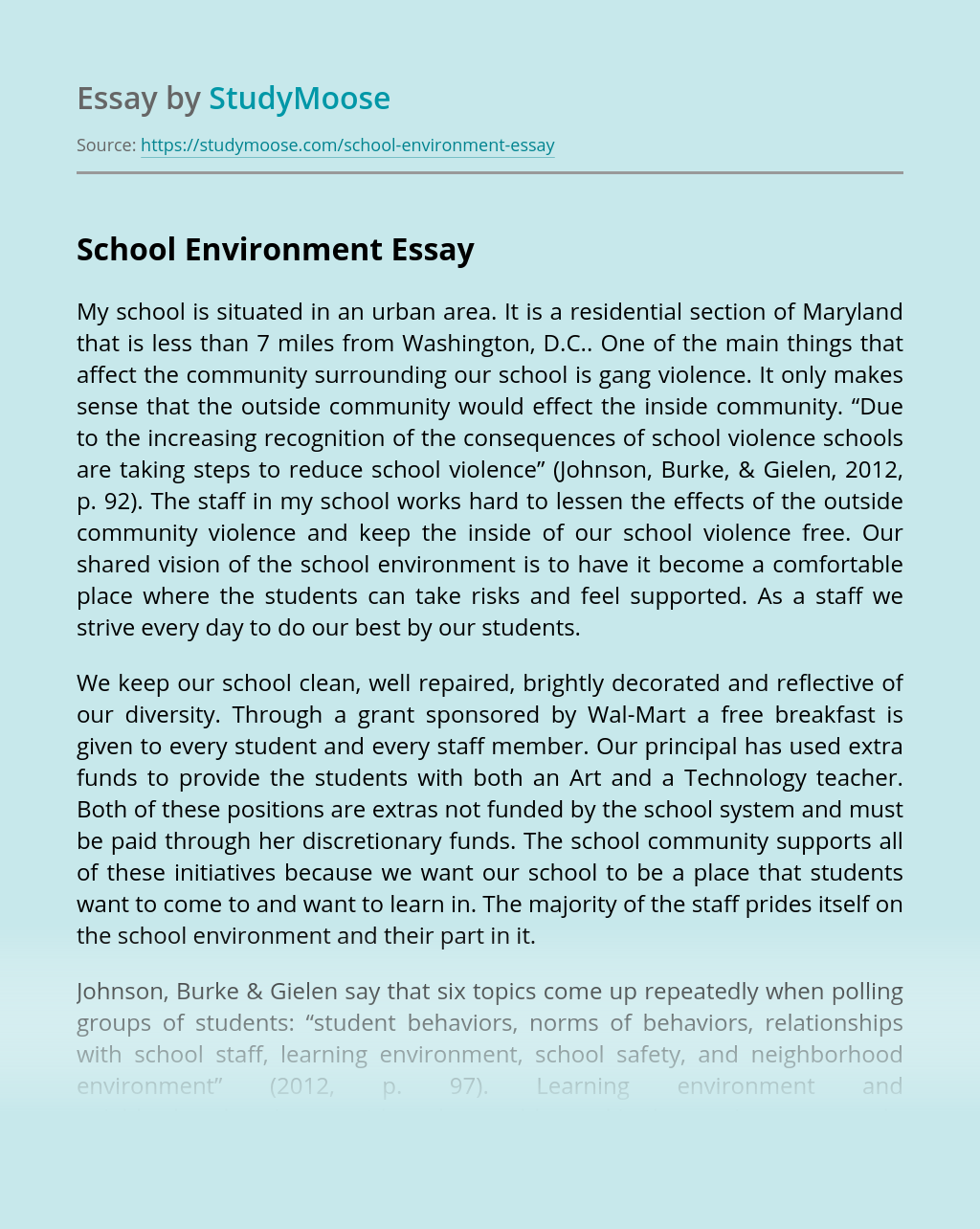 Turn in your highest-quality paper
Get a qualified writer to help you with
“ School Environment ”
Get high-quality paper
Helping students since 2015
Stay Safe, Stay Original