Saving Private Ryan: What impression does Spielberg give of war in the opening 20 minutes of the film?

Powerful, shocking and unforgettable! “Saving Private Ryan” is a war film like no other. It shows the true emotions that go through the minds of the soldiers while they are at war. Directed by Steven Spielberg; starring Tom Hanks and Matt Damon, the film breaks with traditional conventions of the war film genre in the way that it begins with the American flag waving in the wind.

Don't use plagiarized sources. Get your custom essay on
“ Saving Private Ryan: 20 minutes of the film impression? ”
Get custom paper
NEW! smart matching with writer

It then goes of into the images of an old man going into a cemetery and it is showing the pain and grief caused by the war and how deeply upsetting it is for an individual to remember the historical event. Saving Private Ryan” is a war film about the war between the Germans and the allies. It is about the tragedy a family faces when the mother of 4 boys finds out that she had lost three of her four boys.

The main question that this film generates is that is it aright to risk the lives of several soldiers for just one man which could already be dead? Tom Hanks plays Captain Miller who starts off leading a group of soldiers to land on Omaha beach. Later on in the film His mission is changed to a rescue mission to bring Private James Francis Ryan (Matt Damon) back to his mother. Saving Private Ryan” isn’t like the traditional war films. It shows that war isn’t all about victory.

It shows the viewer that even though the soldiers are fighting there, they themselves don’t like being there because they end up loosing most if not all of their fellow soldiers and they don’t know how to cope with it so some of them have an emotional breakdown. The first twenty minutes of the film leaves the audience horrified and disgusted at the violence and slaughter taking place in the war. It also shows the audience the realism of war and makes them want to see more.

It all makes you ask whether or not they made it. The film opens with a piece of music in the background called “Hymn to the Fallen. ” You then see an old man walking to a cemetery. As he is walking you can hear the shuffling of the old mans feet. Then, a violin is added to the drum beat to make the sound sadder which is followed by a long shot of all the graves in the cemetery. After the camera shots of the grave, there are is a close up of the old man which then fades in to become a big close up. As the close up fades into the old man, we can hear waves crashing.

This then takes us into a flashback. The flashback takes us to Omaha Beach. We are shown a date at the bottom of the screen. The sound of the waves crashing continues and we start to hear soldiers shouting instructions. The camera takes us into a landing craft where we see soldiers being shot at. We then see a soldier being sick, which suggests that he isn’t ready to fight and he is scared. The sound of the superiors is drowned by the amount of gunfire and explosions going on which shows you how much carnage is caused because of wars.

We then see a Germans point of view where he is shooting at the Landers. The camera angles that Spielberg uses shows that the Germans could have shot at anyone they wanted on sight. He also shows us that war isn’t a good thing as there are too many deaths. He does this by showing us the Landers that were full of soldiers that didn’t even step on the beach. The sound that Spielberg uses also shows us how frightening war is because the gunshots and bombs make you feel scared as they sound so realistic and make you feel as if they were going to hit you.

There is then an underwater shot of soldiers dying. When this shot occurs, the sound goes much quieter. Spielberg takes this underwater shot to compare how war is to everyday life because we can see a soldier dying but we can hear the nice and calm sound of the water flowing. We are then shown Germans slaughtering men ruthlessly. Bombs are going off and men are blown in the air like flies. In the film there are many camera shots which focus on Captain Miller (Tom Hanks) and his reactions. For example when a bomb is blown up near him, he goes into shellshock.

During this point, all you can hear is a muffled sound. This makes the film more realistic because it shows us exactly how everything happens and how the soldiers feel during a war. We then see a point of view shot of Caption Miller in slow motion in order to focus the audience on the sickening images caused by the war. When he is in shellshock, he spots a soldier who is under fire. This soldier is covering for his life and is eager not to die. This shows that war also makes some people scared for their life.

This is followed by more alarming, realistic and moving images of war. We are shown the bursting of flames and the splattering of blood on the caption’s face. The medics are trying to stop the blood flowing out of the soldier’s bodies. We are then shown a soldier looking for his arm. This is showing us that war doesn’t only effect a soldier mentally, it also effects them physically most of the time. We are then shown a soldier screaming loudly because his intestines are no longer in his body.

We also get Point of View shots showing how the Germans were dominating. Then, we are shown a soldier taking bullets from the dead soldiers to reload his gun. This shows us that the soldier would do anything to get through the hard time he is having and that they haven’t even given him enough ammunition to go out and kill the enemy with. There is also a shock cut of a soldier reading phrases from the bible and killing men immediately after. Throughout this scene, we can hear cries, screams, gunshots and explosions.

These images are shown to show the bad, bloody, brutality caused by war. After the ordeal battle, we start to hear mournful music and we see all of the soldiers that didn’t make it and their bodies being washed away by bloody water. After this point of view shot, we are shown a close up of Caption Miller to show how shock and sad he feels by looking at these dead bodies. Then we are shown a low angle shot of all the dead bodies, which is then turned into an aerial shot in order to show the total debris. The scene ends with a close up of Private S.

Ryan, the brother of Private James Ryan. In this tragic film, Spielberg set out to show his audience not only the victory of war but what it really feels like to be part of it and how the soldiers feel during it. He wanted to avoid making “Saving Private Ryan” like typical war films because they just showed you that one country was fighting against another and they had to come to a winner. He has made a movie which will be remembered by the people because his movie shows all the emotions a soldier is going through and how they feel.

His movie will be remembered because it is original, real and moving. Spielberg’s movie has succeeded in removing the false thoughts about war and has taught his audience to respect those who have fought in the war. film is memorable because Spielberg has changed the way people think about war and has shown that war is very scary and there are many consequences from it and if someone comes back from war they shouldn’t just say well dome they should respect them because they sacrificed their life to help the whole country. 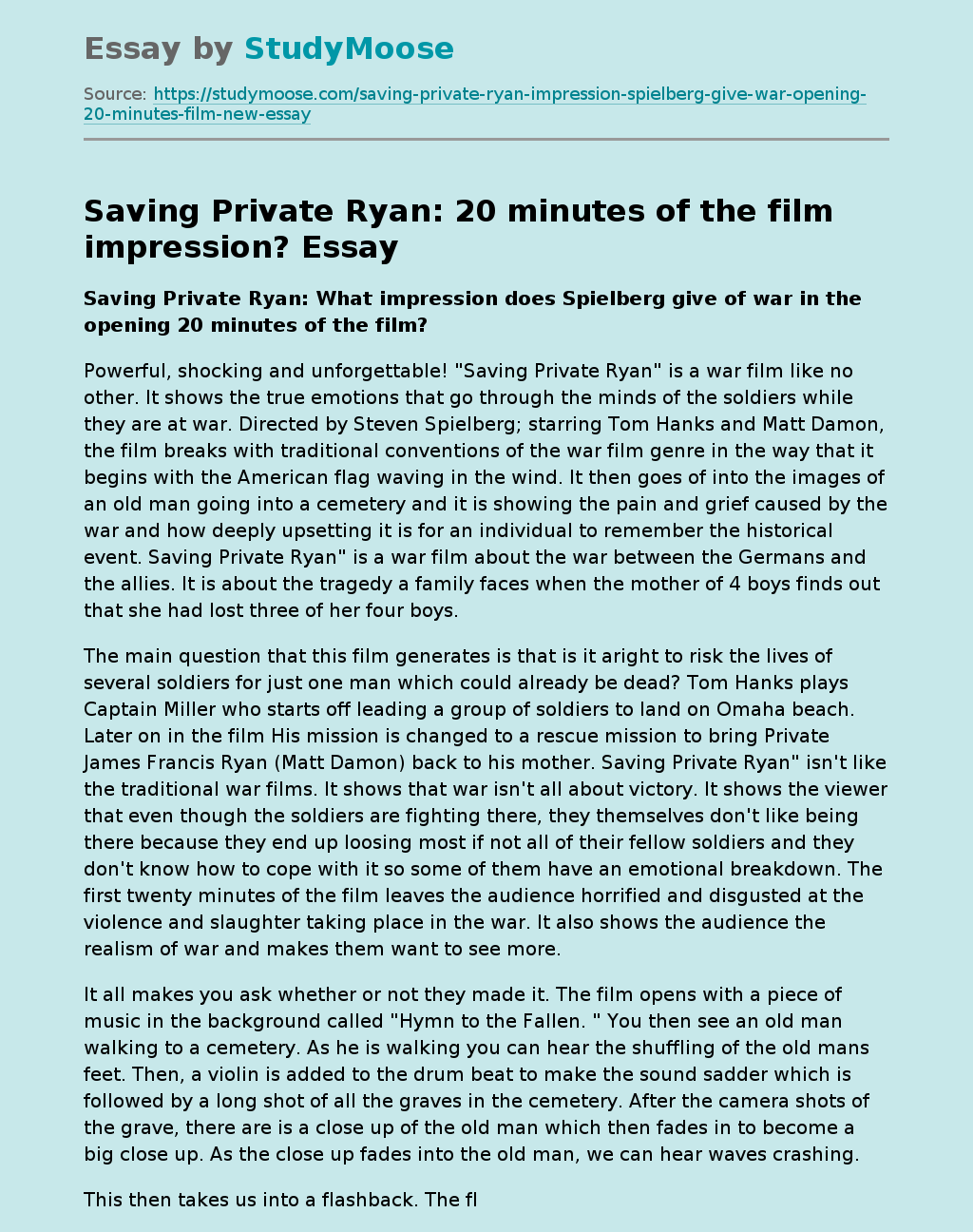