Role of the Supernatural in Julius Caesar

William Shakespeare composed his most famous pieces in an age where the supernatural played a major role in the everyday of lives of peasantry and royalty alike. During that age, commonly referred to as the Elizabethan Age, people postulated that the world held a fragile balance. Rather than simply believing that the balance that existed was restricted to the spiritual world, they speculated that it applied to the laws that prevailed in nature. As a result, the Elizabethans maintained the mindset that the utilization of natural and spiritual implements would protect one from plague and other maladies, both supernatural and secular.

Don't use plagiarized sources.
Get Your Custom Essay on Role of the Supernatural in Julius Caesar Just from $13,9/Page

Thus, the supernatural is a recurring them in Shakespeare’s works of literature. In the play Julius Caesar, we see one such instance of the reiterated belief of the supernatural.

As the play opens, we witness a short display of Roman life. The citizens present seem to have a strong conviction of the supernatural and its ability to solve everyday problems as well as some of the more complex.

The people turn towards unworldly forces to guide them along as they follow a preordained destiny. An instance of the involvement of spirituality in every day life is put forth in Act I Scene 1. The setting is of the Feast of Lupercal. This festival is being celebrated as cobblers and senators alike roam the streets. The feast is held to honor the god Pan, the queen of fertility. This time is when infertile females are supposedly given increased fertility, as is obvious in the praising of Pan throughout the festivities. The main event is a race in which, through a certain method, virility may be given to the formerly sterile.

Caesar’s wife, Calpurnia, is shown to be completely sterile and so the problem of bearing the emperor’s heir is presented. Therefore, in accordance to the principles of the feast, Caesar commissions Antonius, “To touch Calpurnia; for our elders say/The barren touched in this holy chase,/Shake off their sterile curse.” The exact definition of the touching is that she must make contact with a whip of a goat’s hide carried by a racer during the aforementioned chase. Caesar believes this to be the most appropriate approach to attaining a child to succeed him in his place as ruler. The faith that he places in the gods to provide him with what he requires most is a premier representation of the Roman peoples’ attitude towards the supernatural.

Soothsayers of the Shakespearean era were believed to have been endowed with supernatural powers to forecast future events. Following the trend of otherworldly guidance in matters of fate, Shakespeare applies those who held the role of prophet to produce foreshadowing and to build suspense. There are two major instances of precognition in Caesar. Perhaps the most infamous line of the drama is, “Beware the ides of March,” as exclaimed by the old soothsayer towards Caesar. This is an obvious portend referring to the eventual assassination of the great ruler, as he was indeed murdered on the ides of March, or in other words, the fifteenth. Unfortunately, Caesar passes up the comment and makes the remark, “He is a dreamer; let us leave him. Pass.”

Despite Caesar’s disbelief, this incident leaves the audience waiting in suspense for what is sure to be the climax of the tragic story since the soothsayer stated it. The second display of this technique is the storm that appears on the fourteenth of March, one day before that dreaded event that was foretold was to take place. In Act I Scene 3, a description of the monstrous storm is given: “But never till tonight, never till now,/Did I go through a tempest dropping fire…” Filled with thunder and lightening, the storm rocks Rome and leaves a foreboding feeling in as it passes. Later, Calpurnia recalls the wicked tales she has heard; of a lioness walking the streets, dead men rising from the grave, and fire falling from the sky. All of these happenings omen the fall of the city in a great travesty to come.

Honor means a great deal in many societies, including that of the Elizabethan Age. Shakespeare decides to appeal to this sense of honor by incorporating it into his play. The matter of honor was no different in the Rome spoken of by Shakespeare. Following Caesar’s assassination at the hands of the conspirators, Brutus and Cassius flee to the countryside where Brutus dreams of Caesar’s ghost and witnesses other signs of impending defeat in Phillipi, such as the sight of ravens and kites hovering above his army. These harbingers are seen as true when Caesar is avenged. This vengeance comes in the form of a double suicide, committed by Brutus and Cassius. The suicides came as a result of a need to retain honor. They feared that they would be dragged through the streets if their honor was not kept after they were captured. In Elizabethan times suicide was replaced by dueling, or Duello. Nonetheless, members of both periods were willing to die for the concept of honor.

As is evident throughout Shakespeare’s Julius Caesar, supernatural phenomena played an important role in daily life. Elizabethans believed the paranormal governed not only the spiritual world, but nature itself as well; consequently, such supernatural events became integral parts of English literature of the time. They serve to add many things to the piece they are contained within. Oftentimes, they supply insight into the major characters and augment the impact of key scenes on the audience. The supernatural itself appeals to an audience’s curiosity, leaving them sitting on the edge of their seat as they wait for the foretold events. As is clearly portrayed through Shakespeare’s constant inclusion of such occurrences, the supernatural profoundly impacted Elizabethan life. Today, that legacy of the improbable has been passed down for generations, existing in forms that remain almost as obscure as the phenomena they promote.

Role of the Supernatural in Julius Caesar. (2016, Jul 10). Retrieved from https://studymoose.com/role-of-the-supernatural-in-julius-caesar-essay 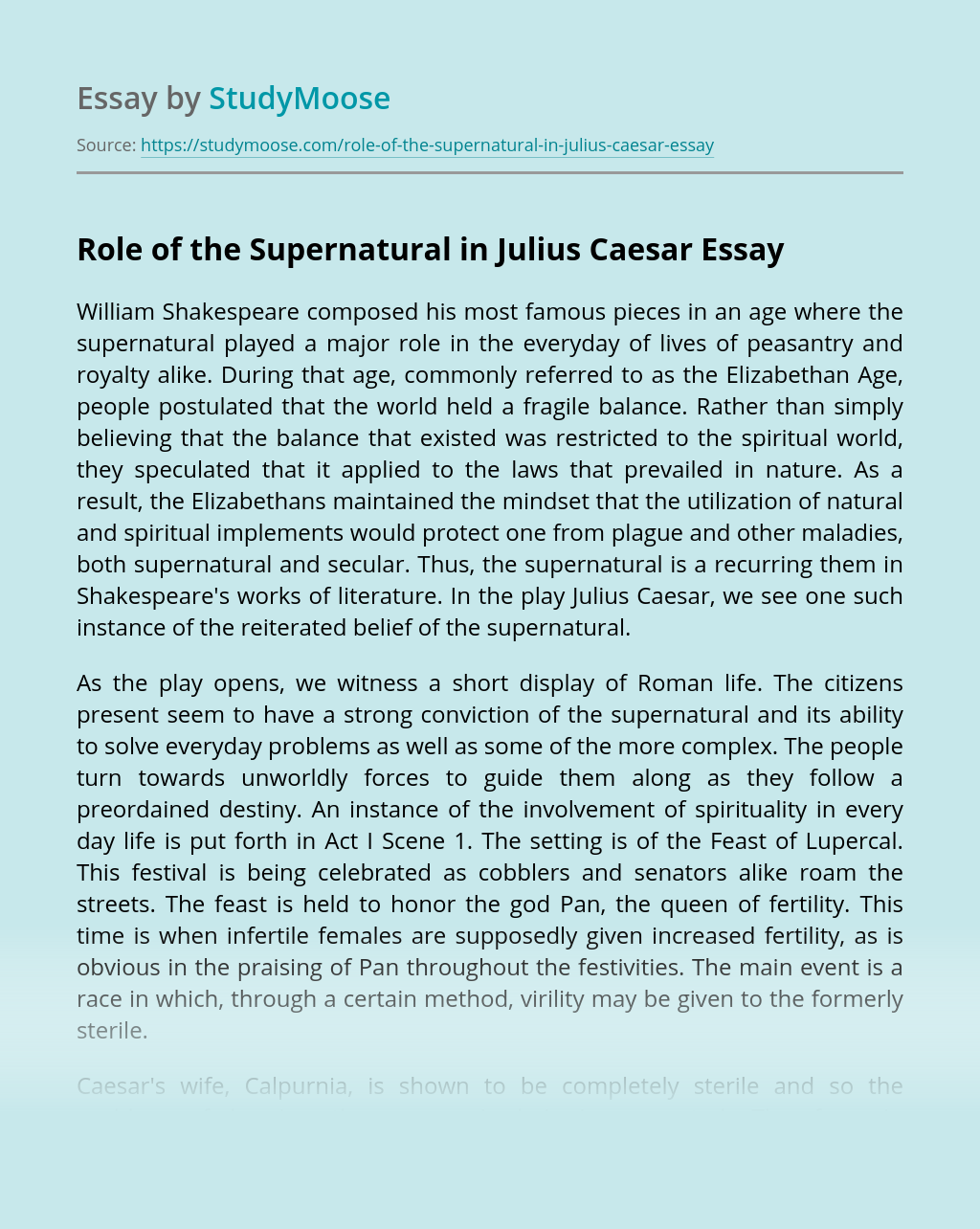 Because of you every year a new generation is build A generation which is ready 4 the experience of life and the experience of been responsible Here is your short paragraph on My Teacher! I am being taught by many teachers in my school. Every subject has a different teacher, my Math teacher. Lakshmi Ma’am...

Performing Arts Is a Waste of Time, Money and Resource

Nowadays almost all schools include such subjects as art, drama, and music in their educational program. Therefore, by the time when children graduate school they have general understanding and basic knowledge in all of them. In my opinion, it is a positive tendency and these subjects should indeed be a part of every child’s education....

In “America’s Real Dream team”, published in the New York Times on March 21, 2010, Thomas went to a big Washington party to attend the 2010 Intel Science Talent Search finals. To his surprise, Most of the finalists who came from American high school hailed from immigrant families, largely from Asia. Thomas declares himself a...