Robert Frost's poem "Stopping By Woods on a Snowy Evening"

This paper aims to analyze Robert Frost’s poem “Stopping By Woods on a Snowy Evening” from the perspective of stylistic analysis. This analysis is made under the Graphlogical, Grammatical, Syntactical and Phonological patterns. I have also found tropes and schemes that are present in the poem. This paper is so helpful to analyze the structure and style of Robert Frost’s poetry, his themes, views and treatment of nature.

Don't use plagiarized sources. Get your custom essay on
“ Robert Frost’s poem “Stopping By Woods on a Snowy Evening” ”
Get custom paper
NEW! smart matching with writer

“Style” is a word derived from Latin word “elocution” which means style and means “lexis” in Greek. Style is a broader term. It has several meanings in and outside of the literary text. A particular procedure by which something is done, a manner or a way is style. Broadly, appearance of everything is style. The way of doing something or the way of living is also style. Style is also related to a personality of a person.

A style reflects the thoughts of a person’s mind. It describes the way of writing and reading of a person.

Stylistics is a branch of applied linguistics concerned with the study of style in texts. Before 20th century stylistics deals only with literary texts. But from 20th century, it started to deal with none literary texts. For instance: religion, low, advertisements, newspapers, etc. Katie Wales in A Dictionary of Stylistics writes ” The goal of most stylistics is not simply to describe the formal features of texts for their own sake but in order to show their interpretation of the text, or to relate literary effects to linguistics causes where there are felt to be relevant”.

Stylistic analysis provides a commentary which is objective and scientific based on a concrete quantifiable data and applied in a systematic way. It uses specialized technical terms and concepts which derive from the science of linguistics. Stylistics analysis is different from literary criticism. Literary criticism continues to focus on interpretation and the field of linguistics has little to say about literature beyond the sentence level.

We are going to analyze the text of the poem according to the following levels of stylistic analysis.

PHONETIC LEVEL: It is an examination of sounds; we study the characteristics and potential utility of sounds in this level.

PHONOLOGICAL LEVEL: It is the study of the sounds system of a given language; the formal of pronunciation.

GRAPHLOGICAL LEVEL: It is the analogous study of a language writing system; the formalized rules of spelling.

GRAMMATICAL LEVEL: in this level, both the syntactic and morphological levels are discussed. The aim is to analyze the internal structures of sentences in a language and the way they function in sequences. Clauses, phrases, nouns, verbs etc need to be distinguished and put through an analysis to find out the foregrounding and the deviation.

LEXICAL LEVEL: It is the study of the way in which individual words and idioms tend to pattern in different linguistic context; on the semantic level in terms of stylistics.

THEME OF THE POEM “STOPPING BY WOODS ON A SNOWY EVENING”

Robert Frost has written many poems. “Stopping by Woods on A snowy Evening” is one in which he expresses his emotions and feelings towards life and nature. Perhaps the most important theme that has been implemented here in this poem is the conflict and loneliness in life. This can be clear from the last two lines of a poem. That is he has to go and struggle in this life before the coming of his destiny ” death”. 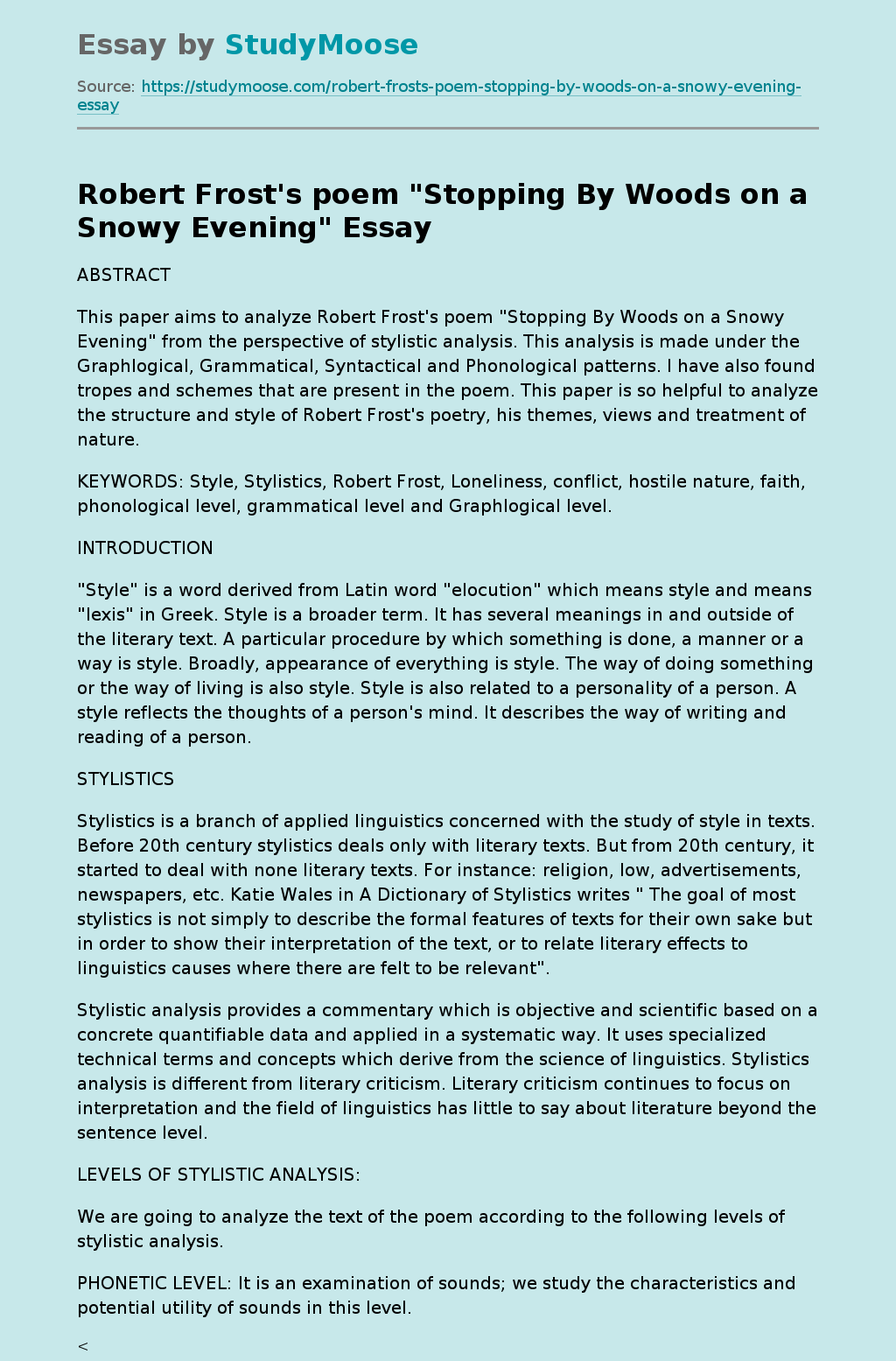