How does Robert Frost use rural imagery to suggest life's journey in After Apple Picking and The Road Not Taken?

In the poem After Apple Picking the literal meaning is after many long days of work after the apple harvest, the speaker is tired of apple picking and the narrator reflects upon what he has done and what he has left undone. Ever since the morning, when he looked through a sheet of ice lifted from the surface of the water trough he has felt drowsy and dreamy. Though his ladder is still leaning against the tree and he has failed to pick all the apples.

Don't use plagiarized sources. Get your custom essay on
“ How does Robert Frost use rural imagery to suggest life’s journey in After Apple Picking and The Road Not Taken? ”
Get custom paper
NEW! smart matching with writer

Even if the harvest is unfinished he knows it must be over as winter is coming and he now feels weary and experiences sleep coming on, but he begins to wonder whether or not is normal sleep or something deeper.

The literal meaning of the poem ‘The Road Not Taken’ is it is about a traveller who is walking in the woods and has come upon two roads. The traveller cannot travel both roads and thus must make a decision which one to walk.

This is also the same in The Road Not Taken as one of the tones of the poem could be regret due to choices not taken, as he could only go down one road, therefore would have to make a decision one way or another, with either leading to regret as he may never know where the other could have taken him, as in choices in life.

Figuratively both poems can be applied to a persons life; in After Apple Picking he now claims to be ‘done with apple picking’ showing he know feels he has come to the end of his life or is near it; and doesn’t feel as though he has any more choices left in life to take, therefore he is reflective of what he has and hasn’t done in life. ‘And there’s a barrel that I didn’t fill’ on line 3 which gives the impression of an unfulfilled life where he has clear examples of situations where not everything has been done. The concept of uncertainty and indecision is reinforced in line 4 with the modal verb ‘may’ showing that though there maybe choices that he didn’t take that perhaps he should have or he still might be thankful that he didn’t, as they may not have been as valuable or as benefiting to him as where he is now. In line 6, ‘done with apple picking’ also suggests acceptance as even if there was something he wanted to change like a chance that he did or didn’t have, he is unable to change it now so the only option that he has is to accept the options that he took when he did have the chance.

The Road Not Taken can also be applied to a person’s life as the diverged road that he comes to on his travels could represent two choices that a person may have in life, like in After Apple Picking. The fact that there are two could suggest that there are different and many choices available. As he has to decide and cannot travel both he is therefore regretful ‘sorry I could not travel both’. He describes the wood as a ‘yellow wood’ which could represent bright and cheerful emotions as yellow is a bright colour but also indecisive which maintains his idea of uncertainty with the problem he is faced. In line 3 he tells us ‘long I stood’ showing he spends along time contemplating on which route to take it isn’t a spontaneous decision also, if the road symbolises a choice in life then great thought should be put in as it could be potentially life changing and could maybe end up being the wrong choice if not thought out properly. Resembling most choices in life is the first road that he describes as it has undergrowth which symbolises obstacles that he may encounter on the way, but like opportunities that we have in life, the harder or more challenging that the route is usually it will have a bigger reward.

In After Apple Picking the objects chosen like the apples are metaphoric as they can represent choices so go beyond the literal. Frost uses modal verbs to increase the concept of uncertainty and to show that the apple picker isn’t entirely sure as would have said there were ‘two or three’ rather than ‘may be two or three’.

In the poem there is irregular rhyming as not all but some of the lines rhyme, giving the effect of the different phases of sleep and how sometimes he is more aware and consistent with the rhyming but then begins to drift off to sleep making the rhyming seem less significant to what it was when he was awake. The on/off rhyming of the poem makes it flow inconsistently at random times like when he is awake and when he is becoming drowsy. The basic foundation of iambic pentameter also gives this effect. The season of winter could also be used like sleep to represent death. In this poem Frost also uses the repetition of vowel sounds, assonance to create a rhythm of his thoughts and to which state he is in. Its structure is a continuous form.

In The Road Not Taken the title straight away suggests regret and choices not taken as it is negative and we would usually expect to see the road taken rather than ‘The Road Not Taken’. The words are simple and uncomplicated as this then emphasises the metaphorical image of the simple idea of a fork in the road.

How does Robert Frost use rural imagery to suggest life's journey in After Apple Picking and The Road Not Taken?. (2020, Jun 02). Retrieved from http://studymoose.com/robert-frost-use-rural-imagery-suggest-lifes-journey-apple-picking-road-not-taken-new-essay 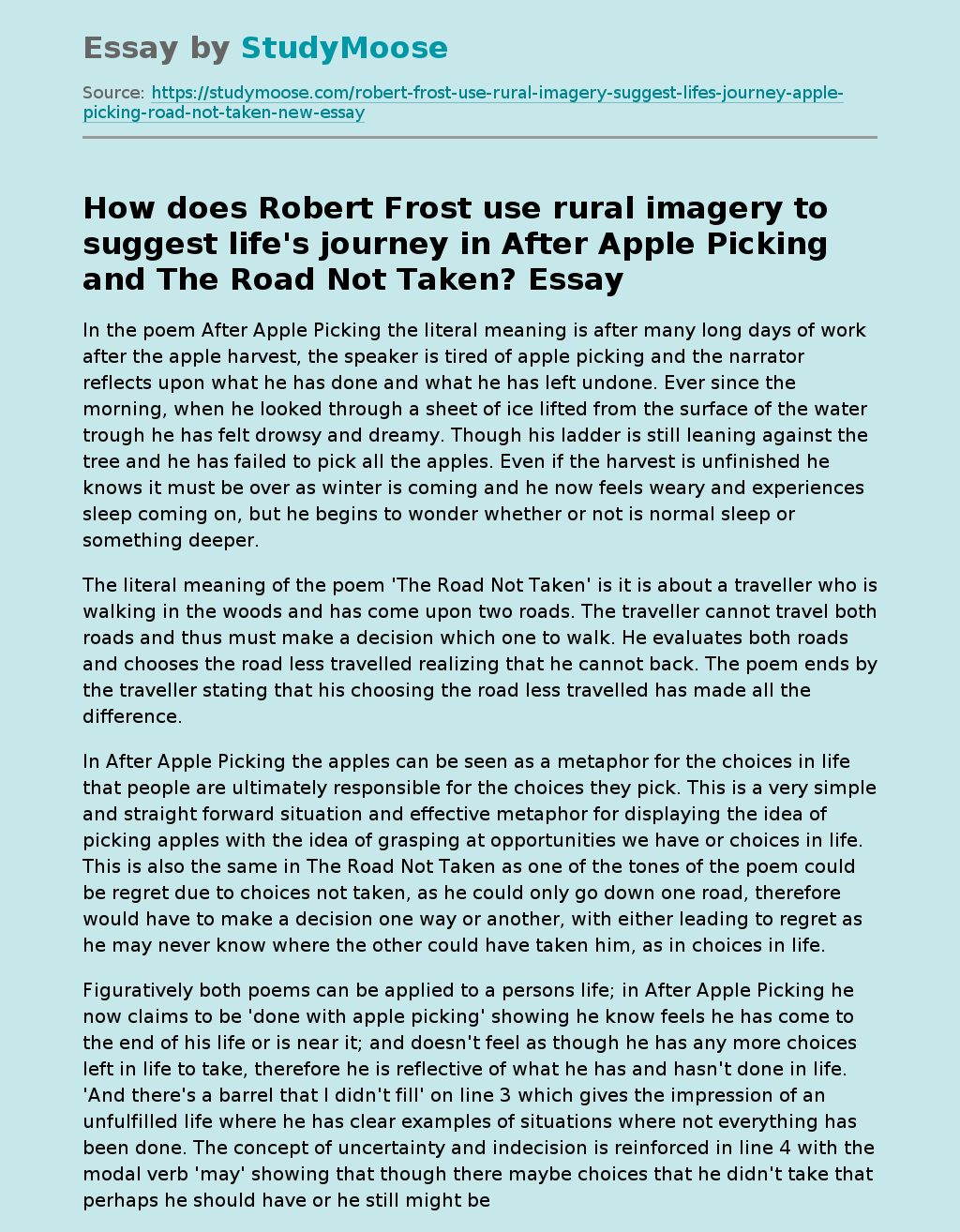