Robert Frost as a Modernist Poet

In spite of the Pastoral element that was predominant in all of Robert Frost’s poems, he was still considered a modern poet because the poetry that he wrote was well endowed with the many problems that men who lived in the modern world faced with Science and Technology. He was a contemporary and great friend to such modernist greats as Ezra Pound and Wallace Stevens. Although he resembled these modernist poets, Frost was quite different from the rest of the modern poets of his time.

Don't use plagiarized sources. Get your custom essay on
“ Robert Frost as a Modernist Poet ”
Get custom paper
NEW! smart matching with writer

The modern elements of his poetry are those of capitalism, the self-centeredness of the mordent man, the bored existence, isolation, dilemma, and symbolism. The two poems that seemed to me most striking modern in nature were The Death of the Hired Man and Home Burial. The two poems are similar in nature that in both of them there is a conflict between the husband and the wife. Here the husbands represent a view of life which is very antithetical to wives’.

In the former poem, there are three characters: Warren, Mary and Silas. Warren, the domineering husband, represented capitalism, Mary, the cowed wife, is a foil to her husband, and Silas represents the lot of the millions of the workers who are the victims of the modern capitalistic society . There are millions of workers, such as Silas, around the world who toil and toil , but remain unrewarded die of an unlamented death.

In this poem, Silas was the central figure, due to the poem recording his death.

Silas’s character is that of pathetic and sympathetically arousing, who in his old age, is a helpless and useless soul. He is alienated from the world, with no shelter over his head or home to go to. His very poor self respect makes him feel ashamed to his brother and as a result he is also isolated from his rich banker brother.

During the busy days, Silas was accused by Warren of abandoning the farm. This confused Warren, and he often wondered why Silas would leave. It turned out that Silas was leaving for higher wages. This would indicate that he was paid very poorly for his labor. So, Warren does not find any fault in his own capitalistic manner by which he tried to buy the labor of Silas in return of the little wages. In this way he represents the capitalist society of the modern world.

The poem Home Burial is also based on a modernist theme that is known as self-centeredness. In this poem, the over-wrought wife is merely a foil to her practical husband. Each of their views on life is very diametrically opposite. The wife, who is under the burden of the grief over the death of her first born, cannot forget the fact that her husband was the one who dug the grave of their child, and also buried him there. To the husband, it seems like a normal act that he dug the grave of his own son. This shows that he has accepted the fact that his son has passed due to an accident and whose grief can be submerged beneath the daily existence of life.

The husband makes some arguments in order to prove to his wife that the death of their son was accidental. He says that “from the time one is sick to death, one is alone and he dies more alone, and that friends make pretence of following to the grave, but before one is in it, their mind is turned.” This is viewed as the husband speaking out in a selfish nature. All human sympathy is gone and it has been, therefore, replaced by mere selfishness. In this way the poem is a modern domestic epic, which exposes some modern crises to our eyes.

The next poem that proved that Frost was a modernist poet was Mending Wall. This poem was based on the modern theme of isolation. The modern men established boundaries and isolated themselves from each other. Frost’s metaphysical treatment of this physical and psychological isolation is also evidence of his modernity. In this poem, he juxtaposes the two opposite aspects of the theme of the poem and leaves it to us, the reader, to draw our own conclusion.

The truth of Frost’s poems are that they are set in the presence of pastures and plains, mountains and rivers, woods and gardens, groves and bowers, fruits and flowers, and seeds and birds. However, this approach to nature and this natural phenomenon are different from the romantic poets and are set in a more realistic and modern in nature.

Unlike the Romantics, Frost took notice of both the bright and dark aspects of nature. The example that points this out is “Two Tramps in Mud Time.” It tells that, below the beautiful calm, there is a lurking turmoil and storm.

In fact, the world of nature, according to Frost, is not a world of dream at all. It is more of a harsh, horrible and hostile, which is just the opposite of the modern urban world. This would explain his experience of the pastoral technique to the way he commented on the issue of humans in the modern world, his employment of symbolic and metaphysical techniques and his awareness of the problems that many humans had in modern society. This would justify his presence as a modern poet.

Robert Frost as a Modernist Poet. (2016, Apr 14). Retrieved from https://studymoose.com/robert-frost-as-a-modernist-poet-essay 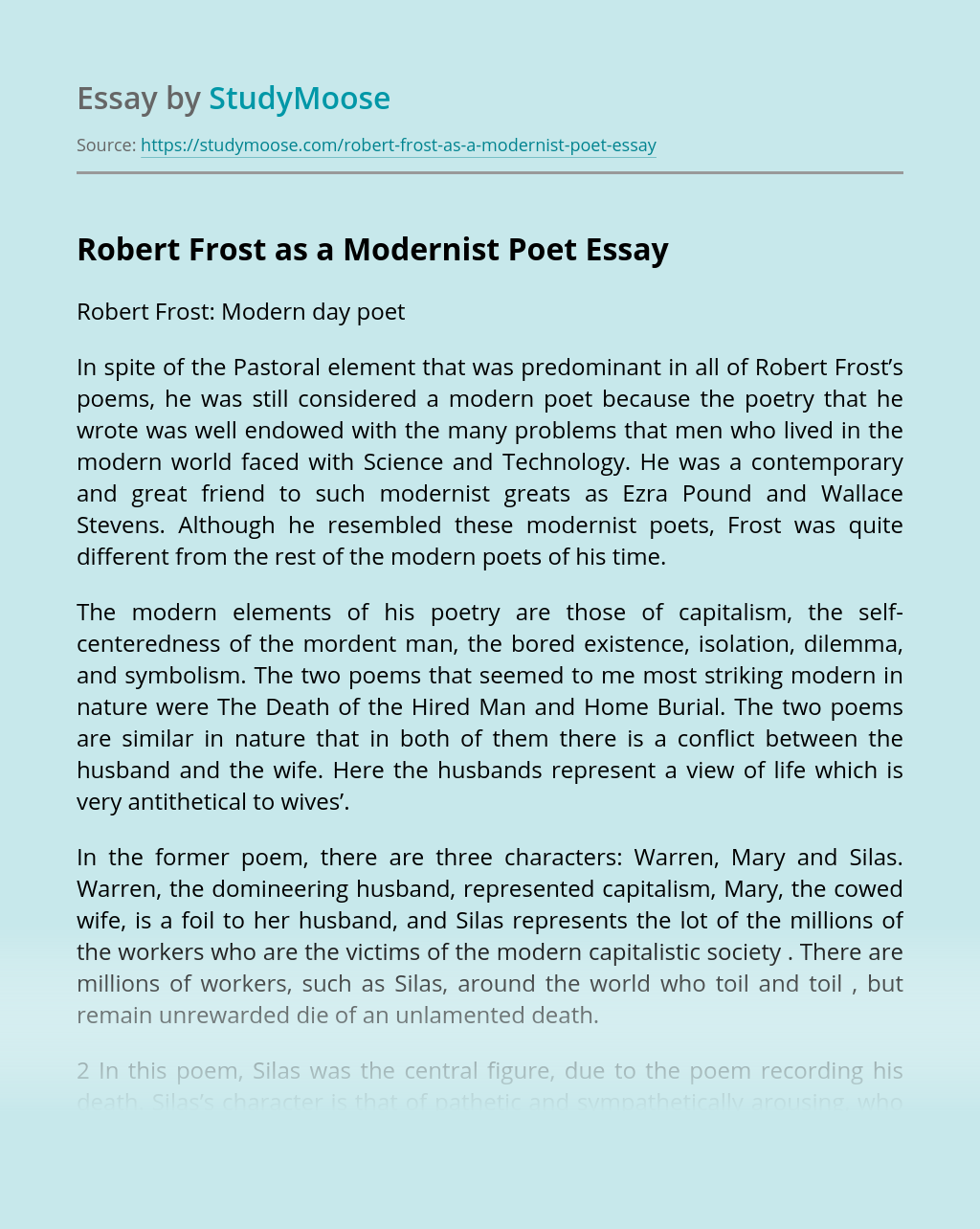