Risk assessments, foreign direct investment, and Economic development have well established relationships that have governed them over a period. However, before we discuss the relationships that exist among these factors, it is important that we define these factors so that the reader may have a shred meaning with us in regards to the same. Risk assessments can be defined, as the name suggests, the probability that an economy’s business returns will be less than the expected return. For an economy, these are mainly macroeconomic factors such as climate changes, political unrests, legislative instability, and custom disputes among others.

Don't use plagiarized sources. Get your custom essay on
“ Risk assessments ”
Get custom paper
NEW! smart matching with writer

There are many institutions that help asses the various risks that may face an economy. However, the major ones include the International Monetary Fund (IMF), The United Nation’s Development Progranmme (UNDP), The Central Intelligence Agency (CIA), and private institutions such as the Economist Intelligence Unit. Used together, the reports provided by these institutions can prove to be invaluable in risk assessment and hence international investment.

Foreign direct investment is the monetary value of the investment that an economy will receive over a period.

Depending on type of economy the level of protectionism, foreign direct investment (FDI) can either be coveted or can be discouraged by the government. Despite the fact that FDI increases a nation’s GDP, it may actually lead to a reduction in the GNP especially if the profits are repatriated abroad. However, many FDIs bring about infrastructural development and technological transfer.

Governments therefore differ on the level of FDI that they are willing to attract. Economic Development can be defined as Economic growth coupled with Infrastructural development.

Changes such as new roads, electricity, and communication infrastructure are all part of Economic development. As rule, with all things held constant the more risky an economy is, the less the foreign direct investment an economy will experience. This is because investors are not willing to invest in a place where the level of uncertainty is high. The same rule also applies in the relationship between risk and economic development. Since greater risk is an indication of more chances of an economically unfavorable event occurring, it may well be an indication that the event has already occurred and the market has already reacted to it.

The goal of this paper is to establish what relationship if any, these three factors have exhibited as they play out in China. The major risks that have faced China over the past years have been shifting from time to time. Within the period of 1971 – 1975, there was too much political risks for free enterprises. Communism was at its peak under the leadership of Chairman Mao. Since this was a communist economy, there was no direct foreign investment. Between 1976 and 1980, was the period of the fifth Five Year plan.

During this time, we see the macroeconomic risks in china declining. The basis of this is the fundamental reform of 1978 in shifting the Economy from a communist economy to a market one. During this time, the foreign direct investment was more than $500, 000,000. This was truly a great leap forward. Between the years 1981 – 2007, the story is that of an economy that is becoming more and more of a free market. As time goes by, china is opening up its market and the risk is going down. Other components of risk are also being taken care of.

The issue of currency rates that had for along time that had for a long time dogged China trade with other countries, is slowly being tackled and hence creating a better environment for foreign companies to work in. The government has also started dealing with piracy, which had discouraged investment in china. Between the year 1998 – 2007, the amount of Foreign Direct Investment has risen from $45 billion to $82 billion. The conclusion that can be arrived at in regards to the relationship between Risk and Foreign Direct Investment is that the higher the macroeconomic risk, the lower the FDI and vice versa.

In this section, we shall look at the relationship between risk assessments economic developments. Since the organizations that made risk assessments were organizations such as the Economists Intelligence Unit, which were based in capitalist economies, the risk was to be looked upon as risk towards the investors. For the period between 1970 – 1978, the Chinese economy was under communism. The hand of the government heavily guarded the markets. This reflected a lot of risk on the part of the private sector.

There was therefore no private investment to spur the private sector of the GDP. However, even the government-controlled sector performed poorly. Concentration was made on unrealistic targets such as increasing steel production (which was of low quality), exploitation of over-estimated oil reserves, and concentration on low-tech agriculture and so on. The economy continued to perform poorly. However, after the death of Mao in 1978 and the subsequent takeover by Chairman Deng, the Chinese economy grew by over 9%.

This was actually unprecedented. The reason of this can be linked to the opening up of the economy by the latter and hence leading to a reduction in the risks that were faced by private players in the market. In the period between 1980 – 2007, the Chinese economy has continued to open up its doors to other investors and tackling issues that would be detested by private investors. Issues such as piracy, low quality product, and smuggling are being tackled by the government hence leading to better products being produced by private hands.

Such proactive steps by the government reduce the risk of losing intellectual property. Currently, China is ranked as the second largest economy in the world in terms of purchasing power parity. We can therefore conclude that risk assessment has a relationship with the economic development. The higher the risks that businesses faced, the lower the economic growth and vice versa. 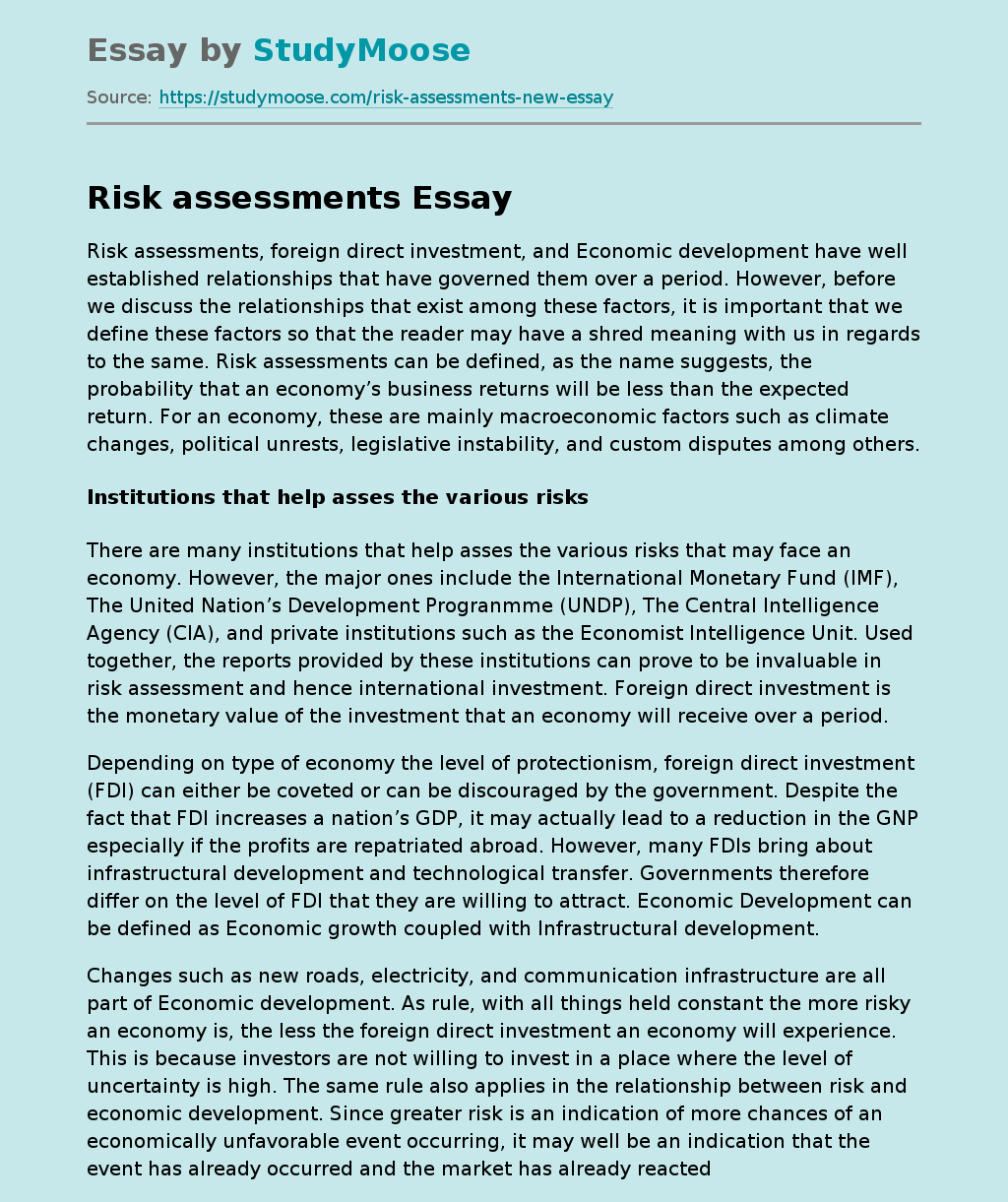