Within the universe, there are celestial bodies that join together in solar systems that make up galaxies, galaxies that create everything tangible and visible and real; however, within the heavens and all that is palpable and perceptible and concrete, there is so much more: the intangible. At times this is presented as luck or fortune, and sometimes, it shows itself as love. Yasunari Kawabata’s “The White Horse” (1963) is a ravishing run through the intangibility of love, and of loss. It is the tale of a man who sits alone, pondering and worrying about the life of his son, and about the affection he once felt for a girl when he was young.

Don't use plagiarized sources. Get your custom essay on
“ Riding the White Horse ”
Get custom paper
NEW! smart matching with writer

Kawabata offers very little in character description, allowing the audience to imagine Noguchi, Taeko, and Noguchi’s family as they please. The only actual description given is buried halfway into the account, telling the reader “Noguchi had married another girl, had fathered children, had aged, had forgotten about that kind of thing.

” (Kawabata p 427). The author speaks of Taeko, which can mean either the mysterious child, or the child of many blessings, both of which fit the character very well. Taeko is the lost love of Noguchi, though he has not seen or heard from her in “…forty years.” (Kawabata p 428), but when she is spoken of directly, she evokes a sense of wonder. Even as a child she captivates Noguchi, drawing herself atop a blessed animal, “ ‘That’s the horse that stamped on the mountain and made the sacred spring gush up… Taeko is riding him.

She is the long lost everything that Noguchi had wanted, and she is the cure to his insomnia and anxiety. Though little is done to physically describe any of the characters, the reader is able to tell how Noguchi feels through Kawabata’s narration. Setting plays a predominant role in this story, as Kawabata gives superb description of both the observable, the appreciable, and the undetectable. His portrayal of the landscape is splendid as he paints a picture of the Japanese scenery as he intertwines the actual with the ethereal. Lines such as “In the leaves of the oak tree, there was a silver sun.” (Kawabata p 426), and “The green of the thick foliage slowly blackened. From the summit of the trees, a white horse leapt upward and galloped across the gray sky.” (Kawabata p 427). The majority of the story is told using the scenery and setting within Noguchi’s perception, and is one of the most important aspects of Kawabata’s piece.

Kawabata’s use of language and tone take the forefront of importance in his story, from the description of the trees and the sunlight to the explanation of Noguchi’s angst and anxiousness. His calculated overuse of adjectives affords the audience a vivid visual that is inherently intimate and individual. With lines like “The figure of the white horse, galloping across the sky, was clear. But neither the form nor the color of the rider astride him was clear. It did not seem to be a girl.” As a result, no two readers will see the same horse, or the same women as Kawabata leaves just enough nebulousness to keep the images personal. The author’s grayish tone lends itself to a certain sadness in hindsight, as the reader cannot truly experience the full degree of sorrow that Noguchi feels until the final sentence, “He had not seen Taeko in forty years. There was no news of her.” (Kawabata P 428), when it is realized that the old man can do little but sit and wait for his nightly vision to attain a small piece of contentment.

Yasunari Kawabata does not attempt to draw the reader with a long and fanciful story, but rather, he has used his existential intellectuality to masterfully narrate just one of the many lonely nights that Noguchi has and will continue, to experience. The theme of loneliness and regret of what could have been, and what has transpired leaves the audience wondering if Noguchi would be happier in death, possibly reunited with his cosmic connection to heaven’s “mysterious child.” When Kawabata writes “Today was the first time that the dream of the white horse had come to Noguchi, not as he lay in bed with his eyes closed, but as he sat open-eyed in a chair. It was the first time, also, that something like a long black cloth had streamed out behind the woman. Although it flowed in the wind, the drapery was thick and heavy. ‘What is it?’ Noguchi gazed at the darkening gray sky from which the vision of the white horse had faded.” (Kawabata p 428), the short story could very easily be seen as Noguchi’s last fleeting attempt at happiness on earth as he slips into the great abyss and passes into the next world, riding the sacred white horse to his one true love 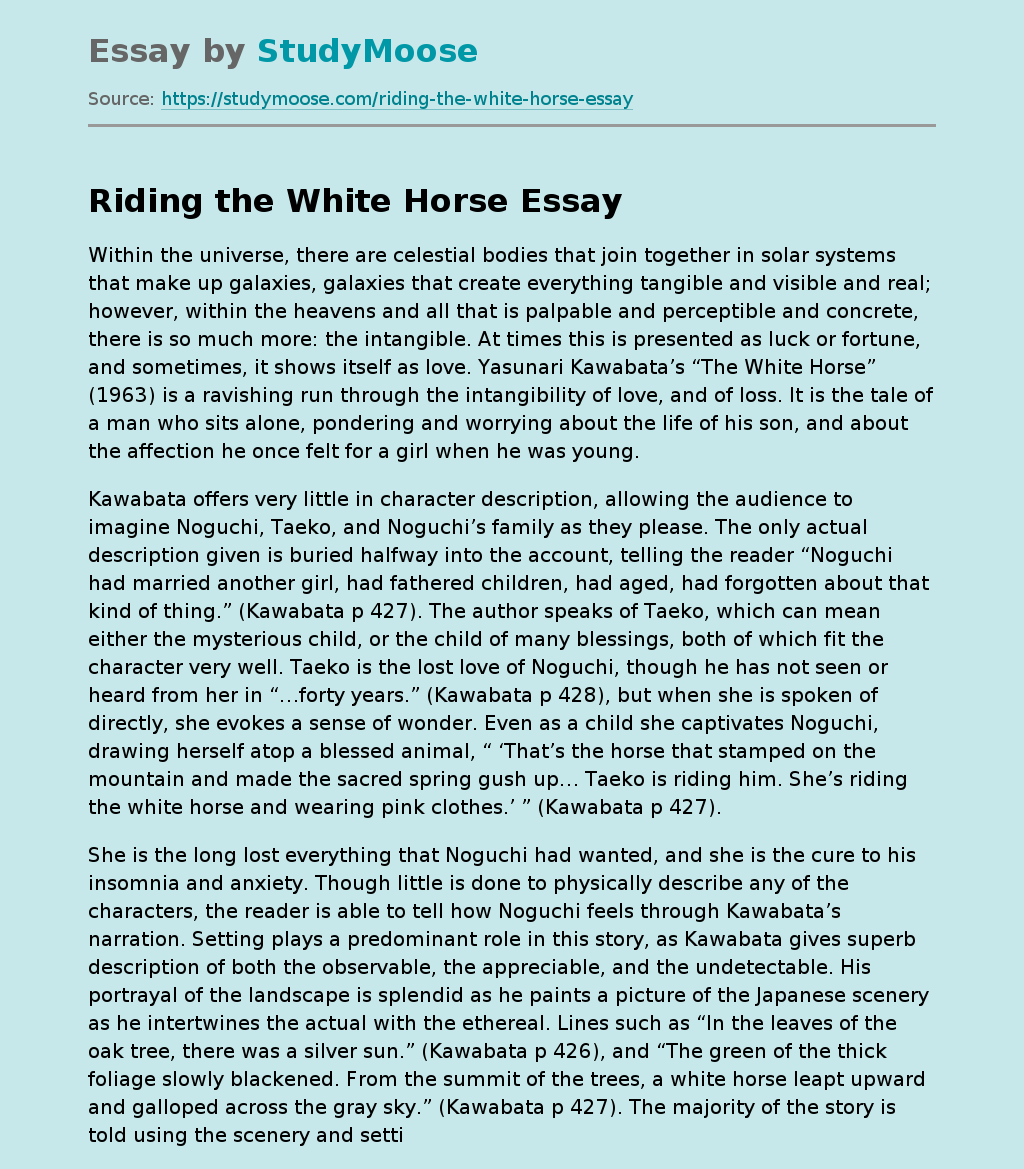