Riders to the Sea as a modern tragedy

Turn in your highest-quality paper
Get a qualified writer to help you with
“ Riders to the Sea as a modern tragedy ”
Get high-quality paper
NEW! AI matching with writer

It is also the story of those families in other countries where people are helpless like Maurya in the hands of nature. In Riders to the Sea, the tragic intensity of the life of Maurya, who falls a victim to her ill-luck losing all the male members of the family in the sea is also shared by other women of Aran Islands.

Therefore, Maurya is not an individual woman here; she is every woman of her community. Wretched and helpless women like Maurya are also found in other contexts in other countries. Thus the play ceases to be regional and becomes global in significance, which is the chief characteristic of a perfect modern tragedy. Riders to the Sea is a modern play from another important point of view. The stage and props management and the directions provided by the dramatist at different stages in the play are characteristic of a good modern play. Plays until 19th century were highly narrative. The stories of such plays were developed mainly through the speeches of characters.

Whenever a son of Maurya’s is in the sea, she remains awake all night praying for his safety and seeking God’s grace to save her son, but every time Maurya is betrayed in her prayer and expectation. The indifference of nature to Maurya’s prayer and hopes as well as her sufferings makes her existence on earth completely meaningless. At the end of the play, Maurya , defeated in the war of life, accepts an stoical surrender to fate: “No man at all can be living forever”. Despite being a modern play, Riders to the Sea contains a number of classical elements. The play deals with some basic and fundament points of classical tragedies.

Firstly, the play very strictly maintains the three unities of time, place and action. Only what happen in one day are shown on the stage and the events that occurred earlier are reported on the stage—which is a basic requirement of ancient plays. The play opens and ends in the same place and events that occur or are done in distance are off-staged, and the play holds the thread of a single plot very consistently—which are also the basic requirements of ancient plays. Secondly, Riders to the Sea deals with the classical concept of tragic conflict. Ancient critics and dramatists believed in fatalism for human sufferings. They held that people suffer not for their own faults and actions but for their fate. According to the concept of fatalism, everything is predestined and man’s efforts of changing or preventing it do not succeed.

Man is totally helpless in the hands of fate. InRiders to the Sea, all male members of Maurya’s family get drowned in the sea one by one but none of them is responsible for their death. The death of the male members causes untold sufferings for Maurya and her two daughters, but neither Maurya and her daughters are responsible for their sad fate nor could they prevent their sufferings in any way. Considering the aspects discussed above, it can be said that the play Riders to the Sea is a modern tragedy in classical form. It is modern in its theme, characterization and in the way it communicates the story to the audience and classical in its form and concept of tragic conflict. The blending of modern and classical elements in this play has made it a unique drama in the history of world literature.

Riders to the Sea as a modern tragedy. (2016, May 15). Retrieved from https://studymoose.com/riders-to-the-sea-as-a-modern-tragedy-essay 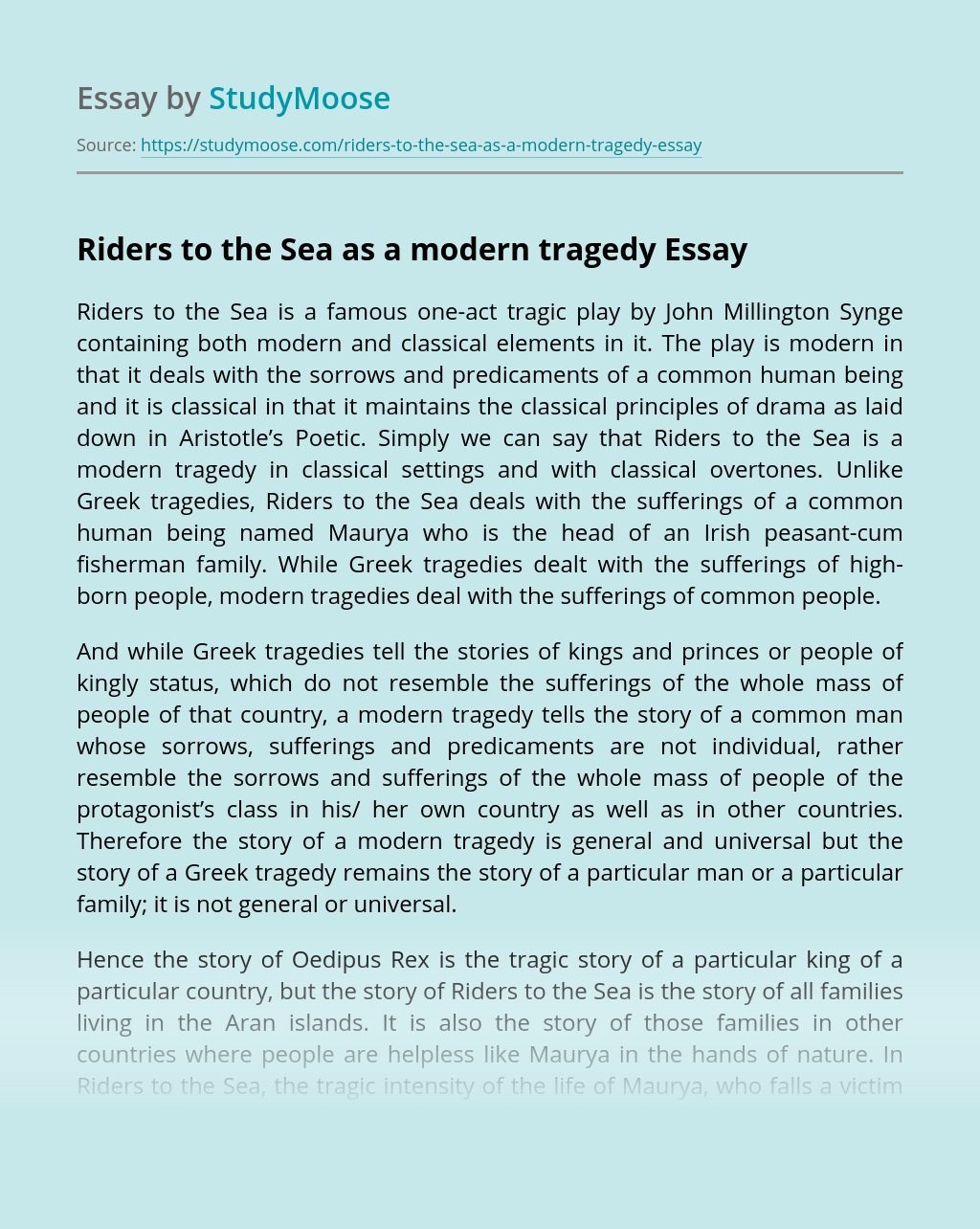 Turn in your highest-quality paper
Get a qualified writer to help you with
“ Riders to the Sea as a modern tragedy ”
Get high-quality paper
Helping students since 2015
Stay Safe, Stay Original