In 1588, Spain was on the move to conquer England and overthrow Queen Elizabeth I. Rather than hideaway, Queen Elizabeth set off to Tilbury in Essex to prepare her troops for the oncoming invasion of the Spanish Armada. Elizabeth’s speech is a compelling call of loyalty to her country, her people, and to her God. Elizabeth’s motives for this speech were clear, she intended for her army to be valiant, but to also prove that she, a woman, could be a powerful leader in a world full of men.

Don't use plagiarized sources. Get your custom essay on
“ Rhetorical Analysis Queen Elizabeth’s Speech to the Troops ”
Get custom paper
NEW! smart matching with writer

The Queen encourages her men, urges them of their duty and cause, confirms her commitment to them, and displays confidence in the fact that England will have victory over Spain. Elizabeth begins her speech by establishing her credibility to the audience. She states “I have always so behaved myself that, under God” and by doing so, places herself under the higher power of God, connecting with her audience’s religion and confirming that her authority comes from God.

The Queen also lets known that she is not ruled by fear, “Let tyrants fear,” she proclaims. This quote justifies her individuality by differentiating herself from those who rule through tyranny. Elizabeth’s language used in the speech also adds to her ethos.

The Queen assures her troops that she takes this undertaking seriously by declaring “I am come amongst you, as you see, at this time, not for my recreation and disport, but being resolved, in the midst and heat of the battle, to live and die amongst you all…” She displays pride in her nation as a whole.

As the speech continues, Elizabeth illustrates anger on behalf of her nation, she declares “foul scorn that Parma or Spain, or any prince of Europe, should dare to invade the borders of my realm.” Throughout, Elizabeth uses words to emphasizes her superiority, which can be shown in her repetition of the word “my.” She vows “to lay down for my God, and for my kingdom, and my people, my honour and my blood.” This not only exhibits Elizabeth’s personal investment but her royal significance as well. Elizabeth also projects a very masculine character which helps validate her speech. She refers to herself twice as a prince. She pledges to give herself as a “general, judge, and rewarder of…virtues”, all roles which, in her time, were held by men. A climatic line in the speech is when the Queen exclaims, “I know I have the body but of a weak and feeble woman; but I have the heart and stomach of a king, and a king of England too.” This is where the pure balance of the speech lies.

Rhetorical Analysis Queen Elizabeth's Speech to the Troops. (2016, May 16). Retrieved from https://studymoose.com/rhetorical-analysis-queen-elizabeths-speech-to-the-troops-essay 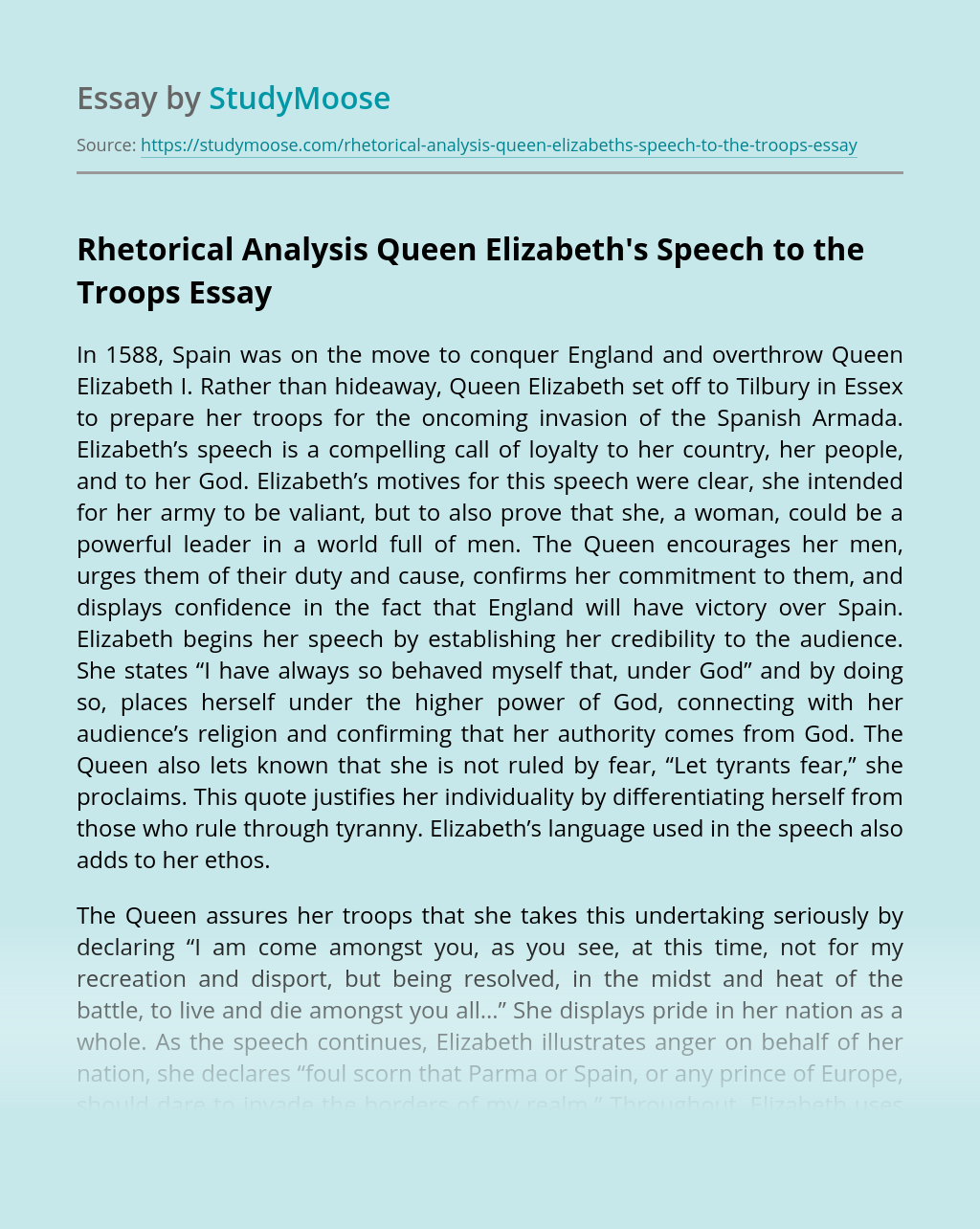