Throughout early European history women had not held high positions of political, religious, and social power. However, this all changed when Elizabeth I became the Queen of England, and the Supreme Head of the Anglican Church from 1558-1603. Even with Elizabeth in charge many people including Protestant’s, and Catholic’s were biased, and unhappy about her reign. The English however, who were biased to the thought of a female ruler in the being, had grown to love and adore their new monarch.

Don't use plagiarized sources.
Get Your Custom Essay on Queen Elizabeth – European history Just from $13,9/Page

With these responses to Elizabeth being in power, she responds with her head high trying to prove her devotion to her country, and people.

Throughout Elisabeth’s reign many people including both Protestant’s and Catholic opposed the thought of a female ruler. In John Knox’s First Blast of the Trumpet Against the Monstrous Regiment of Women (Document 1) he states that to promote women to rule any realm, and nation is against God’s word.

He states that the bible says it is forbidden for women to occupy the place of God. We can assume Knox to be biased by the fact that he is a Protestant religious reformer, and the fact he is a man. Likewise, in Nicholas Heath’s, archbishop of York, debate before the House of Lords (Document 2) he pleaded the rule of a woman is forbidden. Heath thought women were not allowed to preach, or minister the holy sacraments. In Christ’s church women were not allowed to be an apostle, or preacher, therefore Elizabeth cannot be the supreme head of Christ’s Church.

This too is biased because he is a traditional male ruler, and believes in the traditional church. Similarly, the bishops of the Church of England wrote a book The Second Book of Homilies (Document 5) that stated their opposition. The bishop’s book stated that the husband, or man, should be leader and author of love. The women should obey their husband, and cease from commanding. Wives must be ready at their husband’s commandment. This shows bias even though they are Bishops of England, Elizabeth just gained power and they are more traditional.

Finally, Edward Rishton, a Roman Catholic priest, On the Origin and Growth of the English Schism (Document 7) states that the Church of England focuses more on Elizabeth’s birthday than the Mother of God’s. In the chief church of London praises of Elizabeth are sung at the end of hymnals. This shows bias because Rishton is a Catholic priest, who is very traditional, and serious about how church should be ran, and the importance of Mary.

The English were unhappy having a female ruler in the beginning, but grew to adore their new Queen. In The Act of Supremacy by the English Parliament (Document 3) it states that the Queen is the highest of authority in her country as well as over the church. No foreign prince may have jurisdiction over her realm. This is biased though because her father, King Henry VIII, created the Act of Supremacy and Elizabeth has authority under the English Parliament. Similarly, in a pamphlet from John Aylmer, a friend of Elizabeth’s tutor, (Document 4) it states that the regiment of Elizabeth is not just a monarchy, but that she is a mixed ruler.

In England its not a dangerous thought that they have a female ruler because she shares her power coincide with parliament. Likewise, when William Tooker, Elizabeth’s personal chaplain, describes a “touching” ceremony (Document 9) he praises his Queen. He praises her on how Elizabeth looks. He praises her on how she can, by touching them, can heal people diseases on their skin. This however is biased because he is Elizabeth’s personal minister. Finally, William Clowes, Elizabeth’s personal surgeon, treatise (Document 10) tells the people to pray for Elizabeth to have a long life, of happiness, and tranquility so she can forever reign over them. This is biased due to fact he is Elizabeth’s surgeon, of course he wants her to be healthy to rule.

With her head held high, and courageous Elizabeth responds to these thoughts of her regiment with strength to prove she can rule as good as any man, and to show devotion to her people. In Jacques Bochetel de La Forest’s, French Ambassador for England, report on Queen Elizabeth’s proposed Parliamentary succession (Document 6) the Queen states angrily that she will not give up her throne. That all resolutions that parliament make has no impact without her authority. The will take counsel from men who understand justice, and the laws, and she will find them somewhere in her kingdom. Similarly, Elizabeth makes a speech to Parliament (Document 11) stating she does not need to marry.

She can rule just as well alone, and that she is already married to her Kingdom. Finally, Elizabeth addresses the English troops, before the attempted invasion of the Spanish Armada (Document 12). She states that She placed all her strength in the loyal hearts, and good will of her subjects. Elizabeth tells them that she will fight by their side, not for sport, but to live or die amongst her men, and for God. She goes on to give one of her most famous speeches where she says she may have the body of a weak feeble woman, but has the heart and stomach of a king, of a King of England. This shows true devotion to both her men, and country.

In early Europe women did not hold political, religious, and social power until the regiment of Queen Elizabeth I in England. Many Protestant’s and Catholic’s alike shared a bias, and controversial opinions that opposed her of ruling because she was a woman. After a few years, the English grew to love, and adore their Queen. With her head held high, Queen Elizabeth responded to those controversies, and showed she can rule a nation, along with showing devotion to her people. 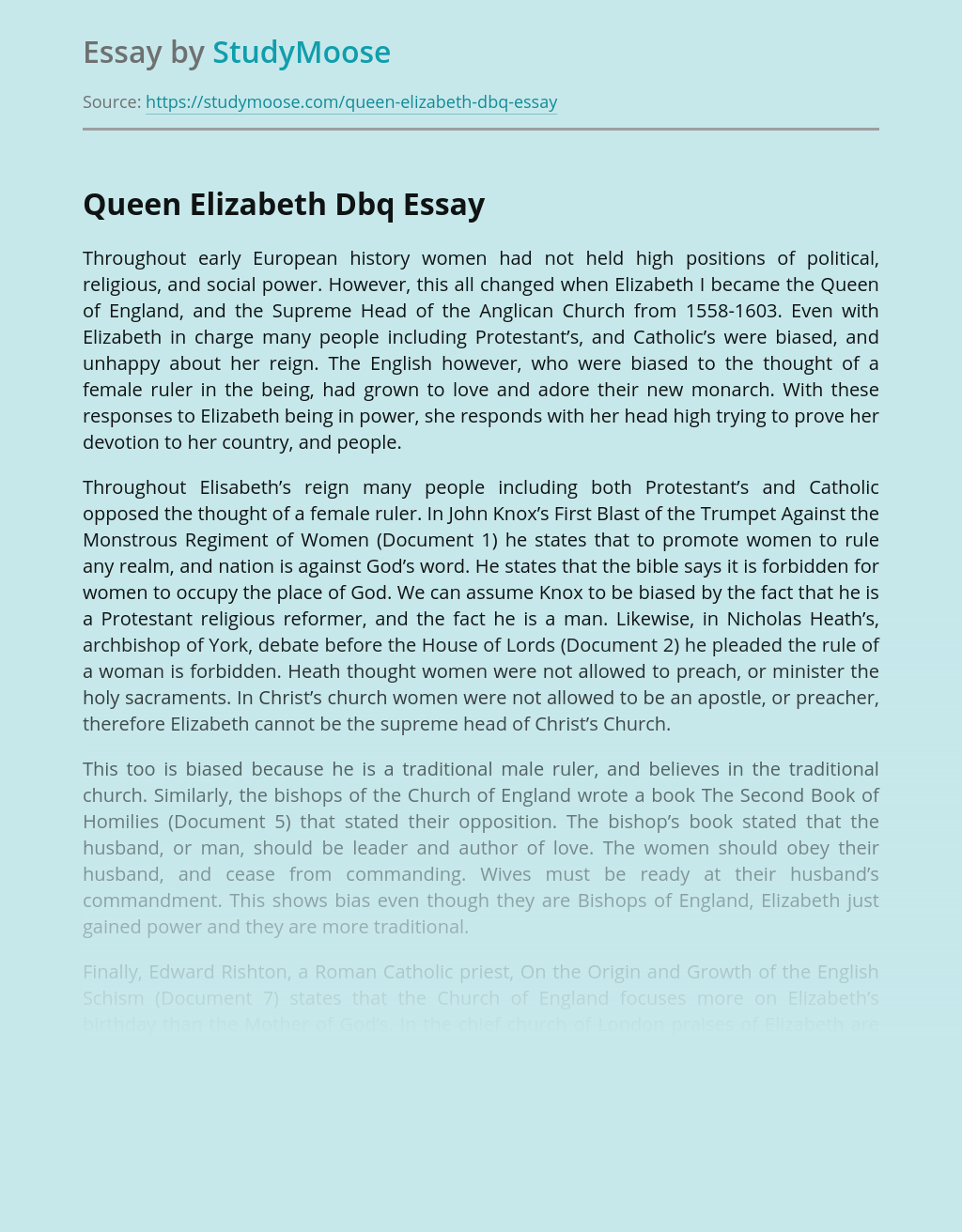 “Alone in a Mountaintop” Summary

Rate this post You will be playing the part of Romeo in my adaptation of Act 1 scene 5 of ‘Romeo and Juliet’. In order to play the part effectively it is vital that you understand a number of things about Romeo’s character and the play and how I wish you to act the role....

Rate this post CONSCIOUSNESS It’s very easy today right to use information due to coming in of social media everywhere in the world, no matter how the information size is like but properly are able to digest and communicate from one person to one another. We quickly be made informed or aware of different issues...

To Sir With Love by E.R Braithwaite - Exploring Themes - Racism

Rate this post Q: Explore the theme of racism in the novel. Don't use plagiarized sources. Get Your Custom Essay on Queen Elizabeth – European history Just from $13,9/Page Get custom paper A: To Sir With Love, is a testimony, written by E.R Braithwaite. A book which centers on a teacher, who takes his occupation...