A 1954 ad for Lux Toilet Soap states, “Luscious is the word for Greer Garson’s complexion and she keeps it that way with Lux Toilet Soap. ” This statement is an example of how emotional appeal is used in the ad to grab the reader’s attention. The advertiser uses character appeal by including information about Garson’s success in the ad to make the reader want to use the product. Logical appeal is used when a refund is offered to leave the reader with no objections to trying the product.

The Greer Garson Lux Toilet Soap ad was effective in raising product awareness and profits due to its usage of these appeals. Garson is pictured against a white background with a vine of grapes in hand in the ad. Purple is the color theme here, as Garson’s eye makeup, necklace and grapes are of this color. This gives the ad a sense of sophistication, warmth, luxury and even a little mystery.

The color pink draws the reader to look in the bottom right corner of the ad, where a Lux Toilet Soap wrapper reveals the bar of soap. This completes the attraction, femininity, and smooth texture of the ad. The image and larger-sized text are present in the advertisement to appeal to the reader’s emotion of craving for Garson’s flawless skin.

Women of this time were open to ideas on how to look as beautiful as possible. This could have been to succeed in their careers or simply to please a man.

Looks play a large role in any aspiring actresses success because she is trying to talk people into casting her for roles. In addition, having and taking care of a family was a very important part of women’s lives. They had to look their best in the hopes of getting a husband. This advertisement had their solution and informed the readers to use Lux Toilet Soap to get that desired look. If the picture of Garson wasn’t enough to get the reader to find character appeal in the advertisement, there is also smaller blue text at the bottom of the ad informing them of her credentials.

The ad states, “Besides being beautiful, Greer Garson is intelligent (she’s lectured Shakespeare), talented (probably won more awards than any other film actress)… ” There is also a statement at the top of the ad promoting a movie Garson most recently starred in, “Her Twelve Men. ” The ad then goes on to state her insistence on the use of Lux Toilet Soap in her home and dressing room, as well as the statistic “Greer’s used Lux for years now-she believes in it, like 9 out of 10 Hollywood stars do.

” This information about Garson’s career leads readers to trust in her belief of the soap’s effectiveness. It suggests that the reader should want to use the Lux soap because successful and beautiful people like Garson do. If it plays some part in Garson’s success, then the reader might have that same luck with life as well, after using Lux soap. As the reader continues through the text, the final appeal is utilized, logic. The ad states that “Miss Garson’s luscious complexion is as good a recommendation as we know of for using Lux Toilet Soap.

If you find Lux isn’t everything a good soap can be, we’ll return what you paid for it. Fair enough? ” After being presented this offer, the reader runs out of objections to trying the product. Reasoning tells them to buy it, try it, if it isn’t satisfactory, get a refund, and no loss would be incurred. The offer leaves the reader with a feeling of obligation to buying the product. It is important that the ad achieves this because it ultimately leads to higher sales profit. Lux Toilet Soap was not the only solution to uneven or imperfect complexion.

While it may have assisted in the look of the celebrity’s skin, it was more than likely one of the many remedies and products she used. The advertisers knew this and used the emotional, character, and logic appeals to distract the readers from reasoning. Consequently, the average reader made the mistake of not considering any of the other solutions possible, a price paid for by many readers’ wallets. References Lenssen, P. (2010). VIPS/ Celebrities in Ads of the 1950s. Retrieved 09 04, 2012, from Vintage Ad Browser: http: //www. vintageadbrowser. com/celebrities-ads-1950s. 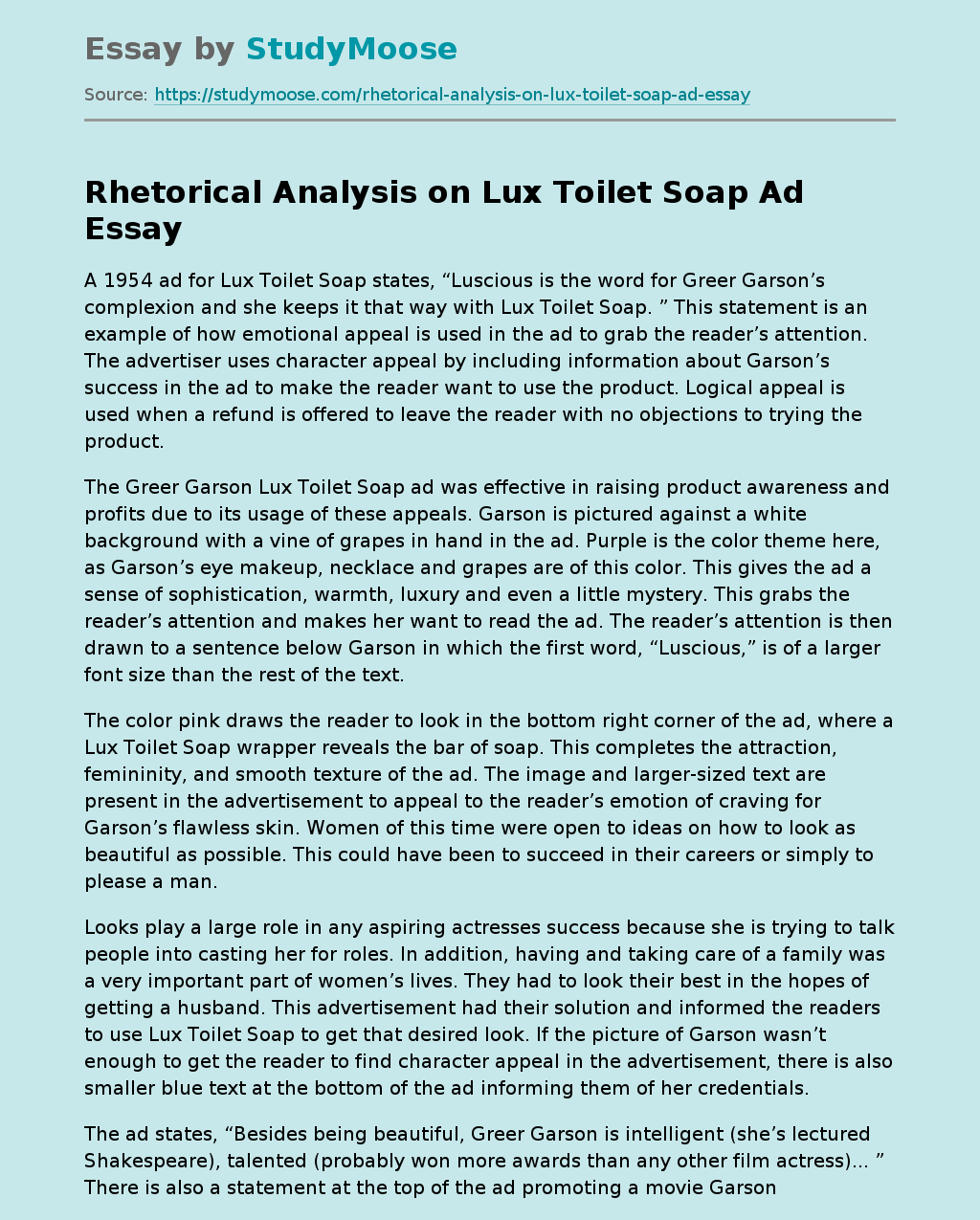