Rhetorical Analysis on "An Elementary School in Slum

The poem “An Elementary School Classroom in a Slum” by Stephen Spender, begins with a stanza depicting the worrying condition of the students in elementary school. As the poem extends further, Spender points out the corruptions in the Government and accuses it for paying little attention to children’s education and health conditions. He argues that the children should break through the confinement of slum, and embrace the beauty of nature. In the slum, Children do not have pleasant moments; they are far away from the “gusty waves”, and far away from the fields and playgrounds that supposed to accompany them along their childhood memories.

Don't use plagiarized sources.
Get Your Custom Essay on Rhetorical Analysis on “An Elementary School in Slum Just from $13,9/Page

They also do not have healthy bodies. A simile compares their hair to “rootles weed”, which shows that the children are severely malnourished, and are not taken care of. The boy is “paper-seeming”, and “of twisted bones”. The “tall girl with her weighed-down head” implies the fact that she might be looked down by others, and she is physiologically and psychologically fatigue.

However, there is “one unnoted, sweet and young” kid, at the back of the classroom, whose “eyes live in a dream, of squirrel’s game. ” We can see a glimmer of hope from this sweet kid, however, we are not sure if he is simply lost in the “squirrel’s game”.

The school is poorly equipped with donations such as Shakespeare’s portrait that decorates on the “sour cream walls. ” The picture of “cloudless at dawn, civilized dome riding all cities” is in sharp contrast to the dusty sky and shabby building of elementary school in reality. The kids’ future is painted with a fog under a “lead sky. ” The depiction of turbid sky created an atmosphere of despair and hopelessness. Not only the children’s future is foggy and blurred, but also their lives are monotonous and insipid, “far far from rivers, capes, and the stars of words. The children are confined to the school in slum as well as their imagination. William Shakespeare, the greatest playwright and poet in English language, is “wicked” to them, because they cannot appreciate the splendidness of language. And “the map is a bad example, with ships and sun and love tempting them to steal. ” The map gives children the taste of charming nature; however, instead of igniting the light of hope, it falsely tempts the children to acquire their goals even at the cost of stealing. They live in “cramped holes”, a limited and narrow space, with “slag heap” all around them.

Their study environment and living conditions are horrible, that they cannot maintain healthy body, let alone receiving appropriate education. Their future is like “mended glass,” foggy and blurred, full of despair. The school only operates when “governor, teacher, inspector, visitor” come to observe, so it does not provide serious teaching. Consequently, “this map becomes their window and these windows that shut upon their lives like catacombs. ” The slum limits the students’ horizon, like catacombs, and the maps are the only way for them to see the world outside.

They live in a dream that can never come true as long as they are still in the slum. At last, the poet envisions the students break through the confinement of slum, and finally they can embrace the beautiful nature, that was once on the map but far away from them. Spender harshly criticizes the government’s nonchalance towards the poverty-stricken children, and he appeals to all the people to pay more attention to the children and help ameliorate their education and health conditions. So that they can “show the children green fields and make their world run azure on gold sands, and let their tongues run naked into books. ”

Rhetorical Analysis on “An Elementary School in Slum. (2018, Jun 18). Retrieved from https://studymoose.com/rhetorical-analysis-on-an-elementary-school-in-slum-essay 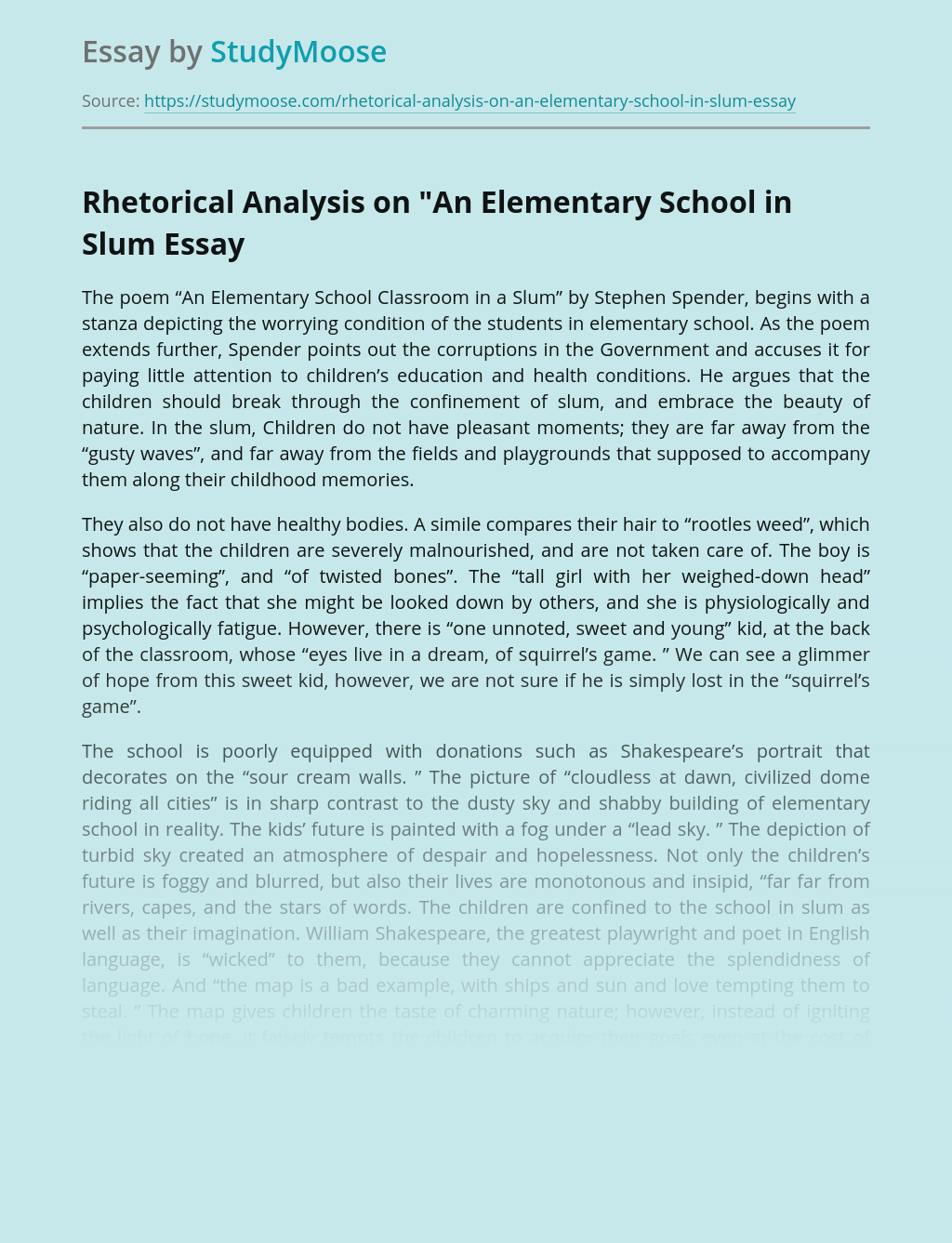 My Journey to Literacy

Rate this post I came from China to live in United State as a resident. Literacy sounds more important to me and became a life issue. I did have my literacy which is in Chinese. When the time I immigrant here. America use different culture and literacy. I have to say I got stuck sketching...

Rate this post Introduction There is so many reasons and so many ways that education can benefit people all around the world. It is stated that schooling for 1 year can increase one person’s income up to 10%, and that is only with 1 year of education!. Education makes people healthier by arming them with...

Get Essay
Should Parents Give Children Freedom?

Rate this post “Parents must learn to raise their sons and daughters on a good path, and they have responsibility for the behaviors of the kids “.This is speech from Arabic culture. The priority for parents is to educate and discipline their children. Children need some freedom to build their self-confidence that parents see their...

'The Lesson' by Roger McGough

Rate this post ‘The Lesson’ by Roger McGough and ‘Comprehensive’ by Carol Ann Duffy both discuss the violence in schools in their poems. ‘The Lesson’ is a more visually violent poem whose bloodthirsty villain is infact the teacher, whereas the characters in ‘Comprehensive’ tell us about the problems and racial tensions in their schools without...

Rate this post In Dead man’s path, there is a new headmaster who is educated and over ambitious and wants to turn his under-achieving school into a modern, top quality institution. He says “everything shall be just modern and delightful”. There is an old path that the villagers use to communicate to spirits and for...

Rate this post Those could include students who do not perform well in a specific subject area, do not show interest in gaining qualifications or perhaps are limited by poor language skills or culture from doing well academically at school. There have been many explanations for low attainment and some of them include: * Natural...

Rate this post Homeless Youth of ChicagoThe documentary Homestretch documents the lives of three homeless young people Roque, Kasey and Anthony. They strive to finish high school and make a better life for themselves. Each goes through the turbulence of their emotional growth as their lives continually shift. The documentary shows the battle that homeless...

Rate this post In the season of autumn, A shy and terrified student was enrolled to an all-male senior high school at elite boarding school Welton Academy named Todd Anderson. He is assigned to as roomates of the one most promising student at Welton Academy, Neil Perry, and as his roomate Todd is rapidly establish...