When people hear elementary school, there are a lot of different things that might come to mind: holiday parties, end of the year kickball games, the book fair and the class store. But for me and a few others that attended Beck Centennial Elementary one memorable event was the fog machine.

It was May 13, 2016. The entirety of the fifth-grade class was practicing for an upcoming musical performance. We were about half way through when Mrs. Burris, the music teacher decided she wanted to use a fog machine during our performance to make it more dramatic.

Don't use plagiarized sources. Get your custom essay on
“ Elementary school ”
Get custom paper
NEW! smart matching with writer

About ten minutes after the machine was set up, while practicing our lines we heard a few students and helpers complain about having headaches “Mrs. Burris, my head hurts.” Those people were sent down to the office and once they left, the rest of us without headaches continued with our practice. We were about ten minutes away from finishing when someone passed out. Once the teachers made sure the student was ok we were lead out of the gym in which we were practicing and told to wait out in the hallway.

My teacher called the police and we waited in the hallway until they arrived. After about twenty minutes or so the fire trucks and police arrived to see investigate the situation. While they were investigating, the entire school was asked to stay outside and wait until it was clear. It was so chaotic I couldn’t hear myself think. The only things I could hear were

“I want my mom!” and “I’m scared” there were very few of us who were calm, myself included.

We were asked to try to calm everyone else down, so we could hear what the fire chief had to say. According to the fire chief “the machine wasn’t set up properly and leaked.” Once he was done talking we were given the ok to go back inside. However, we didn’t continue the school day but very slowly we went into the nurse’s office and they gave us a quick check up to make sure we were ok and had no dizziness or headaches. If we weren’t sick and feeling completely fine, we were bussed to Eisenhower high school where we waited for our parents to pick us up. On the other hand, anyone who had even the slightest headache was taken by ambulance to the hospital.

Although this didn’t have any life altering effects on me, I will remember that day for the rest of my life.

There were some ways this experience had a positive impact and some ways it had a negative impact on me and my classmates. A positive was that we had the rest of the day off. Another positive was we got on the news and that was exciting. A negative was some of my friends got sick and were hospitalized. Some were there for a few days, others for an hour or two.

This experience taught me a few things. Even though you think something bad may never happen to you its entirely possible that anything can happen to anyone. The one thing you should do in a high intensity situation is stay calm and try to help others do the same. The more people that are afraid and having panic attacks the more chaotic the situation gets. But the more people that are calm the more calm and less chaotic everything is and when everyone’s calm the people in charge have an easier time explaining what to do. If everyone around you is afraid, you need to be the role model for them and help them out tell them it’s ok. Another thing I learned is when setting up machinery make sure it is set up correctly to avoid any problems

When I think of elementary school I think of lots of things like: end of the year kickball games, holiday parties and many other fun activities, but one that is particularly memorable to me is the fog machine. 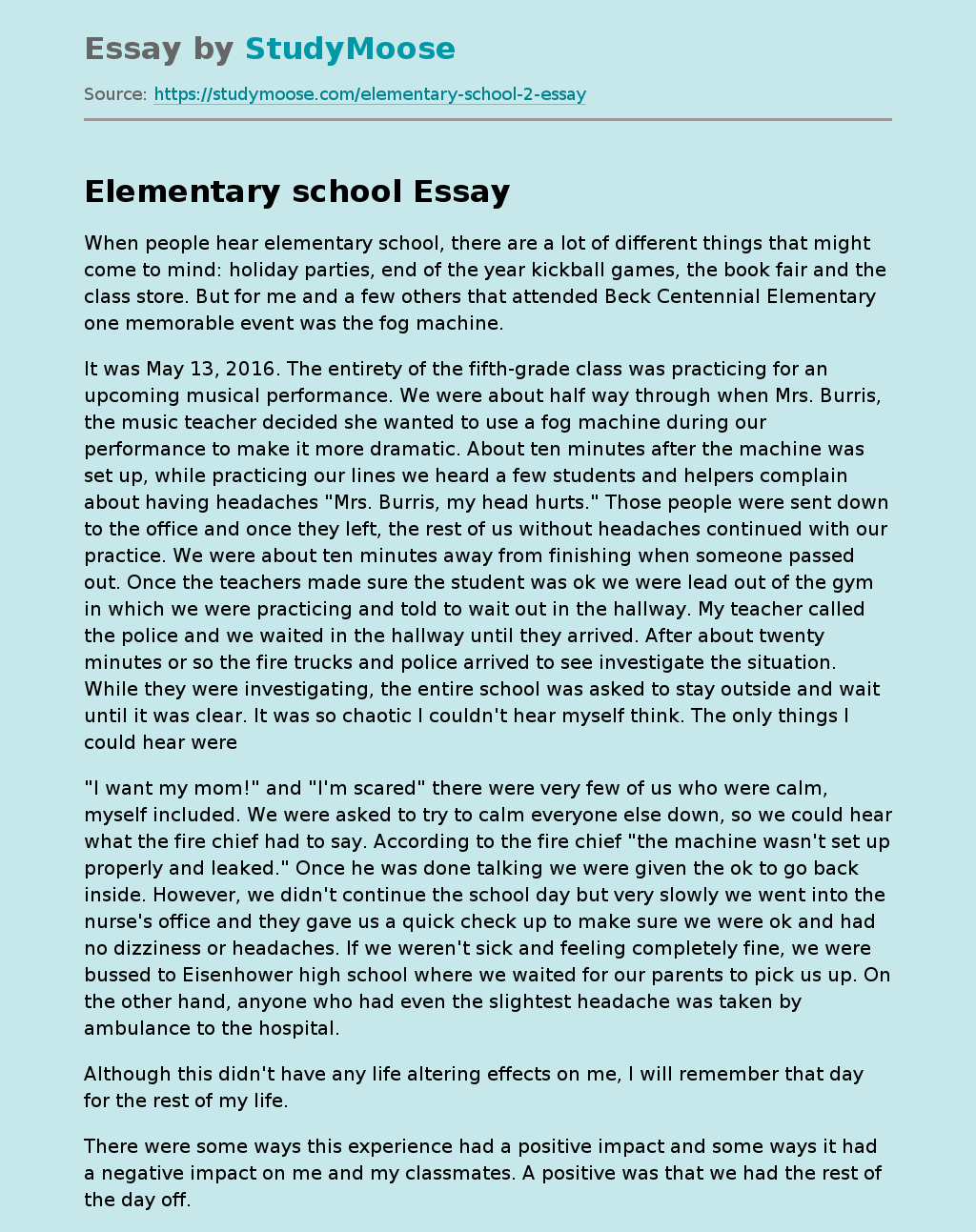