More than 10% of the country’s Gross Domestic Product (GDP) and approximately 8% of the workforce are in the Indian retail industry. India is the fifth most important retail destination in the world. India’s retail market, driven by income growth, urbanization and attitude shortages, is projected to almost double from US$ 600 billion to US$ 1 trillion by 2020 by 2015. Although the overall retail market is expected to grow at 12% per year, today’s trade would grow at 20% per year twice as fast, with traditional trade at 10%.

Don't use plagiarized sources. Get your custom essay on
“ Retail Sector or Offline Retail ”
Get custom paper
NEW! smart matching with writer

Online retail is growing at an amazing rate, although most people still prefer to shop offline. Online selling is significantly lower than running a traditional physical store, as you don’t have to pay for a physical space and the ongoing costs. Customers tend to appreciate the convenience of e-commerce, as they can browse and deliver the products directly to their front door. According to redbrain.com information, people spend as little as 28 seconds on some eCommerce websites, which demonstrates how time-efficient they are.

You can track customer interactions as a retailer accurately, giving information which can boost marketing efforts. Despite all these advantages, you will have to accept that you often need more budgets and staff than traditional brick and mortar shops to inform our customers of your existence. Significant interactions can also be difficult to build, since there are no face-to-face interactions.

For consumers that cannot be matched in customer experience, offline remains the most popular shopping channel. With offline shops, you can create a creative and unattainable online experience for your customers.

Trade transitions can also be accessed from offline shops to make your target market visible and help you build your brand. However, despite the more positive developments, the setup and running costs will be more expensive, and more money will be paid out every month. It may also be a major problem for a physical store not to pick the right location, partly because so many shops around the world must close up, especially with the growth of e – commerce stores.

Retail is expected to record a 5.3 per cent CAGR of USD 23.460 billion in 2017 (2018-2023), up to a total of USD 31.880.8 billion in 2023. There are products on the market like food, clothing, furnishings, jewellery, etc. The shops can, in addition, be classed as convenience stores, retailers, internet shops and many more. Our study covers North America, Europe, Asia-Pacific, Latin America, and the Mediterranean East & Africa geographically only.

In Europe and North America, the retail market is mature and highly competitive. The Asia-Pacific, Middle East and Latin American economies, on the other hand, were instrumental in driving market growth. A key indicator of the health of the retail industry has been consumption expenditure, typically about two-thirds of GDP. In addition, online shopping has increased its strength. In addition, the growing penetration of smart phones throughout the country leads to e-commerce. The Internet of Things (IoT) is also reorganizing the retail sector. The industry is being revolutionized. The price variation between brick & mortar and online shops can nevertheless challenge retail market growth.

India is one of the fastest growing retail industries in the world. The India retail industry is projected to increase from 795 billion dollars in 2017E to 1200 billion dollars by 2021. India is the world’s fifth most popular retail destination. In terms of per capita retail stores, this country is among the world’s highest. The Indian retail industry is growing exponentially, with retail development not only taking place in major cities and metropolitan areas, but also in Tier II and Tier III cities. Other factors driving growth in India’s organized retail market are healthy economic growth, a change in demographic profile, increased disposable revenue, urbanization, changing consumer tastes and preferences.

The people of India take an enormous amount to online shopping. Retail online sales are expected to increase by 31 percent to $32.70 billion in 2018. Online retail revenue is expected to rise by 2020 to US$ 60 billion, with an estimated nine per cent increase to 18 per cent in 2021, and India the world’s 3rd-largest consumer economic, reaching US$ 400 billion in consumption by 2025. by the year. India has been predicted to become the 3rd largest consumer economy. Increasing foreign and private participation has helped the Indian retail sector to boost its participation. The competitiveness of India’s price attracts major retailers to use the company as a source.

The people of India are shopping online enormously. Online retail sales are projected at $32.70 billion in 2018 to increase by 31 percent. Online retail revenues are projected to rise to 60 billion dollars by 2020, estimated at 9% by 2021 to 18%, while India will become the third largest consumer in the world, achieving 400 billion dollars of consumer consumption by 2025. By year. By year. The third largest consumer economy was predicted to become India. The Indian retail sector helped to enhance its involvement with increasing foreign and private participation. Indian price competitiveness attracts large retailers as a source for using the company.

If the right set of products and prices are applied, rural markets show a high growth potential. Connectivity to such towns is now becoming easier with increasing investment in infrastructure. In such high potential markets, the retailer can therefore gain more reach. There is an increase in the number of private labels in the organized Indian retail sector. The share of the strategy on private labels on the U.S. and UK markets is 19% and 39%, and the share on India is only 6%. This gives the home-grown label a huge opportunity to expand its foundation.

The competitiveness of India’s prices attracts major retailers to use this as a source of products. Many international retailers are increasing their procurement from India to set up own wholly – owned / managed procurement and buying offices from third parties.

Since the contemporary retail sector in India is reflected in large shopping malls, multiplex centres and enormous complexes offer shopping, recreation and food under one roof, the concept of shopping has changed about format and buying behaviour in India, which has led to a revolution in shopping. This has also contributed to large-scale immobilization investments, with key national and world players investing in infrastructure development and retail business construction. The trends that drive retail industry growth in India are Low share of organized retail property prices Immovable income increase and customer demand Increase in the cost of luxury goods (CHART)

The increase of the young working population is another credible factor for the retail sector in India. In India, heavy wages packages, nuclear families in urban areas, increasing working women and emerging services opportunities. The main drivers of the Indian retail sector, which now boast almost all their preferences-appliances, accessories, electronics, cosmetics and toiletries and home & office products, travel, leisure and many more-were these. These factors have become increasingly important. With this the retail sector in India is witnessing rejuvenation as traditional markets make way for new formats such as departmental stores, hypermarkets, supermarkets and specialty stores.

The configuration of retailers in India is developing fast as shopping centers in large cities are becoming increasingly familiar. The cities of Tier II no longer lie in the race when it comes to the development of retail space in malls. The project shows 220 shopping malls, with 139 malls in metro stations, and the remaining 81 in the cities of Tier II, if development plans are considered until 2007. State governments like Delhi and the National Capital Region (NCR) are very keen to allow land use in commercial development, increasing the availability of land for retail space, making the NCR 50% of malls in India.

ONLINE-TO-OFFLINE: AN INTEGRATED APPROACH TO RETAIL

The combination of digitalization and e-commerce has influenced the retail landscape considerably, where online distributors are increasingly prominent, and outlets are traditionally working hard to compete in online markets. Despite this online explosion, McKinsey & Company estimates that in 2020 about 80 percent of retail sales will still be in brick and mortar stores. The potential attraction of Offline sales is so strong that more retailers realize the benefits of having a physical store and move in this direction, as competition stiffens, and retailers look for new avenues of growth.

One of the latest examples is Amazon. The experiments of the company with Amazon Go highlight a point that is very interesting for other online retailers who are interested in playing brick-and-mortar games: online retailers are familiar with the online buying practices of their customers.

Offline companies are sound and reliable, although their reach is limited. Online companies may be large-scale but are typically at higher risk because of increased competition. This is an attractive choice for start-ups due to their relatively little cost to online business. Overall, online business is much simpler and cheaper and with an online company that does nothing, compared to running the same business as an offline company, you will have much less to lose.

A key indicator of performance (KPI) is defined as a method for measuring quantifying objectives for performance measurement. These include measuring the turnaround in inventories, inventory accuracy, dollar expenses for urgent purchases, internal and external quality defects, inventory stocks, customer satisfaction levels and others listed in the KPIs matrix, as compared with the overall purchases of the company. Management makes then periodic measurements (daily, weekly and/or monthly) and analyses them by trend analysis, benchmarking and critical path analysis (PERT).

Many firms only use a few KPIs to measure their results. The performance of stores and MROs is not always measured. The old statement, however, that you cannot know where you were or where you went, is often true if you do not measure.

Retail is one of the most competitive industries, with a strong focus on sales growth and customer retention. If a retail organization is to stay top, it needs to know all about its business.

When measuring their business processes or objectives, retail stores must select the right KPIs. Each KPI should be intended for a purpose, be quantitatively or qualitatively measurable, have a realistic goal, relate to a store strategy and be measured in a timeframe. One example is that by the end of the month the volume of sales increases by 10 per cent. The retail company will then measure its monthly sales volume and compare the 10 percent increase to the target.

In the end, retail stores want their sales to grow and make more money. Although there are numerous KPIs related to sales, the majority of retail stores use some basics. The three simplest ones are gross profit, sales and cost of goods sold. The profits of the store are measured directly. Also, commonly used are average purchasing value and sales per segment. The best way to place goods in the store to increase sales is through sales per square foot helps shop managers identify how many buy-outs are actually done for each customer that walks into the store. 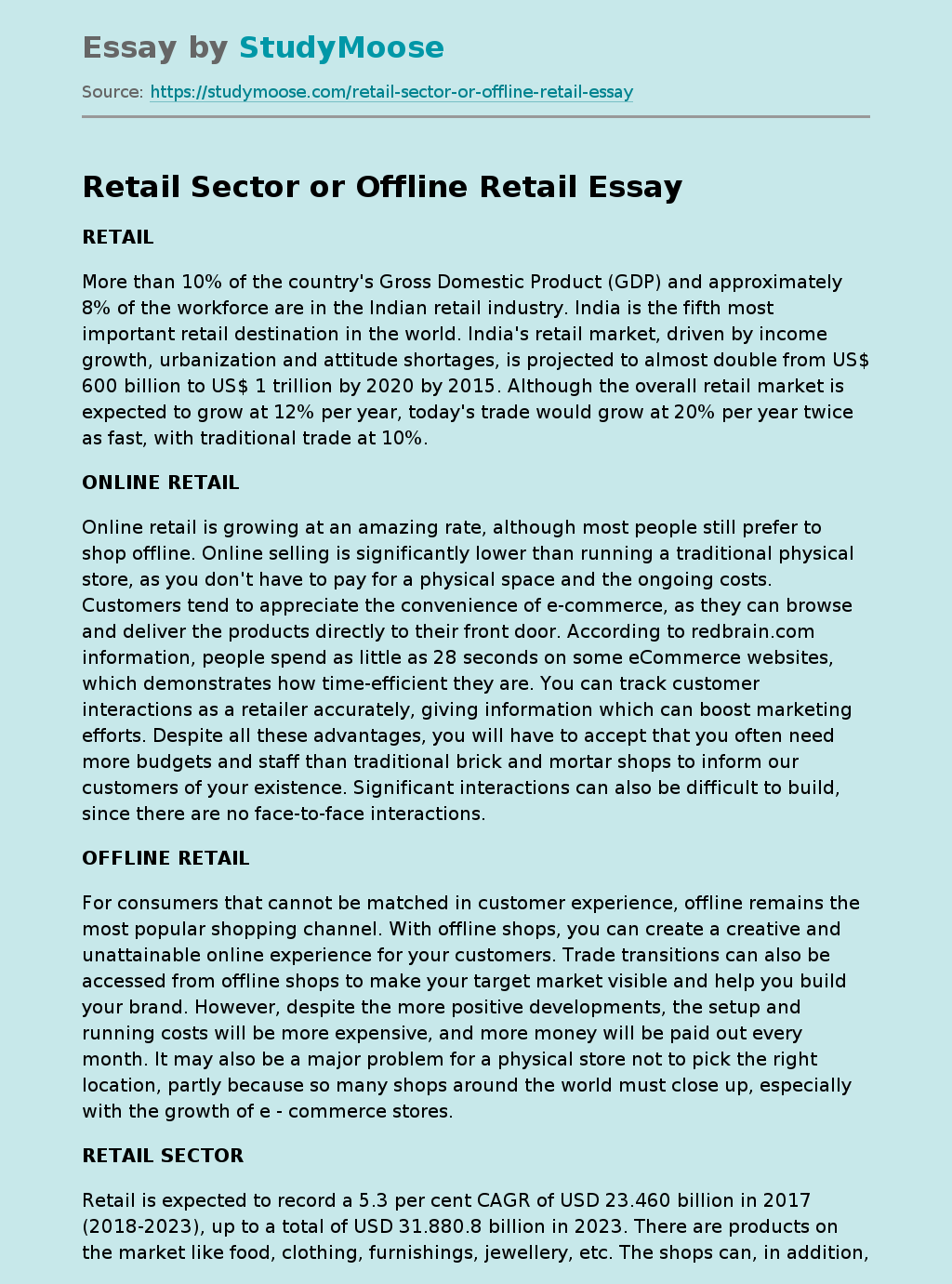