The Epic of Gilgamesh is very complex, but it is also considered one of the greatest epics in the Western literature. In the story we can find several contradictions, from which I chose the friendship between Enkidu and Gilgamesh.

The story of Gilgamesh starts off by the description of Gilgamesh, “the strongest one of all,the perfect,the terror” (Ferry 4). Initially, Gilgamesh appeared as someone who isn’t able to have feelings nor relationships. Although he fought with Enkidu, once Gilgamesh tested his opponents strength, he decided to let him into his world becoming best friends.

Some people would say that Gilgamesh is using Enkidu for his journeys, which we can see when he allows the hunter to take his prostitute and bring him. He did this for nothing in return, where we can notice that he already had a plan for Enkidu. Whilst this is correct in some points there are other things involved that prove differently.

In the beggining of the story, Enkidu was made by the goddess Arura in order to punish Gilgamesh with the same wild and stormy heart as Gilgamesh has.

Having this into consideration, Enkidu owes life to Gilgamesh, or at least shall be thankful to Gilgamesh for his own existing. Also, the people shall be grateful for their city, because Gilgamesh is the one “who opened passes through mountains; and who dug deep wells on the mountainsides;” (Ferry 4). This indicates the strength of Gilgamesh and values he had in the city. Once friends, Enkidu has started living differently, not like the wild beast he used to be.

Enkidu is lucky for the friendship he has gotten from Gilgamesh, but it has also costed him. Gilgamesh has always wanted immortality and fame in the city, and because of his wish Enkidu is the one who has suffered.

Before going to Cedar Forest, Enkidu is the one who was discussing with the Elders about the dangers of the trip. One doesn’t notice anywhere in the text how Enkidu knew about dangers of the trip and the keeper of the Cedar Forest, the demon Huwawa. This is the privilege that Gilgamesh does not have. Furthermore, throughout the trip, Enkidu is the one who was communicating with the God of the sun, their protector, Shamash. Aditionally, the Elders are advicing Gilgamesh to let Enkidu go first and ” find the water to quench” (Ferry 19) his thirst and offers to the God. This is a big advantage/value for the Enkidu, since he is the one communicating with the Gods and able to know the road. Further in the story, their friendship becomes stronger, once they share their strenghts and weaknesses, courage and fear.

The most intriguing thing in the whole story is the heroic side of Enkidu. The true friendship and loyalty to Gilgamesh are his biggest values. Once in fight with the demon Huwawa, Gilgamesh was scared of the speed Huwawa was possessing and, once Gilgamesh saw his face, he hid away, in some cases even weeped. In each time, despite the dangerous cicumstances, Enkidu had quick mind and knew what he had to do, which is show Gilgamesh he was not alone, “Two people, companions, they can prevail together against the terror” (Ferry 26). Going futher into the story we are finding out that, because of killing Humwawa and Bull of Heaven, the Gods have decided to punish Enkidu,although God of Sun Shamas tried to save him. He had the protection of the God, because he was compressed into this trip. Initially, the mother of Gilgamesh, Rimat-Ninsun, just before the trip has hit the biggest weakness of Enkidu, “Enkidu has neither father nor mother;” (Ferry 13).

This proves the fact that he had no choice left because he was feeling worthless and there was no other solution but to go to this dangerous trip. Even at the end, when Enkidu knew he was destined for punishment, he did not have selfish heart, he accepted it and stayed loyal to Gilgamesh. This has me thinking, who is the real hero? By whose name should the book be named instead? By the great strenght and power Gilgamesh, or the loyal, great guide who turned into hero with his actions? Did Enkidu think he owed his life to Gilgamesh, or he did not want to go against the will of the Gods? Considering many tablets are not recovered, which made the text incomplete, there is complexity to this friendship and many questions that need to be answered.

Here, after Enkidu dying, we also get the feeling of Gilgamesh being selfish, and not saving his friend. As soon as Enkidu has died, and Gilgamesh saw a worm falling out of his nose, he saw the reality where this can happen to him too. He was determined to find immortality. Although on a new selfish quest, we can see his true grieving for a friend, a brother. Every individual Gilgamesh encounters with can see that he is full of sorrow. This is where the prevalent repetition happens. At first, I thought it was a literary element only. However, how the story grew, the significance of the repetition grew also. It became the emphasis of Gilgamesh’s sorrows. It keeps being repetead to keep our mind on the soft-hearted Gilgamesh, who truly grieves for Enkidu, who undoubtfely deserved it. It is engraved in our memory that he is truly lonely and has lost someone who was a big part of his life. But even so, that little part in the back of my mind is still set on Gilgamesh not urging for Enkidu’s sparing.

In a conclusion, friendship between Enkidu and Gilgamesh is far more than important in this great epic. The contradictions are tempting to discuss, and because of the missing tablets, there will always be some questions. However, although Gilgamesh did not get his immortality, this prominent story, through many centuries, definitely has. 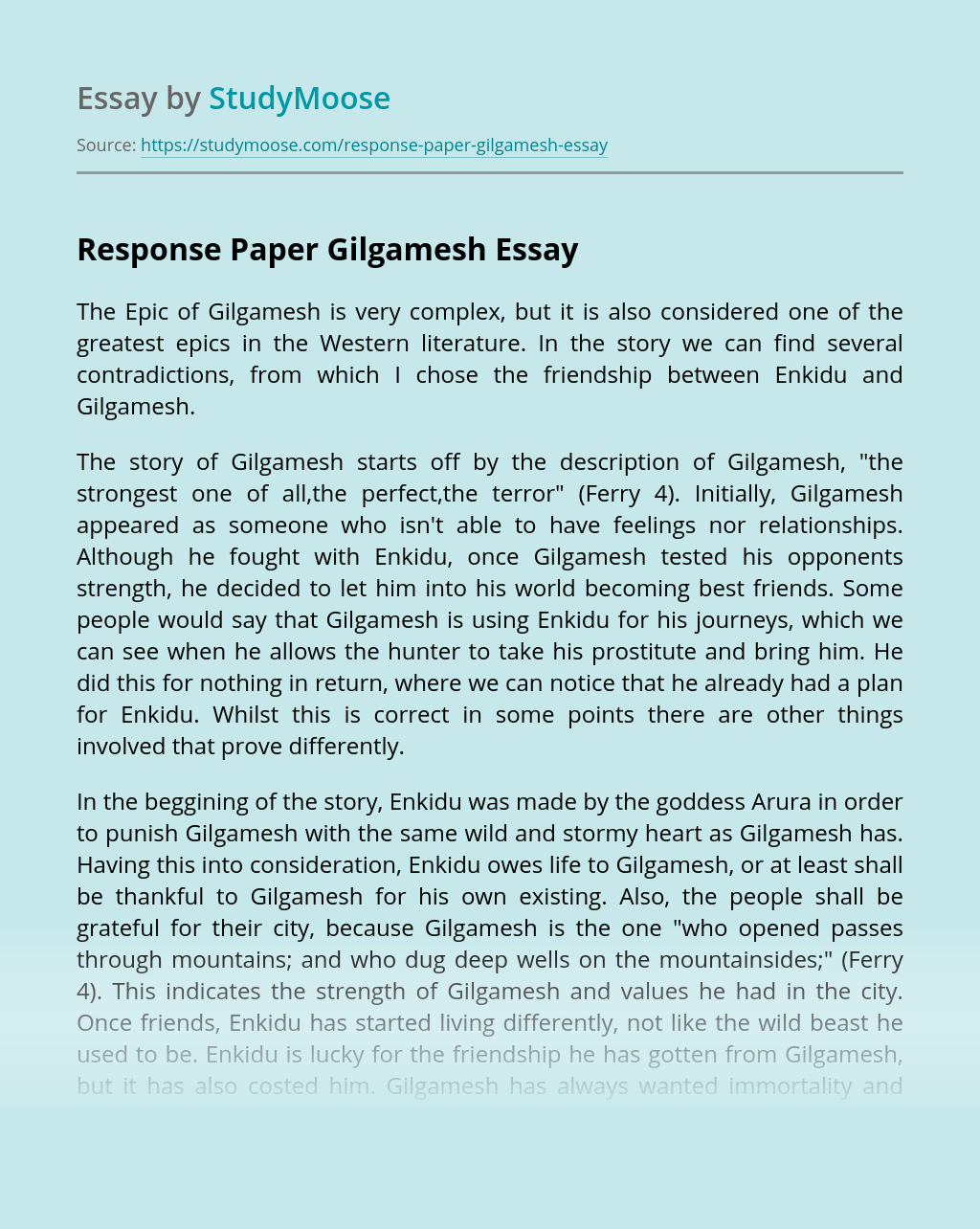