Don't use plagiarized sources. Get your custom essay on
“ Republic Acts 9163 & 7077 ”
Get custom paper
NEW! smart matching with writer

Under these reserve commands, the Chief of Staff of AFPRESECOM was also created. To meet the mandates of the law, the General Headquarters of AFP activated AFPRESCOM on April 01, 1993 and re-aligned the personal and facilities of the defunct Metropolitan Citizen Military Training Command (MCMTC) to oversee the Reservist Program.

It was the duty of this core group to implement in full force and effect the RA 7077 law and to provide administrative control and supervision over all the reserve units established under this act whose services and utilization are national in scope.

R.A. 9163 or National Service Training Program (NSTP) is a program aimed at enhancing civic consciousness and defense preparedness in the youth by developing the ethics of service and patriotism while undergoing training in any of its three program components namely ROTC, Literacy Training Service and Civic Welfare Training Service.

Its various components are specially designed to enhance the youth’s active contribution to the general welfare. On the other hand, R.A. 7077 is a program that provides the base for the expansion of the Armed Forces of the Philippines in the event of war, invasion or rebellion; to assist in relief and rescue during disaster or calamities; to assist in socioeconomic development; and to assist in the operation and maintenance of essential government or private utilities in the furtherance of the overall mission.

3. Which is more applicable and appropriate between the two laws on the present situation of our country? Why?

In my opinion, the more appropriate and applicable law is the R.A. 9163. It is because our country faces fewer wars due to the presence of the ASEAN committee and other peace treaties. We no longer find war as a solution to solve problems between nations. Furthermore, R.A. 9163 incorporated some elements of R.A. 7077 such as military training and improved the law by adding Literacy Training Service which trains students to become teachers of literacy to out of school youths and Civic Welfare Training Service which is devoted to improving health, education, environment, entrepreneurship, safety, recreation and morals of the citizenry. 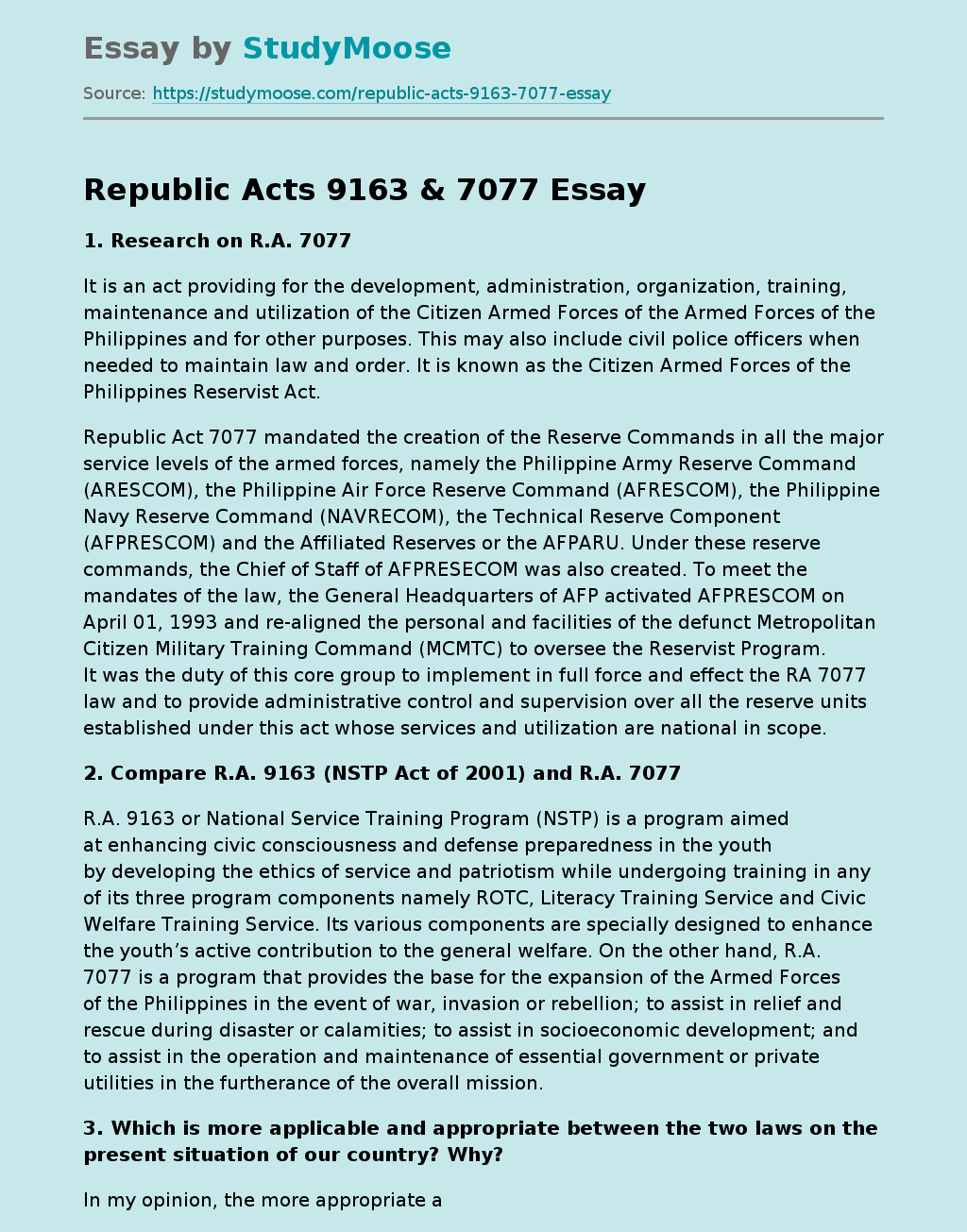