Morals usually are the guiding principles in just about everybody’s life. Humans generally tend to do what is considered to be “right” and astray from what is “wrong”, but in some cases, people choose to do what is considered “wrong”. However, people believe that children should be dealt with much more lightly because they’re not adults yet. On the other hand, I disagree that children should be exempt from punishment, and I fully agree with the four justices that believe a child who commits a heinous crime should be punished with a prison sentence of life without parole.

Don't use plagiarized sources.
Get Your Custom Essay on Juvenile Justice Just from $13,9/Page

The eighth amendment bans cruel and unusual punishment to protect its citizens. If a child commits a murder and goes unpunished, is that not a cruel punishment for the victim’s family? In Jennifer Jenkins’ “On Punishment and Teen Killers”, she states that there is: “no regard to the impact on victims’ families”(10). The justice system is not doing its job if it is not getting justice for the victim’s family.

Therefore it would be unconstitutional for the law to not punish the criminal for their heinous crime. Additionally, there have been researches and studies conducted in order to answer why teenagers act the way they do. Research shows that the brain is the very reason for these children’s actions. In Paul Thompson’s article “Startling Finds on Teenage Brains”, he claims, “massive loss of brain tissue loss occurs in the teen years” and that it is, “only being lost in the areas controlling impulses, risk-taking, and self-control”(7). This may explain why children act in this horrific manner, but it does not give them an excuse to commit crime. A rebuttal to Thompson’s claim of defense would be Marjie Lundstrom’s article “Kids are Kids-Until They Commit Crimes”, when it points out: “they’re only kids. That is, until they foul up. Until they commit crimes”(4-5). Kids are kids until they choose to make an “adult decision” and commit a serious crime. Whether the criminal is eleven or seventeen, they are making a conscious decision to engage in a crime. Based on the premise that morals do not substantially change from young adulthood to adulthood, the offender should know that their crime is wrong. Thus, the
punishment should be mandatory as a result of the offender’s actions. Children should pay their dues, even if that means life in prison without parole. If crime is dealt with lightly now, it will only get worse as time progresses. A wise and responsible decision needs to be made so that society can have a more safe and secure future. 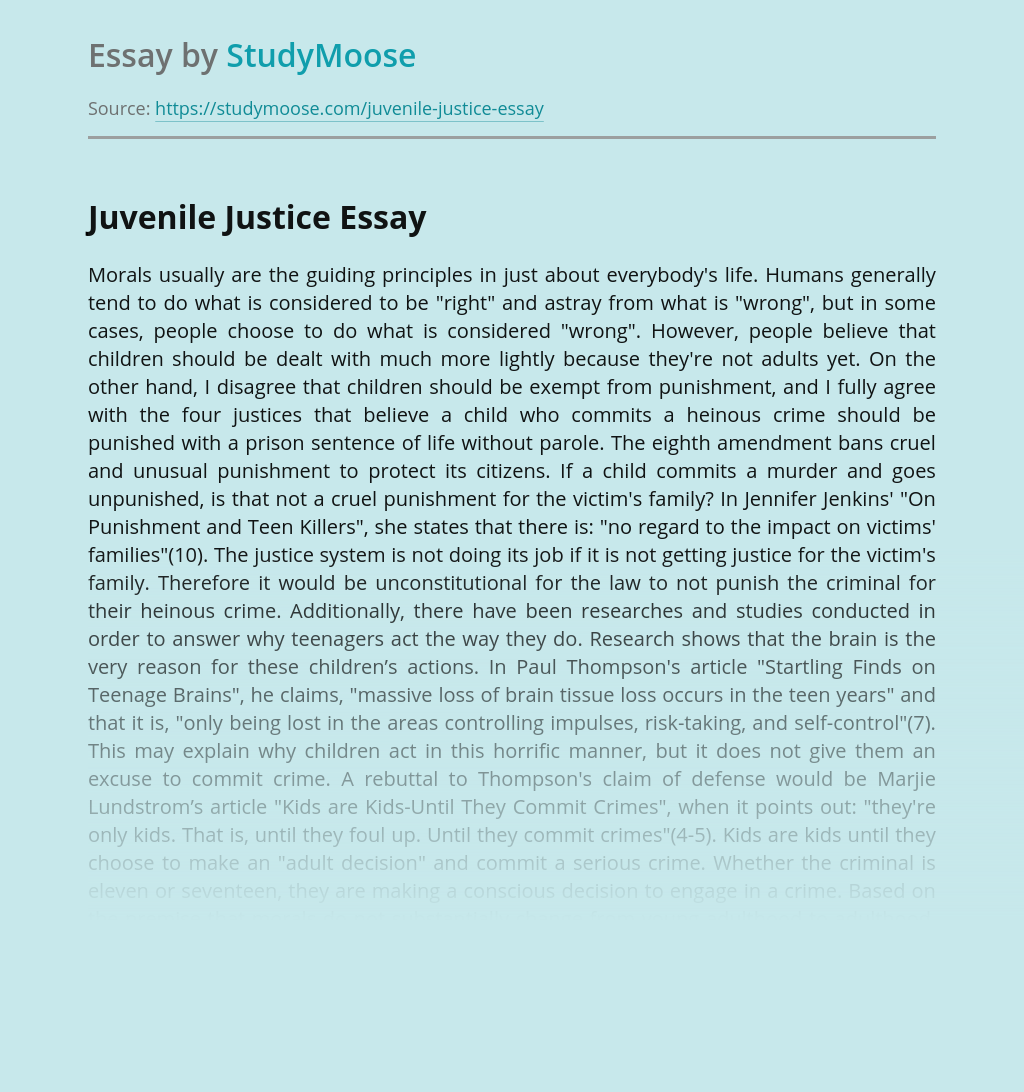 Within the past decade, a new school of criminology has come into being. I use the term “school” here in its somewhat figurative sense, to refer to a group of people held together by certain shared beliefs, teachings, and opinions; that is, I use it in the same sense as it was used of the... VIEW ESSAY

Gun Control Have you ever been involved in a home invasion? How did you protect yourself, or if this would happen have you thought about how you would protect yourself? This is a real concern in families’ minds across the nation. When I think of having a future family I think about how I would... VIEW ESSAY

The criminal justice systems in Australia and throughout the world depend on evidence to prosecute individuals presumed of a crime. Formerly, criminal detectives relied upon eyewitness represent their investigations though mental research reveals that eyewitness testament is not always precise and should not be used in the criminal justice system as a sole piece of... VIEW ESSAY

Piper Kerman is a Smith College graduate who is serving thirteen months in prison, from 2004 to 2005, for a drug trafficking and money laundering crime she committed nearly ten years before. For most of her entire stay Piper is placed in a minimum-security prison in Danbury, Connecticut. I am from Avon, Connecticut so because... VIEW ESSAY