The idea of representative bureaucracy is a relatively simple one; however, the nuance of implementation which accompanies the transition from theory to practice has resulted in a divergence of opinion regarding the usefulness of two models of representational bureaucracy: a “passive”‘ mode and an “active mode. ” Each of the modes demonstrates the attempt to generate a bureaucracy which will well-serve those whom it represents.

The first mode of representational bureaucracy: passive, emerges from the idea that a bureaucracy should be “the presence of a public workforce that reflects the demographic characteristics of the society it serves,” and that ” the idea of representative bureaucracy which reflected the “backgrounds of the citizenry and similar values and beliefs,” will enable “citizens to feel a connection with government,” (Sowa, 701).

Don't use plagiarized sources. Get your custom essay on
“ Representative Bureaucracy ”
Get custom paper
NEW! smart matching with writer

By contrast, active representational bureaucracy puts more discretionary power into the hands of administrators and enables them to take an aggressive rile in championing the causes of groups for which they are appointed to support. Active representational bureaucracy becomes a method “through which the interests of particular groups could be more actively pursued by administrators holding similar values,” and as such demonstrates a direct line of influence from groups to their representatives, (Sowa, 701)

The basic difference between the two modes is the idea of administrator discretion which is the active mode of representational bureaucracy, can use discretionary authority which is “directed toward more representative and possibly more equitable outcomes,” in bureaucratic services, (Sowa, 701).

However, the issue of whether or not minority needs are met by representational bureaucracy is the subject of considerable debate, (Sowa, 703). Central to the debate is the issue of administrative discretionary power. A significant amount of administrative discretion is argued for under the “active” mode of bureaucratic representation and the expected outcome is that administrators will function as vocal advocates with a measure of power on behalf of those they represent.

Studies cited in Sowa’s article point to evidence that advocates and administrators, in fact, do pursue discretion in tandem with their cultural identification and association with the cultural identities of those they represent. As Sowa’s article points out, “authorities governing an agency define work roles as a articular set of behaviors expected from those occupying a particular position or job”; so it is important that administrators identify as much with those they represent as possible, (Sowa,704).

In my opinion, Sowa’s article demonstrates, conclusively, that representative bureaucracy does, in fact, function better when the public workforce holds strong identification with the people it represents. Although no system is perfect, active modes of bureaucratic representation seem to yield demonstrable results, according to the ideas and evidence expressed in Sowa’s article. 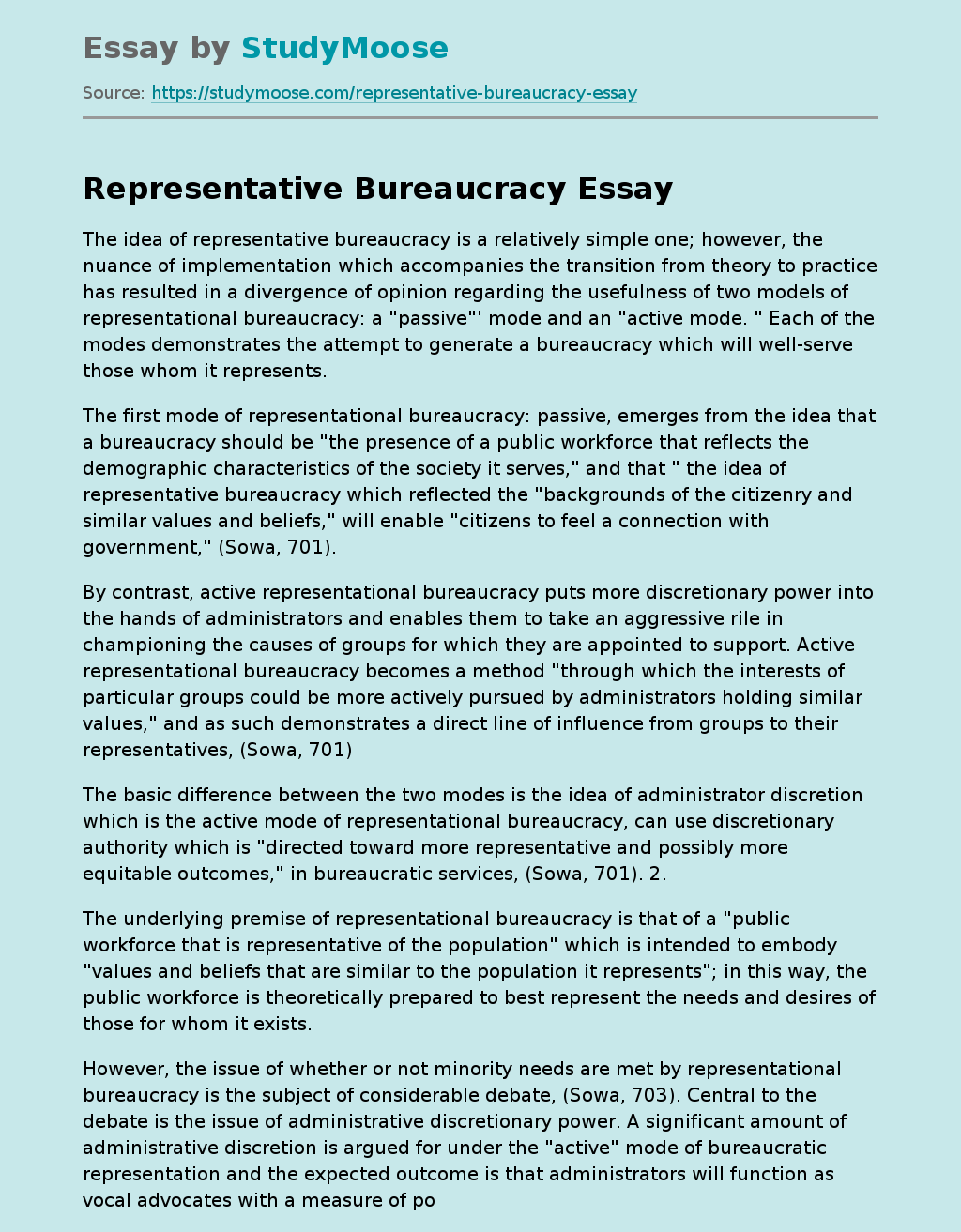