Representation of Gender in the Film The Crucible Essay

Nicolas Hytner has used a number of techniques such as camera angles, dialogue and music to represent gender through the film version of Arthur Miller’s The Crucible. This is evident through the study of the characters John Proctor, Reverend Hale, Judge Danforth, Elizabeth Proctor and Abigail Williams.

The film is set in the mid 17th century in the Puritan society of Salem. The Puritans are a group of people who take the Bible literally and very seriously. Law and religion was tied together so that sin became crime and visa versa.

Don't use plagiarized sources.
Get Your Custom Essay on Representation of Gender in the Film The Crucible Just from $13,9/Page

Salem was a place where pleasure and relaxation of any sort was restricted and people lived under rigid Puritan constraints that allowed no room for privacy. All power within the society was derived from biblical authority and the patriarchal views of Salem, thus the society was led by ministers of religion and the patriarchs, with women as the third class citizen.

Miller, reflecting his own 1953 context, is paralleling the Salem witch-hunt with the infamous drive by Senator Joseph McCarthy to expose ‘radicals’ and ‘communists’ in the USA.

Clearly, the term “witch hunt” has come to mean the slandering of innocent people using them as scapegoats for the things that are wrong in society. Discrimination against Muslims during the recent Gulf War and War on Terrorism illustrates the universality of the issue of witch-hunting.

With the context in mind, the representation of gender in Salem can be analysed. The tragic hero of the film, John Proctor, is presented as a stereotypical man of the late 1600s Salem. John is presented by Hytner as very much the moral centre of the film through the use of a variety of filmic techniques in the construction of his character. In the first scene he appears, his clothes are natural and earthy in colour and his movement while reaping is close to the natural rhythms of the earth.

This paints a picture of Proctor as a handsome masculine man, a worthy farmer doing an honest day’s work. The rhythmic reaping of the field gives a comforting feel and shows John’s confidence with his tools – a man used to hard work. The sunlight reflects off his face bathing him in some spiritual power. His children are out working with him giving the impression of a family man.

Images of Proctor are also painted in the scene in Proctor’s household and both male and female roles in the home and family are juxtaposed. John as the head of the family is blunt and abrupt to his wife which was representative of family life at the time. John is master of his house and shows his power when he shouts the word “Woman!” at Elizabeth. The single word establishes that John’s status is higher than that of Elizabeth and she must submit to his will. Proctor’s dominance is shown in the repetition of the words “I’ll think on it” and his slamming down on the table signifies the end of their argument. His male qualities are shown in the way he uses his body to make a point and his physical supremacy over his wife.

Juxtaposed to this is the representation of female gender through Elizabeth’s character. She is constructed as a rather cold, but highly moral woman. Elizabeth’s role in the home is to care for the house so John can relax whilst she waits on him. This is shown by how she begins to clean up the table as dialogue is established and how she serves John and does the dishes while he is comfortably seated. Thus her inferior status in this patriarchal society is established. The scene portrays the female gender as quiet, submissive and subservient, and a protector of the home from outer influences as we learn that she “sent Abigail on the roads” because of her sexual attraction to John.

Elizabeth is a fine example of the women in Salem. She is stoic, in keeping with the cultural expectations where any show of emotion is considered unseemly. She demonstrates the reserve that, as a woman, she has practiced all her life. This gender role is celebrated throughout the film. She is resigned, willing to accept the laws of her society however unjust which can be seen in the scene when she is arrested. Endowed as the home maker and nurturer, socially expected roles, her meek submissiveness highlights her strength of character as a wife and a mother.

This is done through the close up of her hugging her children before she is taken away. The film lauds her behaviour in this scene as quietly dignified, and her integrity is highlighted when she organises the care of her children and comforts them and hopes her husband will bring her home soon. Essentially, Joan Allen’s acting accounts for much of Elizabeth’s dignity, for the actress stands upright and faces her ordeal with confidence. Hence, the actions of an actor compliment the other filmic techniques that represent gender roles in the film.

Despite his patriarchal prerogatives in the household, Proctor’s status is eclipsed by the status of those involved with the theocracy, such as Reverend John Hale and Judge Thomas Danforth. Reverend Hale is portrayed in the traditional stereotype as a gentleman of intellect and authority. He acquires this authority through his unique knowledge of ‘the invisible world’. This can be seen in the scene when Hale interrogates the girls. His demeanour and dress linked with his patronising voice threaten the powerless girls, and establish his authority as a feared ‘expert’. The tilted camera angle looking up at Hale and down at the girls reinforces this power.

Judge Danforth represents another form of biblical power in the patriarchal society of Salem. He is the enforcer of law, one with absolute power over the individual, one who holds power over life and death. In the scene of his arrival, his importance and power is signified by the music with an insistent drum beat that is very loud. The camera angle looks up at the entourage showing soldier, carriages and horses charging into Salem to take control. The crescendo of music stops with a gong like sound as Danforth steps out of his carriage in medium close up with an upward camera angle. He is dressed very formally in black with a gold buckle standing out on his hat and stands in an upright and confident stance. These factors combine to establish Danforth as the stereotypical judge – an aged man endowed with wisdom and knowledge, but nonetheless with a hint of stubbornness.

Contrasting to all this is the representation of female gender. Women in the society possess barely any power at all, not even the right of freedom of expression. This is why they were dancing in the woods and ultimately triggering the whole episode of the witch hunt. It is no wonder why a girl like Abigail would seize her chance to enjoy her powers as “God’s fingers”. However this empowerment of Abigail, her unnaturally strong sexual attraction and her unwilling to be a submissive maid/housewife all works against social expectations of Salem and the film’s stance on being male and female – this establishes Abigail as evil and dangerous.

Apart from being represented as countering stereotypical qualities, she is also established as a manipulative whore. This could be seen in the scene where John and Abigail meet against the wall. Dialogue is used to represent Abigail as a seductress, “give me a sweet word John”. Music accompanies Abigail’s emotional state, simple, unmelodic and mysterious as Abigail tries to seduce John and becoming more melodic and threatening as Abigail grabs John’s crotch and harangues him to position Abigail as a more powerful figure. As Abigail and John start to argue, Abigail occupies the foreground and the centre of the frame. This framing positions her as an empowered female. All this contributes the film’s construction of Abigail as a resistant and countering role and a temptress.

In conclusion, Miller has used various filmic techniques to construct and represent gender roles as pointed out above.

Representation of Gender in the Film The Crucible. (2016, Jul 14). Retrieved from https://studymoose.com/representation-of-gender-in-the-film-the-crucible-essay 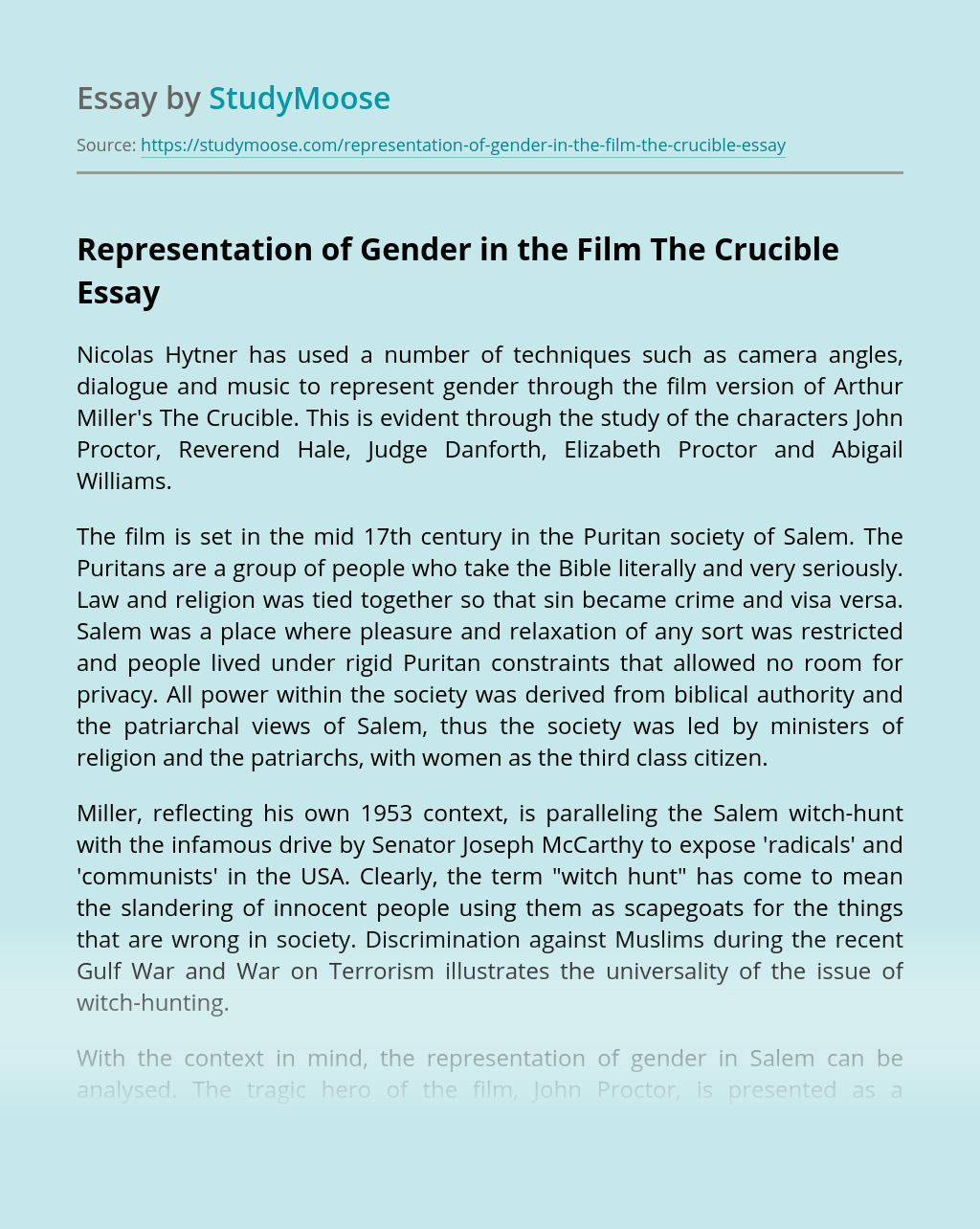 I had mixed feelings about the movie Good Bye, Lenin! While I enjoyed watching Alex run into new challenges and come up with new solutions in scene after scene I felt the movie became too long and repetitive. I do however think the movie succeeded as a comedy, and as a glimpse into the history... VIEW ESSAY

View sample
The Gods must be crazy film book analysis

The movie of the Gods must be crazy shows a blunt distinction among the cultures of the Bushmen and modern societies within communications amongst members from two very different cultures. There are many obvious differences in the characters actions, values and divergent worldly perspectives. This movie shows variations between anthropological culture and ethnocentrism. In a... VIEW ESSAY

Everyone has heard of ballet, some perhaps just that, while others practice it or just enjoy watching it on stage. Most people have also heard of Swan Lake, maybe even saw it performed in one or another adaptation, as there are many. Then there is Black Swan directed by Darren Aronofski, which leaves most other... VIEW ESSAY

Films constitute as the perfect example in communicating cultural identity, the elements such as character, plot, and script pose as effective tools for communicating the film’s message. Much of this can be attributed to the basic premises of culture and communication as two terms co-related in such a way that cultures will simply cease to... VIEW ESSAY

“The Breakfast Club” shows the typical stereotypes of before, specially the 80s. The snob girl that thinks she shouldn’t be there, the popular sports boy, the rebel that is not understood, the nerd that doesn’t want to be in trouble, the outcast that is ignored, and the teacher that thinks to highly of themselves and... VIEW ESSAY