Report on Textile Industry of Pakistan

The industry consists of large-scale organized sector and a highly fragmented cottage / small-scale sector. The various sectors that are a part of the textile value chain are: Spinning, most of the spinning industry operates in an organized manner with in-house weaving, dying and finishing facilities. Weaving comprises of small and medium sized entities. The processing sector, comprising dyeing, printing and finishing sub-sectors, only a part of this sector is operating in an organized state, able to process large quantities while the rest of the units operate as small and medium sized units.

Don't use plagiarized sources. Get your custom essay on
“ Report on Textile Industry of Pakistan ”
Get custom paper
NEW! smart matching with writer

The printing segment dominates the overall processing industry followed by textile dyeing and fabric bleaching. The garments manufacturing segment generates the highest employment within the textile value chain. Over 75% of the units comprise small sized units. The knitwear industry mostly consists of factories operating as integrated units (knitting + processing+ making up facilities). The clothing sectors both woven and knits are mainly clustering in Karachi– Lahore and Faisalabad where sufficient ladies labor is available.

Pakistan is the world’s 4th largest producer and 3rd largest consumer of cotton.

The Textile and Clothing Industry has been the main driver of the economy for the last 50 years in terms of foreign currency earnings and jobs creation. The Textile and Clothing Industry will continue to be an important engine for future growth of the economy; there is no alternative industry or service sector that has the potential to benefit the economy with foreign currency earnings and new job creation, especially if synergy is developed amongst different sub sectors and efforts are made to aggressively grow the Ready made Clothing Sector.

Pakistan’s Textile Industry had proved its strength in global market during the last four decades. It has proved its strength even in post quota era by not only sustaining its position but, also showing growth during 2005 to 2007, but declined to $11. 1 billion in 2008 due to financial and economic melt down globally. The Garment Sector & especially the Knit Garment Sector need special focus in future policies. 2 Report on Textile Industry of Pakistan Table 1. 1: Export of Textile and Clothing (Us $ millions) Global developments:

The Textile & Clothing trade has increased; from US$ 212 Billion in 1990 to US$ 612. 1 Billion in 2008. The clothing trade is growing at a faster rate. Pakistan exported textiles worth $7. 19 Billion and clothing worth $3. 9 Billion in 2008. The year 2009 was dismal period. The industry was confronted with problems of multiple natures. The global economic crisis in Oct. 2007 had impacted the trade badly. Weaker demand in the developed economies limited the expansion of global trade. The 12%drop in the volume of world trade in 2009 was larger than most economists had predicted.

World trade and output are currently in a recovery phase. The WTO Secretariat estimates that in year 2010 world exports in volume terms will grow by 9. 5%, developed economies’ exports will expand 7. 5% and the rest of the world (developing economies plus the Commonwealth of Independent States) will advance 11%. The decline in exports of all manufactured goods including Textile & Clothing is visible in the quarterly data. Table 1. 2: Quarterly growth in world trade in manufactures by product, 2008 Q1 – 2009 Q3 (Y-o-Y percentage change in current US dollars)

The period of heavy investment boom in most Textile Industry segments between 2003 and 2007 came to an abrupt end in 2008. This investment boom until 2007 was due to the phase out of traditional quota regime under WTO – Agreement on Textile and clothing and China’s integration into WTO structures. Global yarn and fabric productions were continuously falling since the second quarter of 2008. While one was expecting stabilization in production and hoping for a slight increase, the strong rebound in yarn and fabric production in almost all the regions came as a real surprise.

The reasons for this strong rebound are higher production in Asia and South America, driven by a large demand from Europe and China and Brazil. Today the big question is whether the recent recovery in Textile Industry will continue? One can be pragmatic to identify the positive moves in Textile Trade. Firstly the production of yarn and fabric are constantly on rise in Asia (China, Pakistan and India) as well as in South America. This positive trend is supported by global exports of clothing.

After having fallen from more than $30 billion per month to only around $20 billion in May 2009, an upswing of global clothing export of approximately 20 percent to almost $25 billion was recorded in June 2009. Despite 3 Report on Textile Industry of Pakistan challenges, there are fundamental aspects that promise a bright future for the textile industry in general. Domestic Overview: Internally the increase in cost of utilities, (Power, Gas, Transport, and Petrol) has impacted viability. The power & gas outages have further deteriorated capacity utilization.

The shortage of cotton crop in China increased the prices of cotton. The increased demand of yarn export created problem of yarn availability in the local market. The increase of cotton yarn and cotton yarn prices for exporters of Garments, Knitwear, Home Textile and made-up sectors to unviable level aggravated the production and export of yarn products. To stay in the market industry is making distress efforts. Closure, low capacity utilization, losses are heated topics of the day. Resultantly the production and export performance of Textile sector had shown a mixed trend.

Because of a global shortage in availability of cotton, largely due to a shortfall in Chinese crop, which is the biggest producer and consumer of cotton in the world, the foreign demand for Pakistan’s cotton yarn has risen exceptionally. Chinese, in particular, have procured huge quantities of yarn from Pakistan, even though they are the fiercest competitor of Pakistan in the world market. In the first six months of the current fiscal year Jul-Dec. 2009, the export of cotton yarn recorded an increase of 50%. Spinning industry makes the basic raw material for the downstream industry.

The existing capacity in the spinning sector is more than local demand, and hence moderate quantities of yarn are exported each year. With excessive exports during the year, the downstream industry started facing severe shortages of yarn. Consequently, the downstream industry began to close down. In January, 2010Government imposed a quota of 50 million kg per month for export of yarn. During January 2010, 56 million kg was exported as appropriate measures to give effect to quota were not put in place in time. The availability of yarn in the local market remained scant and prices kept rising.

The anxiety and pain suffered by the local industry intensified, as exports of value added textiles were declining at alarming rates (Decrease in: Cloth 16%, knitwear 8% and garments 8%). Accordingly, the quota was reduced to 35 million kg per month with effect from 1st March, 2010. Since the reduction in quota, local availability has improved. Textiles are exported in the form of Yarn, Fabric, Readymade Garments, and Bed Wear & Made Ups. Export performance for the period 2008 09 (Jul Mar) to 2009 10 (Jul Mar) is compared in table Export Performance of Textile Industry:

Report on Textile Industry of Pakistan. (2018, Jun 20). Retrieved from https://studymoose.com/report-on-textile-industry-of-pakistan-essay 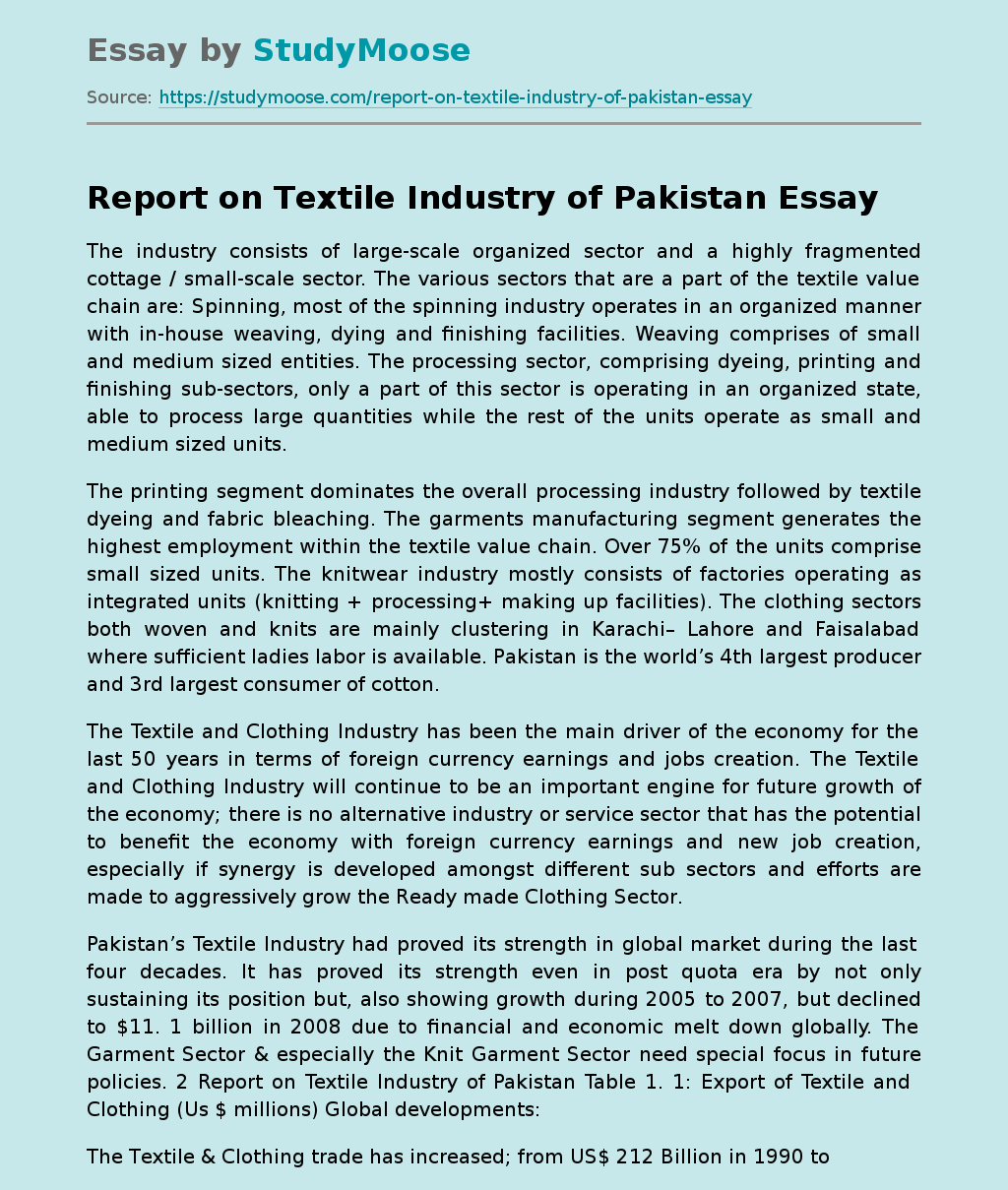