Advantages and Disadvantages of International Trade

Textile industries are significant segment, which distinguished country’s success by which nations establish to accomplish its respective aimed goal. International trade of textile is the exchange of textile between countries. The trade of textile contributes to the economy of the world.

In which the prices of textiles, and their supply and demand, that affect and get affected by global events. Trading textiles globally provide countries and consumer the opportunity to expose to services and goods not available in their own country.

Don't use plagiarized sources. Get your custom essay on
“ Advantages and Disadvantages of International Trade ”
Get custom paper
NEW! smart matching with writer

Almost every quality of textile can be found in international trade. A textile that can be sold in the global market is called as an exporter, and textile which can be bought from the global market is called as an importer. Export and import are accounted for current account of country’s in the balance of payment When there is no trade between the rest of the world and China

Exporting means manufacturing goods or services within the country and trading or selling them to another country.

Whereas, importing means the acquisition and sale of services or good from acquired from another country and selling those acquired good within the country. If there is no trade activity between China and the rest of the world, i.e. import and export of product or services, then in this case there will be no importer or exporter of textile as there is no such activities between these two countries. Since, the prices of textile in china are lower than the textile price, which are offered in the rest of the world. China has capacity for improvement as its improving living style, bringing increased demand in both quality and quantity of textile product, and its manufacturing process is cheaper as compared to the rest of the world. Also, there will be no effect over the price of textile in China and the rest of the world. Because both of them are selling the textile domestically to their local consumers.

When the trade is allowed to take place freely between the two countries, then import and export activities take place. China and the rest of the world will be able to sell its textile globally enabling them to import and export textile. The textile industry serves as a pillar of China’s economy due to the factor endowment and market scale. The competitive advantage of Chinese textile industry as compared to the world is their cheap labor cost and their technology. China’s textile industry display obvious scale economy and possess cost effects in supplying of material, labor cost, quality of product, compatibility between down and up stream, which pay for its dynamic export competitive advantage. However, the abolition of textile quotas in 2005 is helpful for textile sector in china to win access to foreign market, and helpful in constructing the opportunity for scale expansion and industry upgrade. The second main advantage of globalization in china is due to the superiority of China in material supply.

China is the world largest producer of cloth, cotton, natural fiber and yarn due to the status of her superiority in resources and agriculture. Whereas, the richness in natural fiber and growth in the chemical fiber sector brings superiority advantage for the Chinese textile industry as compared to those developed countries. Comparison of china textile industry as compared to the developed countries. China’s textile industry is largely curtailed from comparative advantage in natural resource endowment and advantage in labor supply. Due to the integrated industrial chain and cheaper labor cost, the textile product of china is most competitive and main exports. However, the developed countries’ advantage in textile lies in the R&D, brand and matured marketing channels and abundant capital, which is the expensive resources as compared to Chinese traditional resources. As China is a major consumer and producer of textile product.

It has a great potential in consumption and production opens a vast market of medium and textile, textile machinery from developed countries, which results in advance interdependence among textile industries on both sides. As the production of Chinese textile industry is comparatively lower than those of developing countries. The production process of the USA is mainly concerned with high wages of employees, high research and development cost, and excess cost of the advertisement, as compared to the cost incurred by the Chinese.

The introduction of China into the global market will cause the prices of the textile to decrease because of the above factors. Thus increasing the competition in the industry and pressure exerts by the US consumer over their textile industry to lower the prices in order to remain in the market. In this way China will enjoy the benefit more than the developed nation due to its competitive advantage as other developed nations, including the USA will face loss in a form of expenditure incurred and high cost of textile as compared to China. This loss can result in a decrease of profitability or list of customers.

Free trade is a policy made by international markets in which government of the country does not restrict imports and export. Free trade can be exemplified by the European union and the North American Free Trade Agreement, which is created to establish open markets. However, most of the government in order to protect local employment impose protectionist policies that are intended to support them, such as subsidies to export or applying tariffs to imports. Most of the economist is in favor of free trade. Free trade improves lives of people’s. Through it each person can specialize in what they do best. Free trade promotes competition in the supply of services and goods, which results in motivates people to develop better, less expensive services and goods.

Policy-makers have learned how important is freedom to trade in order to improve and increase the welfare and standard of living. According to the world trade organization, the applied tariff in the developed countries has fallen by 10% in 1980 to under 5% per day. Due to the fall of these barriers, the flow of trade has increased dramatically. The removal of trade barriers, particularly in some fast moving economies enables more than 500 million people to lift themselves up from the poverty, including 400 million in china and million of people in india.

Independent nations negotiate trade agreements, which are in their own interest and value in mind. Other than maximizing the global output level, there are values and interest among the independent nations. Following are the reasons why it is hard to achieve the free trade. International trade required more resources to distribute, as delivering products on the other side of the world has an environmental impact because it uses fossil fuel in delivery from overseas, as compared to local delivery. Economic disruption will also produce by the shortage of fuel energy and increase in fuel price as it is a finite resource that is being depleted.

The influence of foreign firm will be made in developing countries, in subsidizing local corporation offers accusation of Protection by free trade advocates, while businesses to foreign corporation are portrayed as a mere balanced incentive. Free trades are opportunity to dominate the market by the developed countries, only developed countries can take advantage of it. But developing nations, it undermines their relative advantage. Developing countries solely focus on elementary and simple industries, because their comparative advantage is always a cheap labor. They are concerned that they may keep suffering at the root of international division of labor if they bear by the static principle. 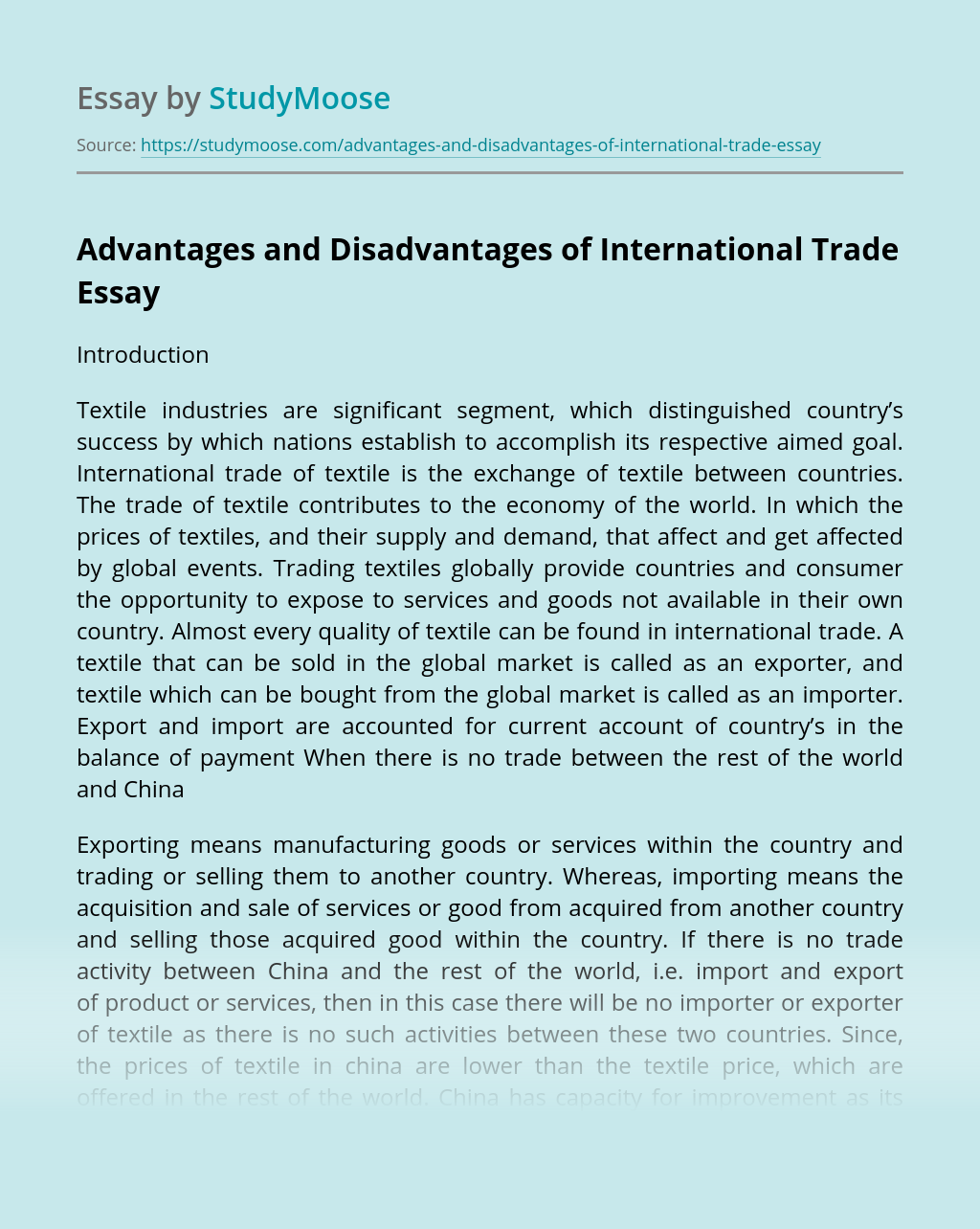