Repetition in Waiting for Godot

“I can’t go on like this”, with this last phrase Waiting for Godot ends. Although it might not seem a lot by itself, when reading the whole play it is possibly to understand about what is the character of Estragon talking about. He and Vladimir have been waiting for a person called Godot to come and meet them, and as the first act of the play shows they have been waiting for a while and they pretend to keep waiting for him, even if he does not shows up for days.

Don't use plagiarized sources. Get your custom essay on
“ Repetition in Waiting for Godot ”
Get custom paper
NEW! smart matching with writer

This play is strongly based in the repetition of their routine and patterns of each one of them.

A sign of repetition is that every time Estragon tells Vladimir that he wants to go, the latest has to remind him that they can’t because they are waiting for Godot and Estragon’s answer is always “Ah! ”, this happens four or five times. Estragon also goes back to the idea of committing suicide in the tree that is near them a few times and Vladimir has to explain to him why they cannot do it.

Proficient in: Waiting For Godot

Both acts also start in a similar way. Estragon is already in the stage, whereas Vladimir is just getting there and they are both glad to finally be reunited.

They also talk about what they did the day before. Both times Vladimir remembers that they were in the same place waiting for Godot, but Estragon does not. Repetition is also found in little details like the nicknames that both have to each other. Vladimir is called Didi and Estragon is called Gogo. Both of the nicknames consist on the repetition of the same syllable.

Is a representation of what they have been doing for a couple of days. They are in a circle and although this situation has an end, it does not seem that their waiting is going to end any time soon. They are living in a circle. Although different things happen to them during the different days in which they wait, overall they act in a similar way. Always waiting; always fighting, missing each other and reuniting; always thinking about what to do next; always thinking about what are they going to do tomorrow.

Repetition in Waiting for Godot. (2016, Sep 14). Retrieved from https://studymoose.com/repetition-in-waiting-for-godot-essay 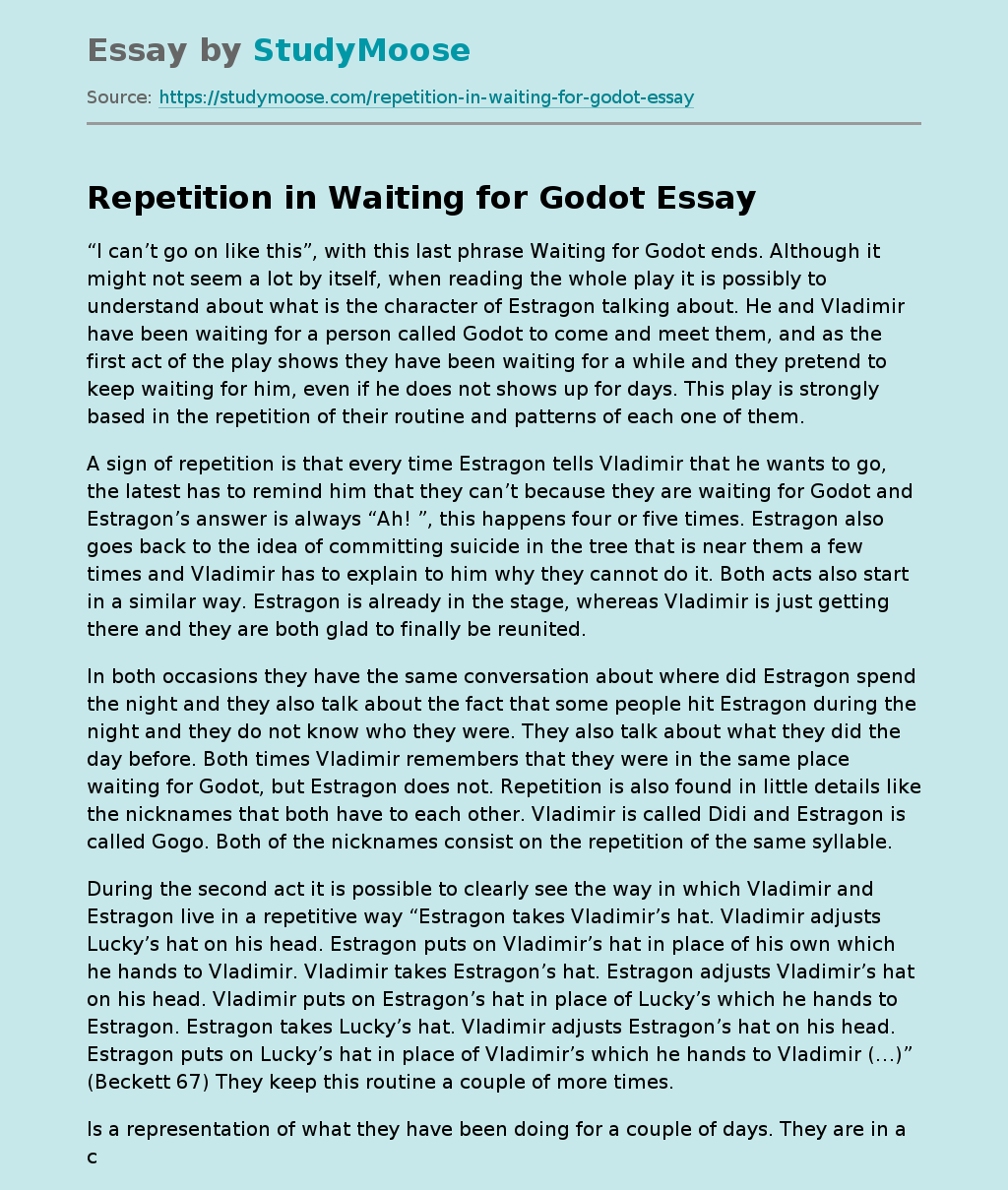